The Leeks Vinaigrette Salad in hollandaise is a popular complement to the assorted poultry dishes, which include rotisserie and whole bird offerings.

Most 71-year-old French chefs who have earned three stars from Michelin are contemplating retirement and maybe retreating to a summer place in Monte Carlo or Nice. But not Antoine Westermann. He earned his three stars at Le Buerehiesel in Strasbourg, France. He turned that operation over to his son, Eric, in 2007, but continues to operate four eateries in Paris, including Le Coq Rico.

Rather than resting on his laurels, Westermann also opened a version of Le Coq Rico in New York City’s Flatiron district in 2016, within walking distance of Union Square Café and Gramercy Tavern. 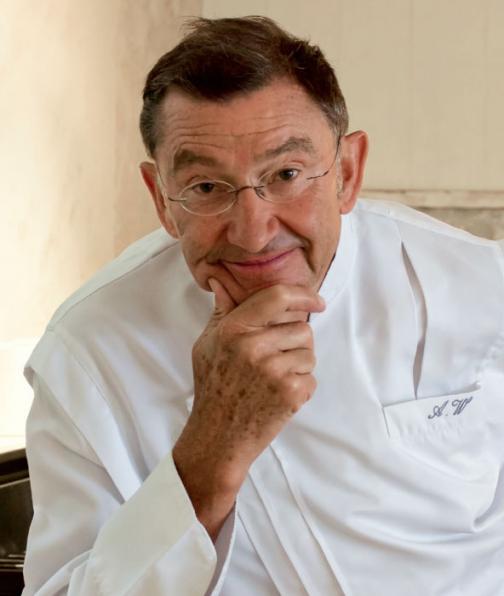 Chef Westermann’s French heritage unfolds across the menu, from an offal platter with roasted chicken liver on Horseradish toast to a poultry burger to the classic L’Ile Flottante, a soft meringue and Créme Anglaise.

He acknowledges that his business partner, Francis Staub, who operated Staub cookware, played a major role in this transcontinental endeavor. “I couldn’t have opened it without him. It costs a lot of money to open in New York,” Chef Westermann says.

Sounding rejuvenated and reinvigorated, Westermann is ebullient about cooking in New York City. “In France, it’s my own country. Here, I learn something every day; this is better than being retired,” he exudes.

Specializing in chicken and fowl, Le Coq Rico provides a respite for Westermann from the intense, complex cooking of his Strasbourg cuisine. “When you cook in a three-star restaurant, it’s not the same as when you cook chicken every day. With a three-star, you have to create something new every day,” he explains.

The bespectacled Westermann wears a white chef’s shirt, has a self-deprecating sense of humor, and likes to refer to himself in the third person as “the chef.”

“Customers in New York like to talk directly to the chef,” he says, referring to himself.

The 3,340-square-foot eatery accommodates 95 people and employs a staff of 60. For guests, it offers a 25-seat kitchen counter, a spot designed for clientele to watch the poultry roasting on the rotisserie, and a separate bar area that serves hors d’oeuvres and small plates.

Westermann has assembled a crackerjack team including executive chef Guillaume Gunter, who cooked at restaurant Daniel, and general manager Anthony Battaglia, the grandson of André Soltner of Lutèce fame in New York City.

Before his latest restaurant opened, Chef Westermann spent a year familiarizing himself with various farms in the Hudson Valley and the Amish country, in order to select purveyors that would provide the best free-range chicken to fit his meticulous standards.

Pete Wells, the New York Times dining critic, gushed about the food at Le Coq Rico in his June 14, 2016, review. Wells described Westermann’s chicken as “moist but not drippy or briny; compact and muscular but not tough; long on deep, rounded flavor that didn’t seem to rely on salt or sugar.”

Westermann is known for serving aged chickens raised for longer periods than the industry norm. Wells noted that the industry standard is serving poultry raised for 40 days and then slaughtered, but Westermann prefers his birds to have lived 90 to 120 days, so they’re ripe and moist.

The chickens that live 90 to 120 days are bigger, more robust, and—arguably—tastier. “When chickens are too young, it doesn’t taste right. When they’re older, it tastes better,” he says.

Westermann describes the preparation of his beloved chickens in the following way: “When I cook the chicken, my secret is this: Before having the chicken on the rotisserie, I put it in chicken stock and cook it slowly, very slowly. And then I take the chicken out of the stock, put it back in the rotisserie, and roast it again.”

Several types of fowl are served on Le Coq Rico’s menu, including duck and guinea fowl. The ducks and guinea fowls, like the chickens, are allowed to live longer and slaughtered at a later date, so that, in Westermann’s view, they “taste better. The duck tastes like venison.”

While there are some seasonal differences in vegetables and other items, the menus at Le Coq Rico in Paris and New York are comparable.

“What would be nice is if we served two kinds of chicken, French chicken and American chicken, on both menus, but that’s not possible,” he says.

Asked to pinpoint his target audience, Westermann is reluctant to answer. “We have all kinds of customers, young ones and elderly ones.” The average dinner check ranges from $40 to $60 per person. For $96, a table of four can split the whole chicken plus have a salad and order sides.

His New York clientele lets him know their likes and dislikes. “They tell you if something isn’t what they expect or if they don’t like it. They tell me the truth,” he says succinctly.

Since Le Coq Rico debuted, he’s been spending about six months in New York and six months in Paris, shuttling back and forth every three weeks or so.

When he returns to Paris, he’s energized. Nonetheless, he says to his wife, “When do we buy a ticket for getting back to New York?”

Asked if he’s prepared to open a second Le Coq Rico in another neighborhood in New York or elsewhere, Westermann deflects the question. “I don’t often project one year or two years in the future,” he replies.