Rooster Soup Co., a luncheonette serving soups, salads, and sandwiches, gives every diner a chance to pay it forward since all profits are donated to help feed the needy.

Michael Solomonov, Steve Cook on Paying it Forward in the City of Brotherly Love

We were throwing out 500 to 1,000 pounds of chicken carcasses a week at Federal Donuts. There had to be some way to put it to good use. What does anybody do with chicken bones? Make soup with it.
September 2017 Michael Solomonov and Steve Cook

Guys on the go: that would be Michael and Steve. Chef Michael Solomonov was about to take one of his frequent trips back to Israel, where he still has family and where he’d love to open a Federal Donuts, and the entrepreneurial-spirited Steve Cook was walking from Rooster Soup Co. to Dizengoff, as he shared that what he really likes is “the restaurnt openings, and conceiving new things.” Precisely what they’ve done in a two-block stretch of Philly’s Center City where they have five restaurants. Here, Cook tells the story behind Rooster Soup Co.: 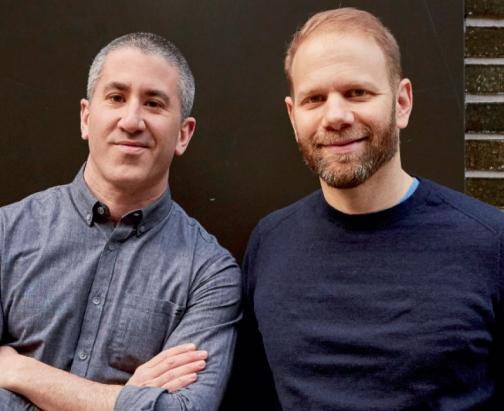 Most Enjoys: Working with his hands.

Because: Doughnuts and fried chicken are nostalgic, like jelly doughnuts at Hanukkah.

A Great Idea that Wasn’t

There’s this wonderful nonprofit, Broad Street Hospitality, that serves like 75,000 meals a year to Philadelphians who are homeless or hungry. So we suggested: Why don’t we make soup from all those chicken bones, give you the soup, and you can feed your guests? And they said, “Thank you very much, but we’re not a soup kitchen and we really don’t want to reinforce the negative stereotypes of soup kitchens as a cold, impersonal place where someone slops food on your plate and sort of pushes you along.” What they’re really about is building community, and rebuilding the person’s social fabric that they’ve lost. Feeding them is one way to do that, but they’re really trying to establish relationships.

Then we came up with this insane idea to open a restaurant that sold soup to people like you and me, and the restaurant profits would go to Broad Street. Rooster Soup Co. opened in January, and if we can turn this into a sustaining revenue source for Broad Street it will be huge financially—and it will also engage  people who want to help fellow citizens.

A Flock of Followers

We raised money on Kickstarter, over 1,500 people contributed, so we opened with a community of supporters. We run Rooster Soup Co. just like our other restaurants, all of the employees are paid professionals the only difference is that the profits support the mission.