For Joseph and Jenna Cuccia, it's Small Plates and Big Dreams

Lodi, New Jersey, a small borough squeezed in between Hackensack and Garfield, is not exactly known as a hotbed of culinary invention. Diners tend to prefer cuisines with which they’re familiar; you don’t have to walk far to find any number of Italian spots. It was this formulaic type of dining that Joseph and Jenna Cuccia, the brother-sister owners of 17 Summer, aimed to eradicate when they switched to a small-plates menu earlier this year.

The journey to this revamp was far from easy, however. When the duo first opened the restaurant in 2015, their main goal was not to expand their customers’ palates, but simply get them in the door. “It was fine dining, but it was playing to the public in the sense of, ‘OK, we need to make sure this is approachable; make sure that these are things that people understand and they know,’” Jenna says. 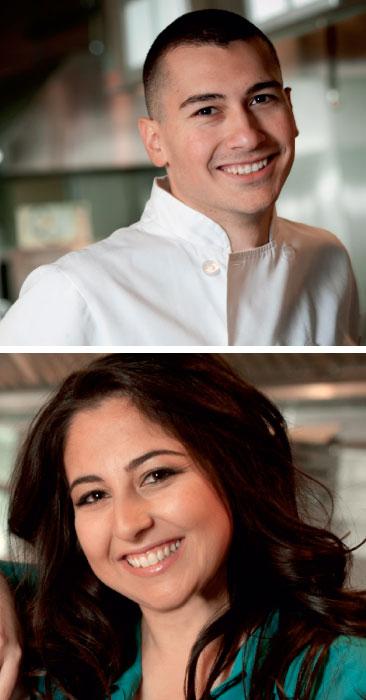 But that fine-dining menu, which featured more quotidian items like red snapper with broccoli rabe, did nothing to excite the siblings’ creativity. “It was technically sound, but it’s still fish with broccoli rabe,” Jenna says. “We were serving things that were just not us, and it felt so inauthentic, really.”

To reignite their culinary imaginations, Joseph, the executive chef, began hosting chef’s table dinners bi-monthly, a practice he had started back when the siblings only used the restaurant space as a catering kitchen.

“It was a creative outlet,” Jenna says of the dinners. “We could bring in these different ingredients and serve smaller plates.” National critics began to take notice: Joseph was nominated as a semi-finalist for the James Beard Awards in the Rising Star Chef category in 2016 after the restaurant had only been open for seven months. “We were shocked and screaming; how did anyone find out about us? We thought it was a joke!” Jenna says.

The attention also brought about a fortuitous meeting. One of the area’s foremost foragers dropped by the restaurant one day with bags loaded down with many varieties of rare herbs and plants and encouraged Jenna and Joseph to just play.

While the Cuccias have always been committed to crafting their menu in-house, these unusual plants challenged them to fashion even more innovative dishes. One of their favorites, an herbaceous perennial plant called stinging nettle, at first confounded them, but they have since grown to adore it. It makes frequent appearances on the menu folded it into pasta or even made into a jam.

“My guests will ask, ‘What do you have that’s foraged?’ So, it’s a nice camaraderie that’s happening,” Jenna says.

Using foraged or unusual ingredients is certainly a badge of honor for 17 Summer. But as the Cuccias renewed their focus on incorporating the ingredients into their menu, it also necessitated a change in portion size.

Ostrich hearts and spruce tips, two of the siblings’ favorite ingredients, can’t exactly be scaled up and served as main courses to hundreds per night. The solution was again found in the chef’s table preparations: Smaller plates meant less of an ingredient was needed, with the happy corollary that each guest could also taste more dishes per visit.

The restaurant, which has always been committed to serving seasonal ingredients, has historically changed its menu every six weeks. With the previous coursed-out menu, “people felt like they needed to try everything in one visit,” Jenna says. “And that was concerning to us because we really needed them to come more often.”

By switching to small plates and lowering the prices, the duo was able to attract a much wider audience, from millennials to Baby Boomers. “The volume of customers just skyrocketed, because you were hitting another market,” she says. “We want to be approachable to everyone who likes food and everyone who wants to eat well. And that wasn’t necessarily what we were hitting in our previous price point.” Guests are also returning much more frequently than every six weeks, which further validates the siblings’ decision to eschew most of the larger plates.

But for the Cuccias, being approachable never meant dumbing down a dish or an ingredient. Even in their earliest days as street fair merchants (where they hawked under the delightful name Come Fry With Me), they still served elevated European snacks like porchetta sandwiches and Belgian-style frites.

Now, with 17 Summer’s shareable plates, they’re still introducing guests to unique flavor combinations or unusual cuts of meat. Take, for example, the aforementioned ostrich hearts, which are a rare find on any menu, let alone in suburban New Jersey. “We’re never afraid to butcher anything in-house and see where it goes,” Joseph says. “I’m very big on using the whole animal and respecting it in its entirety.” It seems the restaurant’s guests are also fans of this philosophy; the Cuccias ended up buying out all the hearts available in order to satisfy guest demand.

With the change to small plates just a few months old, the siblings are aware that they’ll have to navigate more challenges, from adjusting prices to continuing to attract new customers, but the restaurant’s success thus far has been extremely gratifying.

The siblings are drawing in customers with food that’s cooked on their own terms: locally-sourced, classic preparations, “just with a little more forward-thinking ingredients,” Jenna says. “To be able to provide that service and food that that many people enjoy is so wonderful.”