How a Star Chef is Reinventing the Columbus Dining Scene

David Belknap was just 14 when he started washing dishes at Brookside Country Club in Columbus, Ohio. It wasn’t the most glamorous job, but Belknap quickly found himself smitten with the restaurant industry. Because the city didn’t hold much for him in the way of honing his culinary craft, he left to pursue his passion by attending the Pennsylvania Culinary Institute in Pittsburgh. Upon graduating, he refined his skills across the country, before landing in New York City under chef Thomas Keller at his three-star Michelin rated Per Se. After two years, Belknap opened his own restaurant, L&W Oyster Co., which he operated for four years. 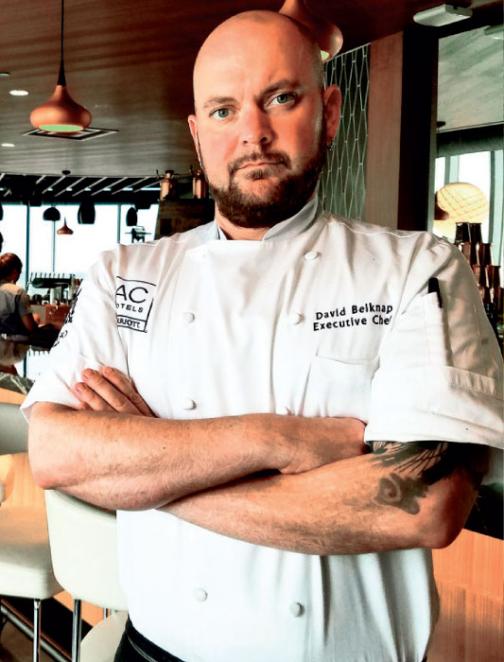 Now 38 years old, Belknap has returned to his hometown to raise both a family and some excitement in the Columbus dining scene. He’s the executive chef at VASO, in the AC Hotel by Marriott Columbus Dublin, a Spanish-inspired tapas restaurant and lounge.

How does VASO fit into the Dublin community and dining scene?

We definitely push the boundaries of a typical tapas bar. Due to the number of guests we draw during patio season, we have to be able to serve a large amount of food and drinks in a short period of time, which limits the opportunity to execute very elaborate plates.

VASO’s big city vibe and style has attracted crowds of diners clamoring to enjoy our scenic rooftop during warmer months. It was difficult last season—our first in business—because no one had any idea how incredibly busy we’d be. We nearly doubled our forecasted sales in the first six months of being open, so I guess Dublin was ready for a product like this. And the growing local dining scene has definitely evolved as a result.

What’s it been like to return to your hometown after years in New York at world-renowned restaurants?

When I left Columbus 17 years ago it was because I didn’t feel the city had enough of a culinary scene to keep me motivated. I always wanted to come back home after a few years and push the dining forward. Back then it was all chains, Maytag blue cheese on potato chips, and giant portions of greasy regional fare. Today, I’m seeing a lot more independent restaurants and kitschy bars. More people are willing to embrace the indie spirit and try things they’ve never heard of.

How have your travels influenced the menu?

The time I’ve spent traveling in Mexico, Puerto Rico, Brazil, Thailand, and all around the United States has given me material to draw upon when designing new dishes. That’s why I didn’t chase titles for most of my career. I would rather be a commis cook at a three-star Michelin restaurant and learn something than be an executive chef of a country club where I had to make chicken marsala and prime rib the rest of my life.

You’ve owned a restaurant and are now an executive chef. How do the two roles compare?

Being part of L&W Oyster Co. in New York taught me to scrutinize every detail of the operation. From the cost of paper towels to the marketing to the paint and maintenance of the building, everything was my concern. Now being executive chef for a hotel and restaurant, the burden of all the other parts of food and beverage is lifted. I can focus mainly on the food and trust that the rest of my team at the hotel is handling their business.

I like playing with varying textures, colors, and flavors. For example, one of our newer dishes includes a grilled asparagus niçoise with a soft-boiled egg, crunchy olive crumble, leathery oven-dried tomato “raisins,” and sweet candied Meyer lemon zest. I’m also doing a cold smoked tuna ceviche where the tuna is drizzled with a carrot-ginger lemon juice, then garnished with pickled tricolored baby carrots, soy-poached beech mushrooms, and basil oil. The result is an incredible display of color combined with varying textures and flavors.

What’s the deal with the outdoor igloos at VASO?

Our general manager, Orcun Turkay, got the idea from the Marriott AC Boston. At first everyone was skeptical that it would work, but we put in some sexy LED lighting, space heaters, and faux fur blankets. As more people visited the restaurant, the interest grew and we had them completely booked three months out in just three days. Sadly, they had to come down in preparation for our spring patio opening. But they’ll be back next season.