How One Chef Made Regional Mexican a Critical Success

Claudette Zepeda-Wilkins is educating guests at her San Diego restaurant El Jardín about the richness and diversity of Mexican food.
April 2019 Juliet Izon

“You know, onions aren’t from Mexico,” chef Claudette Zepeda-Wilkins says during a discussion of what constitutes traditional Mexican food. “And so, by that theory, a salsa shouldn’t have any onions in it; it should only have tomato and chiles.” But if one keeps unspooling that argument, “all the ingredients that we know to be in our cuisine really came from other people. It came from tragic instances where we made

lemonade out of shitty situations that we were given. Pardon my French,” she adds. The point is, she surmises, “all of Mexico is fusion.” 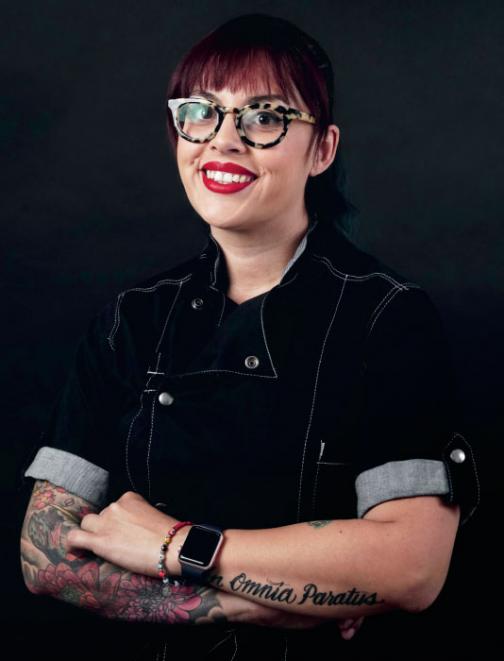 Kitchen tool you can’t live without: Slotted spoon.
Favorite person to cook for: My mom and my kids.
Favorite ingredient right now: Sunchoke.
Last thing you read: The Taste of Mexico by Patricia Quintana.
Favorite way to destress outside the kitchen: Sit at home and watch “The Marvelous Mrs. Maisel.”

Zepeda-Wilkins, executive chef and partner of El Jardín in San Diego, hopes to spread this knowledge to every customer who walks into her cheery, colorful space in Point Loma.

Mexican food is not just tacos or enchiladas; it is rich mole sauces, creamy, decadent arroz con leche, and sharp, pickled vegetables. It is also hard to define: each of the country’s nine major regions is home to endemic cuisines that range from the moles of Oaxaca to tropical fruits from the Yucatan.

Zepeda-Wilkins’ menu, which changes weekly, aims to explore nearly all of them.

The idea for El Jardín’s menu began percolating when the chef was a contestant on Top Chef Mexico in 2017. “It was an eye-opening experience when I was filming and saw the capabilities and the variety that we had at our disposal within our country,” she says. “So, I decided to cook Mexican food: to really embrace it and learn basically everything that I could, as fast as I could.” To bring her vision to life, Zepeda-Wilkins partnered with Rise & Shine Restaurant Group, where she had previously worked as a consulting chef for the company’s new ventures.

The restaurant, which opened in June 2018, was one of the buzziest projects of the year, with food news site Eater billing it as one of the country’s most anticipated openings. Glowing critical reviews soon followed: The San Diego Union-Tribune hailed it as “comida chingona” which translates, roughly, to badass cuisine. Zepeda-Wilkins prefers her own term: grandma chic.

What does that mean, exactly? “Sort of ugly, delicious. Your grandmother wasn’t focused on what it looked like; she was focused on what it tasted like,” she says. “I always think, ‘What would my grandmother say if I handed her a plate with a bunch of garnish and micros and hid the food?’ She would just peel it off and tell me to get over myself,” she laughs.

Zepeda-Wilkins draws a lot of inspiration for her menu from her family, in fact, who are both stateside and in Mexico. The chef, who was raised in the U.S., grew up spending nearly every break from school with her grandmother and relatives south of the border. “When I land in Guadalajara, it’s where I feel most whole,” she says. “As soon as I get there or Tijuana, I’m in the market; I start moving around. I feel like it’s more natural to me to be there.”

But Zepeda-Wilkins is classically trained in French cuisine and also travels the globe to expand her palate. The result is a cuisine that is Mexican foremost, but influenced by changing landscapes both locally and globally. “If I only cook the food we ate in Mexico in the ’80s, well, that’s not the food that we eat in Mexico now,” she says. “[I want to] educate people on how diverse Mexico can be and move the cuisine forward at the same time.”

To wit: one of her current favorite dishes on the menu is the vegetarian enmoladas: tortillas slathered in mole sauce. In this meatless rendition, the house-made tortillas are stuffed with a root vegetable mix (sunchokes, sweet potato, and carrot) that has been tossed in a pumpkin seed sauce. Then, the whole dish is drenched in a silky plantain mole and sprinkled with crema and an aged cotija cheese that the chef imports from Michoacán.

Other dishes have a more personal connection, like her faithful rendition of the beloved Mexican treat of churros. “I wanted to nail the texture of the border-wait churro,” she explains. “When you’re sitting at the border from Tijuana to San Diego, there are food vendors that roll up to your car [with them]. It’s a very specific crunch, and it’s very hard to explain unless people experience it. Six months later, I think we’ve landed on the perfect texture.” The crispy-until-the-last-bite pastry is served with a decadent goat’s milk cajeta caramel sauce. It receives an added kick from a splash of white wine from, of course, Mexico’s wine country: Valle de Guadalupe.

El Jardín is, no doubt, a critical success, but Zepeda-Wilkins is not resting on her laurels. She and her team are constantly striving to fashion a menu that simultaneously remains faithful to its Mexican roots while pushing the limits of contemporary interpretation of the cuisine. It is this commitment that will hopefully ensure the longevity of the restaurant. “I have a collection of Champagne bottles that are not being opened until we make it to two years,” she says. “This industry is hard, and I’m incredibly lucky to be open this long. I count my blessings every day.”