"Our approach is that everything is as important as the red meat," says Charlie Palmer of his restaurants.

How Charlie Palmer is Keeping the Classic Steakhouse Alive

One of the industry's top chefs talks about his steakhouse empire, how he got there, and what's still to come.
April 2017 Gary M. Stern

It takes more than quality meat these days to run a successful steakhouse, suggests chef Charlie Palmer. And he ought to know. He owns four Charlie Palmer Steaks in New York, Las Vegas, Reno, and Washington, D.C., with a fifth on the way this summer in Napa, California. The New York steakhouse moved in February 2017 into the Archer Hotel in the Garment District, not far from Times Square.

Recognizing that tastes have changed, Palmer described his eatery “as a take on the modern American steakhouse. Our approach is that everything is as important as the red meat. People can eat a great piece of fish or something light. Does everyone coming into a steakhouse want to eat red meat?”

Indeed an April 2017 report by the National Resources Defense Council based on U.S. Department of Agriculture’s statistics revealed that “Americans reduced their beef consumption by 19 percent between 2005 and 2014.” 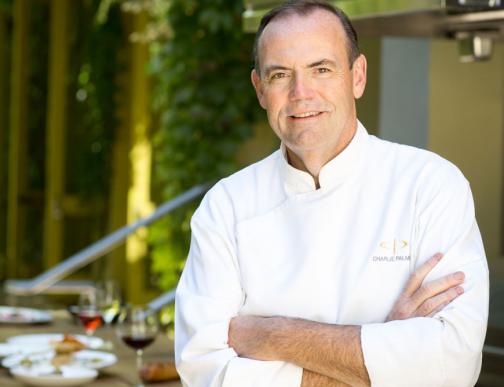 While many guests gravitate toward a “rib-eye, a porterhouse or a strip, many are focused on healthier, lighter options,” he says.

In fact, Palmer adds, “half of our menu is fish, pasta, poultry, and seafood.” For example, the menu highlights seafood dishes including scallops with confit pork belly, tuna tartare and halibut served with morel mushrooms and duck fat potato. Home-made pasta resonates in New York, and lunch salads score in Washington, D.C.

The lighter menu is also demystifying the steakhouse as an “all boys’ club beefsteak where men gathered in private clubs,” he acknowledges. Steakhouses still carry that stigma but the lighter dishes are helping change the stereotype and appealing to more women.

The décor matches the changing clientele. Palmer described it as “female friendly. It’s not a He-Man atmosphere with smoky walls, but a very contemporary feeling with great sound.”

While many steakhouses are known for their classic cheesecake dessert, never content to dwell on the expected, Palmer has concocted a variation of it. “We do a twist on cheesecake; it’s a cheesecake pudding. In New York, we offer a killer sticky bun and also offer home-made ice creams,” he says.

Palmer’s initial steakhouse opened at the Four Seasons Hotel in Las Vegas in 1999, followed by Washington, D.C. in 2003 and Reno in 2007. Palmer owns 10 other eateries that aren’t steakhouses nationwide. 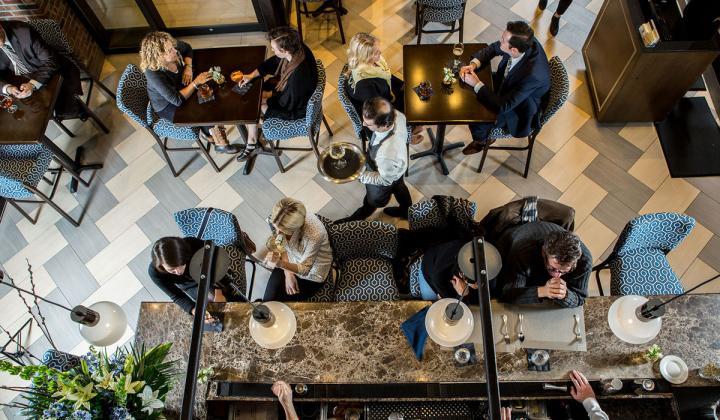 Charlie Palmer emphasizes that 70 percent of its clientele gravitate to ordering steaks.

Four of his five steakhouses, excluding the one in Washington, D.C., are incorporated into hotels. As a restaurateur, he “partners with a hotel for their guest experience. Someone who comes to stay in a hotel; food and beverage are a big part of their stay,” he says. Moreover, he markets the eatery in partnership with the hotel.

Having 180 rooms at the Archer Hotel in New York, for example, heightens the chances that hotel guests will stop to dine at Palmer’s steakhouse. In fact, around 30 percent of its business derives from hotel guests.

But all the deals are different. In Las Vegas, he leases his restaurant from the Four Seasons Hotel. In New York, he partners with the Archer Hotel and “shares a profit based on performance.”

Charlie Palmer, who is 58-years-old, was raised in Smyrna, New York, and now resides in Greenwich Village. He established his reputation as executive chef at the River Café in 1983 but left to open the well-respected Aureole in 1988, which is still thriving after a move to West 42nd Street.

Unlike chefs Anthony Bourdain and Bobby Flay, he doesn’t crave TV notoriety. He told The New York Times, “I don’t really care to do TV.” Nor does he pay much attention to social media, a rarity for chefs these days.

"It’s not a He-Man atmosphere with smoky walls, but a very contemporary feeling with great sound." — Charlie Palmer

Charlie Palmer Steak in New York accommodates 90 patrons and is open for breakfast, lunch and dinner and also includes a rooftop bar, Spyglass, with breathtaking views of the nearby Empire State Building.

Breakfast is also offered at the Napa steakhouse. Steak and eggs, naturally, is a popular item, and it offers a weekend brunch and all-inclusive brunch for $38.

Dinner checks go for an average of $85 a person in Washington, D.C., $90 in New York, and $110 in Las Vegas. Palmer said breakfasts generate about 20 percent of revenue, lunch 30 percent and dinner 50 percent, at the eateries that serve all three meals.

He described its target audience as “very broad.  We have the luxury of the hotel guest.” In New York, he said many repeat customers stem from banking, financial services and law.

After Charlie Palmer opens his fifth steakhouse in Napa this summer, are more on the way?  “We’re not under any pressure to grow. We can look for unique opportunities and partnerships, as we did in downtown Napa.  But you never know.”