Imagine having to take a ferry from an island to the mainland whenever your restaurant requires basic ingredients and kitchen supplies. One other caveat: You only get one day a week to do this.

Located on the remote Cumberland Island off the coast of Georgia, some describe Greyfield Inn as a smaller, coastal version of the James Beard Award–winning Blackberry Farm, which is hidden in the Tennessee Smoky Mountains. The island locale, which comes complete with unparalleled access to fresh seafood and its own 1.5-acre culinary garden, has some positive attributes that guide the menu each day. However, because of the inn’s secluded location, chef and culinary director Whitney Otawka has an even bigger reason to rely on what’s directly accessible.

“The island is only 17 miles long with a national seashore that’s protected and maybe 50 residents,” she says. “There are no stores and no paved roads, so when you get here you either camp out or stay with us.”

Cumberland Island’s exclusive history includes many of America’s legacy families, like the Rockefellers, Carnegies, and Candlers, the founders of Coca-Cola. Today, Chef Otawka has served some of their descendants, as well as many other visitors looking for a secluded escape augmented by culinary delights. 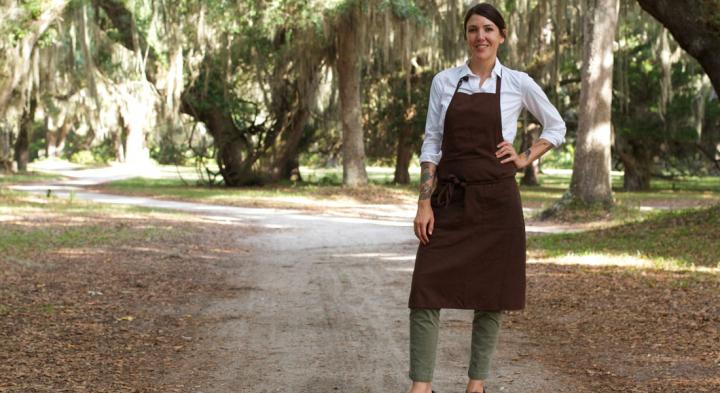 As culinary director, Whitney Otawka has her hands in all aspects of Greyfield Inn’s dining experience.

Surrounded by Spanish moss draping from big, beautiful trees, the island resort celebrates local harvests like cherries in the summer, wild turkey in the fall, and the “best Georgia shrimp” in the spring, Chef Otawka says. Most of Greyfield Inn’s produce comes from the on-site garden, but she also gets regular deliveries from local purveyors supplying organic produce, humanely raised chickens, and heritage hogs. For other supplies, she sometimes travels to nearby Amelia Island.

As culinary director, Otawka has her hands in all aspects of Greyfield Inn’s dining experience—from harvesting to preparing foods to plating. The dining service includes breakfast, hors d’oeuvres, and a three-course dinner—all served daily, along with picnic lunches meant to inspire guests to hop on a bike with their boxed fare and explore the beauty of the island.

Each day, Chef Otawka assesses what’s available from the resort’s 2-acre organic-style garden. In spring, she collects sweet peas, tender greens, and petite root vegetables, along with honey from the garden’s 20-plus beehives. In the summer, Otawka pickles cucumbers, preserves peaches from the orchard, and dries peppers for spice blends. During the winter months, guests are treated to just-picked citrus from Greyfield’s trees and Cumberland Island oysters.

It takes a disciplined, organized, and creative chef to be this resourceful, and to navigate the extremely limited transportation and distribution options—all while producing a menu that changes daily. Otawka’s personality fits that mold perfectly, and even she admits that she’s a bit of a neat freak in the kitchen. She credits this to having trained under another meticulous chef, Eric LeRoy, who was her first mentor. Chef LeRoy made everything from scratch, kept a clean and organized kitchen, and loved engaging in lengthy discussions about French wine, food, and cider. She worked at LeRoy’s creperie restaurant while completing her undergraduate degree at the University of California, Berkeley. 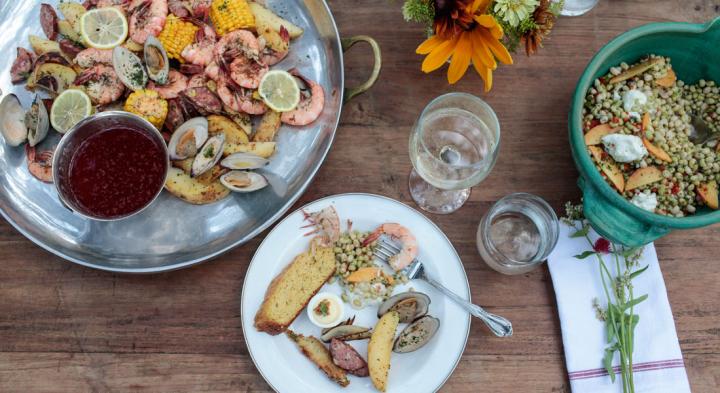 “I worked seven days a week, and that should have been a warning about my lifestyle to come; but instead, it opened up the world of food to me and gave me a foundation and passion for food,” Otawka says. That, combined with the beautifully grown, seasonal food served by Alice Waters at the nearby Chez Panisse, simply secured the deal.

After brief stints working in restaurants in San Francisco and San Diego, she moved to the South after finishing school and was immediately drawn to the history and specific culinary cuisine of the region, perhaps in part due to her background studying historic preservation. In 2005, Otawka moved to Athens, Georgia, where she walked into 5&10, Hugh Acheson’s acclaimed restaurant, and asked to be a prep cook. Impressing Chef Acheson with her tenacity, Whitney got the job and quickly worked her way up to sous chef. “I was lucky to be around such talent so early in my career,” Otawka says. “It was a great introduction to Southern cooking, which was all new to me, and it was the beginning of my career working with farmers.”

During her tenure, she worked simultaneously as chef de partie of Linton Hopkins’ Restaurant Eugene in Atlanta and attended culinary school at Le Cordon Bleu in Atlanta. She also staged in some of New York’s finest restaurants, including Per Se, Le Bernardin, and Blue Hill at Stone Barns.

In 2010, the opportunity to serve as executive chef at the prestigious Greyfield Inn came about—after she had proactively introduced herself in a letter to the owners.

“I was ready for my own kitchen and wanted to do something in a place that hadn’t yet established a strong culinary identity,” she says.

That experience was short-lived, however, as she went back to Athens in 2012 to serve as the executive chef at Farm 255, and also was executive chef at Acheson’s newly opened restaurant Cinco y Diez, in the former 5&10 space. During that time, she had the opportunity to compete in season nine of Bravo TV!’s “Top Chef,” where she felt she was able to prove herself as a seasoned cook. “Top Chef opened a lot of doors for me and was like a badge of honor,” she says. “I also developed a strong network of relationships with other chefs and like-minded individuals.”

Still, after the hustle and bustle of the show and the swift closing of Cinco y Diez—which felt so out of her control—she yearned for a return to Greyfield where she could re-establish her independence. When she returned in 2015, the move was almost romantic, as she came with her husband, Ben Wheatley, a former chef at Blackberry Farm and the chef de cuisine at Cinco y Diez. The two have worked together for almost 10 years.

“I was always guarded in the past not to create a co-chef situation, because it’s so easy to slip into the idea that the main chef is a man and I didn’t want to be overlooked in the kitchen,” she says. “But we have always worked together well: I’m a little more talkative, but he’s very business-oriented. If I have a vision, he can fine-tune it.”

While Chef Otawka helms the day-to-day operations of the kitchen, they work together on the menu. Otawka also looks over the dining area and other parts of the business.

Every day she connects with the farm manager to see what’s ready for harvest, saving the best of the loot for her elaborate dinners. At breakfast, she might serve steel-cut oats with poached pears and salted pecans. A simple roast turkey sandwich with delicate lettuces is a favorite for the picnic lunches. Dinner entrées are always inventive, like Georgia shrimp lightly marinated, grilled over oak and hickory, and served with a salad mix of heirloom tomato, pepper relish, and various greens like Appalachian cress, which is similar to watercress. In the cooler months, she’s made a simple chicken and rice soup with heirloom red rice, hakori turnips, and filet beans from the garden, or she’s used dandelion greens as the base for stewed, buttermilk-tenderized chicken and a topping of chicken leg confit.

“I don’t like to make things too finicky or too avant-garde,” Otawka says. “I like to approach food from more of a rustic simplicity, taking classic dishes and creating a more refined version of them.”

The highlight of her career came when she prepared lunch for special guest Jacques Pépin and he loved it. She made roasted chicken thighs with braised hen-of-the-woods mushrooms, green garlic, and chervil, along with crispy potatoes tossed in salsa verde and preserved lemon, and a little salad of petit greens, sorrel, ice lettuce, roasted baby beets, Mokum carrots, and green goddess dressing. For dessert, she served Meyer lemon pudding cakes with chamomile cream. “He compared my cooking to that of his mother and aunt in France,” she says. “For me, there is no greater compliment.”