Expanding a Concept with an Urban Garden

Farm-to-table is certainly one of the buzziest restaurant concepts of the last decade, but Kevin Hermann, executive chef at The Porch’s Siena location in Upper St. Clair, Pennsylvania, wasn’t content to just employ the locavore moniker. For The Porch’s two locations—the first, where Hermann began as executive chef, is located in Schenley Plaza in Pittsburgh—he’s fashioned his own methods for bringing fresh produce directly to his guests. Shall we call it rooftop-to-register? At both locations, Hermann has turned on-site gardens into far more than just a pet project. The restaurants now boast everything from beehives to strawberry patches, all within a few yards of the dining rooms.

While this kind of direct access to produce is unusual for a restaurant in Pittsburgh, Hermann’s vision for The Porch at Schenley was always to expose guests to the benefits of eating seasonally and locally. “That’s where I find the passion,” he says of farm-to-table cuisine. Hermann also cites the Mediterranean way of sourcing endemic ingredients as a touchstone. “It’s very much about what you have around you and what you can do with it, rather than, ‘Where can I buy this cool ingredient and how far does it ship from?’” he explains. “I wanted to focus on, ‘What do we have here? And how can we get the best ingredients from our area?’” 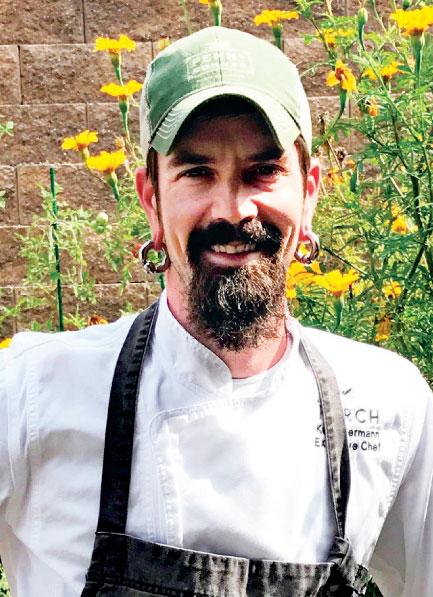 Hermann was lucky to have found a partner in Eat’n Park Hospitality Group; they tapped him as he was moving into the area and were willing to let him explore different local purveyors with which to stock the restaurant. “I always try to find [local] people that have products that I’m already using,” he says. For instance, he’s found Pittsburgh-based companies making olive oil and domestic cheeses.

“Then I can actually go to the facilities and see everything. For me as a chef, that’s important to feeling safe and comfortable,” he says. And, since the restaurant gardens cannot supply all of his needs, it was imperative to find local sources with the same high standards as his.

Hermann’s standards are a high for a reason: He’s been a follower of the farm-to-table ethos since before it was even a catchphrase. He received his professional education at the Culinary Institute of America in Hyde Park, New York, and soon after became chef de cuisine at Gigi Trattoria, one of the Hudson Valley’s foremost champions of local cuisine. “The owners had an interest in farm-to-table before it was a cool thing to do,” he says. When he moved to Pittsburgh in 2011 and landed the position with The Porch, he brought not only his classical training, but also an expansive knowledge of seasonal cooking. An on-site garden was almost inevitable.

But of course, building out a working rooftop garden isn’t as simple as throwing up a few planters. At the Schenley Plaza location, Hermann battled bugs and a lack of shade before finding plants that could withstand the heat and organic forms of pest repellent. “Certainly, those first couple of years were a lot of trial and error, and trying different plants,” he recalls. When the Siena location opened last year, Hermann had found his groove: Currently he’s growing everything from rhubarb to spring peas, and six varieties of tomatoes. And since Siena was built from the ground up, it also gave Hermann a chance to construct his ideal vision of a garden. “We wanted to maximize guest interaction with it,” he says. “That’s why we decided to put it next to the patio; it helps you feel like you’re on this different world, away from the urban life that’s around you.”

Hermann also makes sure that his servers highlight the gardens and his use of local farms when describing the menu to guests. One dish for which he’s particularly excited is his watermelon and shrimp salad, served with a creamy dill vinaigrette. The fruit, dill, and mint will all partially come from the garden, while a local supplier, Emerald Valley Artisans, will provide the feta for a salty kick. “Right now, I’m growing four different varieties of mint, so I’m excited to rotate those different flavors and textures into the salad,” he says.

Cooking seasonally is a central tenet for the restaurants, but Hermann is also cognizant that certain dishes cannot leave the menu for fear of a guest uproar. His pizzas, made to order with an artisanal-style yeast dough, are one of the most popular menu items year-round, but he changes the toppings seasonally. He’s also a big proponent of certified Angus beef: “Our steaks and burgers are some of the highest-selling items that we have,” he says. The restaurants serve prime rib every night, which Hermann notes is difficult to find elsewhere except as a weekend special.

Creating an atmosphere that makes guests excited about eating locally is obviously important to Hermann. To that end, he’s tweaked each menu to reflect the specific sensibilities of guests at each location. While Schenley’s demographic ranges from young to old, Siena’s is more family-focused. “We found the clientele [at Siena] was eating differently and seeking out different items,” he explains. “Looking for more brunch-type items during lunch, or lunch-type items during brunch.” So, while the two locations originally shared a menu, they’ve now diverged to suit each population. He’s also pared down the descriptions of dishes to make them more accessible. “If I’d stated it differently on the menu, guests might have shied away from it; not understanding what it might be,” he explains. “It’s been an education on how to describe ingredients without over-describing them.”

Of course, some foods need no explanation, like the unparalleled taste of a sun gold tomato straight from the rooftop plant. “You pop that in your mouth and nothing’s better,” Hermann says.