"Every dish has a story. It's based on our tradition or it's personal in a sense of something that I have experienced," says Dávila.

Dávila likens witchcraft to cooking: one adds things to a pot—a little bit of that, a dash of this. “If you understand all your ingredients, you know what you're doing to the person. Magic! It’s witchcraft!” she says.

Dávila, for certain, understands her ingredients. Every element on her menu—from the burrata to the raw cactus in the Ensalada de Nopales—has been studied; every dish—from the Flan de Queso to the Chips y Salsa—has a purpose.

She believes when food is stripped of its story, it risks falling into the trap that a lot of Mexican food has in America: a menu item without meaning, reinterpreted in a way that may be more palatable to the unfamiliar but also perpetuating misinformation. “Mexico is a very large country with a lot of really rich history about food,” Dávila says. Educating guests is one way she honors her culture.

Mi Tocaya is an antojería, which means it is nostalgic and offers food that guests grew up with. A mix of patterns, from tiles to murals, creates a festive vibe in the space while modern elements like industrial exposed ductwork and unassuming furniture conveys the restaurant means business. “Mexican food has been cooked by women for centuries and centuries,” Dávila says. “To me, it's all about honoring that food that has been passed down from generation to generation and sharing it.”

Dávila offers quick, intentioned, and researched explanations for each dish on her menu. “Every dish has a story. It’s based on our tradition or it's personal in a sense of something that I have experienced,” she says.

“So many people have had Mexican elotes before,” she says. “It's taking what everybody loves about a Mexican elote, but in a different platform using spaghetti squash, which—in many ways—the flavor profile reminds me of corn.”

“That was actually a taco that I made for an event to honor a mentor,” she says without skipping a beat. Specifically, she was honoring Giuseppe Tentori, with whom she worked at Boka in Chicago. “They have a great oyster program, so I did a fried oyster taco, which, honestly, I don't know if I've ever heard of that before. I just thought that it was very different,” she says. The squid ink tortillas add another element of the ocean to the dish, and the salsa Veracruzana, famous in the state of Veracruz, also plays well with the seafood. Adding a bit of herself to the traditional sauce, Dávila composes this salsa in a not-so-traditional technique. “Instead of stewing the sauce, it’s steeped in an orange vinegar that we make and a roasted garlic-chile oil. It almost reminds me more of a chimichurri, but, when you taste it, it’s undoubtedly a salsa Veracruzana.”

That gets to one of the major themes of her restaurant. “We're based off tradition, but I don’t want to do the same thing every time,” Dávila explains. To the classic or historical dishes she pays homage to on the menu, Dávila aims to put her own spin. “It's being able to add a little something of myself to a piece of history,” she says.

Dávila’s guacamole, for example, utilizes chile ash derived from a pre-Hispanic technique that involves incinerating chiles to make an ash. Historically this ash was used for sauces, but also for writing and dyes. “It’s something people probably first think is a new technique or very modern, but it's actually very, very old and part of the birth of Mexican cuisine,” Dávila says. “In Mexico, a traditional guacamole is smashed avocado, with a little bit of lime, salt, and chile—and sometimes garlic. I wanted to highlight the old way of doing it.” 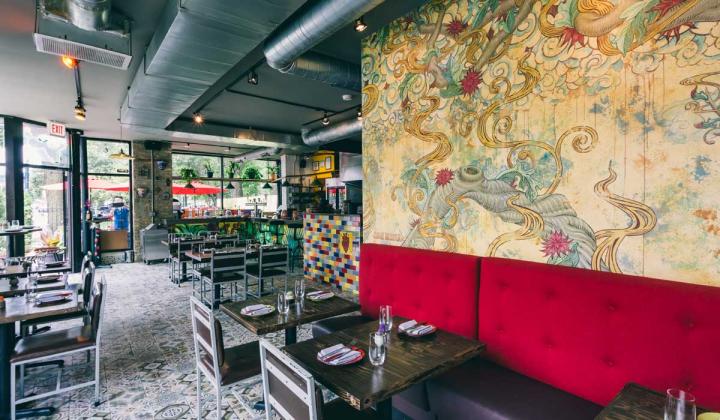 "[Servers] have to be the embodiment of every single dish," Dávila says. "If you can't convey the story, then it's not going to be good."

Dávila is a first-generation American, and her family, she says, always liked food—whether they were cooking at home or eating out. “It was always something that was a part of our lifestyle. It was in my face, and I really, really enjoyed it.”

Her parents owned a taqueria in Chicago that she describes as her daycare. Dávila enjoyed hanging out with the cooks, helping in the kitchen, and creating. “When I got older, I realized you could actually do this for a living,” she says. Then, four years ago, after working under more classical chefs, Dávila decided to dedicate her career to Mexican cuisine and open up Mi Tocaya.

“Of course, it's my favorite cuisine—I think it's one of the best—but there’s so much history and technique that is so different,” she says. “I started really diving back into what it was like in pre-Hispanic times.” She asked and subsequently discovered where ingredients came from and why certain sauces are made in different places differently ... all the while reflecting back on her own experiences and memories traveling with her family through Mexico during the summers.

When the seasons call to switch up the menu at Mi Tocaya, these food memories are where Dávila goes. “I just put myself in that mindset and pretty much—it sounds pathetic—wait to be inspired,” she says. From there, she finds direction.

Ultimately, Dávila thinks of Mi Tocaya as a storybook. She gets to relive stories from hundreds of years back. “I’m unlocking all sorts of mysteries, things that people have enjoyed with their family for time after time,” she says. 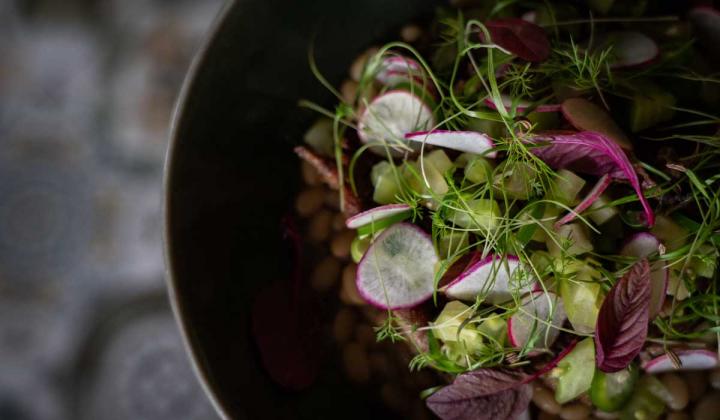 As much as she is interested in her history and the old way of doing things, however, Dávila is also forward-thinking in the messaging of her menu, as well as with the workplace environment she promotes. Instead of the traditional frijoles charros dish, or “cowboy” beans, Dávila serves Frijoles Charras Con Chivo, or goat "cowgirl" beans with root escabeche and sage crema. “Well, why not? We're feminists over here,” she says frankly.

This fits with how Dávila handles her staff, too. Between the mouth-watering pictures of tacos and margaritas on the restaurant’s Instagram, there is photo after photo of staff members cheesing for the camera or gathering over a meal. It is clear her young team of 20-somethings who are mainly Latinos, is a point of pride for Dávila. In the work that they accomplish at the restaurant, she wants her employees to feel connected to their culture and to know that success can come from embracing that culture, learning about their own history, and using that as an advantage.

The Mi Tocaya motto is everybody puts in. “Everybody contributes something,” Dávila says. “I work the line; I clean. Everybody has a respectful relationship with one another here, and everybody genuinely wants the best for everyone.”

Even though her employees all have their individual aspirations that may not involve restaurants or food—Dávila wants them to feel supported in whatever their passion is. “My thing is, say it out loud.” she says. “We become a community to help support each other.”

She says boldly: “I want everybody to be better than me in whatever they choose.”

Dávila aims to be a good mentor, yes, but whom she hires also has a direct impact on her business and how the stories from her menu are told. “A server is such an important role,” she says. “You have to have a very strong interest in what it is that we're doing and want to continue that.” Every time the menu is changed, she breaks it down for the staff, telling them the names of the dishes, the components that make them up, and the concept behind them—what it means to her, if there is a story, etc. “They have to be the embodiment of every single dish,” Dávila says. “If you can't convey the story, then it's not going to be good.”

Passion to the people

Unfortunately, in the world of Chipotle, asking others in the industry to adhere to her standard of personalization and storytelling behind the menu is impossible. “Mexican food has been bastardized so much, you know? I feel that to truly be able to capture an essence or to honor a cuisine and be creative, you have to have a foundation.”

She likens it to putting prosciutto on a menu and serving brisket instead. “That happens all the time with Mexican food,” she says.

Thus, even though Dávila loves the creative process of menu development at Mi Tocaya, she seems most passionate about the education aspect of her work. “I don't think I'll ever do another blown-out restaurant,” she says. It takes time, and she’d prefer to build at the restaurant she has. But that doesn’t mean she doesn’t have other projects up her sleeve. Dávila says she’s choosing avenues that will help her convey the value of Mexican cuisine to the greater public. What that means, she’s keeping tight-lipped about, but whatever the project entails, it will clearly be colored with history and, undoubtedly, a little piece of Dávila herself.