At Elske, chef/owners Anna and David Posey marry sweet and savory flavors with diverse textures, as in this Rye Bread Pudding with quince sorbet and puffed cereals.

Chefs Anna and David Posey fill their upscale-casual restaurant and refined modernistic menu with warmth and love.
May 2017 Amelia Levin

But don’t call it Danish.

When reports first came out about the project, Anna Posey tells me they were a little disappointed to be slightly “pigeonholed” into that category right out of the gates.

Sure, there’s some Danish inspiration throughout: In the name, which, loosely translated from Danish, suggests feelings of warmth and love. In the Danish chairs and simple, clean design that graces the space. In some of the ingredients and the style of the dishes, which hearken back to David’s heritage (his mom is Danish) as well as his frequent travels to the country. But that’s not the end to the story.

“We were going for something in between fine dining and the more low-key restaurants in Chicago,” Anna says of the concept, which falls along the same lines as many new-wave bistros in New York City, France, and other parts of Europe where high-end chefs serve refined, creative food but in toned-down, casual, and affordable settings.

“It’s the restaurant where we want to eat, and at a lower price point, but that doesn’t define the food, which is still very creative,” she says. “We want young people interested in food to be able to come and have a special dinner, but we also want more established diners who are wanting a fun night out on the town.”

The menu centers on the eight-course tasting menu for $80, with wine pairings at $45, and à la carte dishes, but nothing priced over $22. Like many fine-dining chefs-turned-restaurateurs these days, the couple also eschewed white tablecloths for bare wood tops. And, (gasp) they place the fork, spoon, and knife stacked on top of each other on the right side, instead of set in the traditional way.

“We want it to be us,” says David, and Anna chimes in: “This is something Paul Kahan taught us—you have to stay true to your ideas and not lower the bar.” 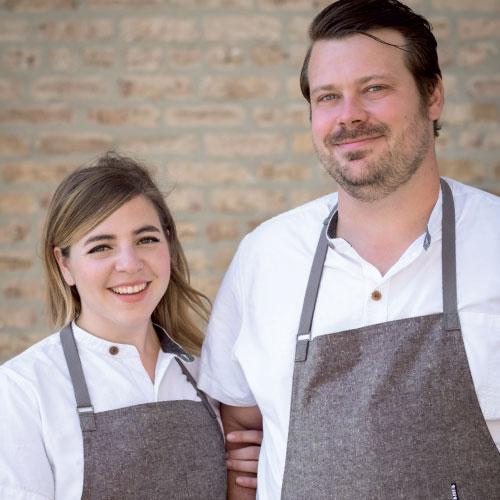 They learned much from the years spent working with acclaimed chef Paul Kahan’s One Off Hospitality—combined, they clocked more than 12 years in his group—enough to ground this, their first restaurant, in culinary expertise. In some ways, their concept represents a more modern interpretation of modernism. The Poseys have dialed down a version of molecular gastronomy to the point where it’s not that crazy scene with liquid nitrogen and agar-agar flying around everywhere, turning food into something it’s not. Still, they’re not afraid to dehydrate ingredients into powders to offer extra flavor and texture, or throw everything in the wood-hearth oven for a bit. Or even play with what we might view as basic ingredients, like sauerkraut and buckwheat, in more inventive ways that make sense on the plate.

In fact, the wood-burning hearth—a custom-made, vertical oven of sorts, stacked with racks, and room for logs on the bottom—represents the focal point of the kitchen and of their cuisine, adding a smoky, earthy flavor to everything from chicken thighs to carrots, sepia to celeriac.

Literally, the hearth represents another extension of elske, that feeling of warmth mixed with cozy Midwestern appeal. Outside, another wood-burning fireplace warms the Zenlike patio, with its wooden lounge chairs and brick walls. More seating is expected to come this summer, ensuring this will be another hot spot on the quieter side of Randolph Street, which the locals know as Chicago’s restaurant row.

And elske, of course, carries into the Poseys’ relationship. “We got married down the street, we love food, we love each other…” Anna trails off, laughing at the surface cheesiness of it all. But in all seriousness, the couple are that adorable pair you want to hang out with and invite over for a fun dinner party.

Their backgrounds couldn’t be more different: David grew up in Los Angeles, Anna outside Milwaukee. David started experimenting in the kitchen at the age of 10, while Anna found her way into food after earning an art degree from the prestigious Milwaukee Institute of Art and Design and first considering a career in urban agriculture.

David earned a degree from The Culinary Institute of America, going on to work at the acclaimed Trio under Grant Achatz, and then following him to Alinea when it opened. David ended up at Blackbird, after seeking out chef de cuisine Mike Sheerin, who was a protégé of Wylie Dufresne at WD-50, a place he always wanted to work.

The Poseys’ paths converged when Anna pursued the pastry world, enrolling at the French Pastry School in Chicago and taking an internship at Blackbird, where David was chef de cuisine at the time, having worked his way to the top from lunch prep to grill cook, over the course of nine and a half years.

As part of the internship she also split her time at Publican, Chef Kahan’s beer hall–inspired culinary playground. Anna was cutting her teeth on the hot line under a “dream team” of chefs, as David puts it. Still, pastry continued to call her name, so Anna left to gain more experience. She worked briefly at Everest, one of the city’s longest-running, traditional fine-dining restaurants, before returning to fill the open executive pastry chef job at Publican. It was during this time that the couple’s relationship blossomed, as did their dreams of opening their own place together.

Posey admits it was tough leaving One Off Hospitality after nearly a decade, but it was also time to try his own thing. The hardest part at first was finding the right space for their concept, which ultimately came through a family friend looking to sell a small building on Randolph Street. “We weren’t interested initially, because we were looking to rent, not buy, and it was not the area where we wanted to be,” Anna explains. But there were definite perks: “It was the corner spot we wanted, with a patio and room to grow a private-dining business.”

In the kitchen and in business, the Poseys continue to maintain opposite pursuits in a way that seems to help their partnership. Anna sticks to her pastry area; David mans the hearth and expo. She focuses on design and aesthetics, he on lawyers and bills. She says he’s alpha to her beta in the kitchen—though in conversation, it seems quite the opposite.

They come together, however, to collaborate on the menu daily, and they rely on each other to serve as their “No. 1 taster.”

“I’ll think of ideas and present them to Anna, and if she likes it, then it goes on the menu, and vice versa,” David says. They’ll swap ingredients and techniques, too, with Anna using David’s vegetable stock for her rolls and David using her candied, fried hazelnuts for savory dishes.

In fact, there’s a gentle balance of sweet and savory in almost all of the dishes, such as David’s slow-poached veal sweetbreads with wood-grilled Napa cabbage hearts, dehydrated and powdered sauerkraut, pickled golden raisins, and candied cabbage cooked with sugar instead of salt so it becomes super-browned and caramelized, but also very umami, reminding Anna of shredded beef.

His soft-scrambled eggs, inspired by the antithesis of how his mom cooked him eggs, pairs with those hearth-roasted chicken thighs and sweet carrots mentioned earlier. He nestles duck liver in a tart made with a semi-sweet and nutty, buckwheat crust, topping the delicacy with chicken consommé, the pickling liquid from ramps foraged near Anna’s childhood home in Wisconsin, and bright green, dehydrated parsley powder resembling “Astroturf,” as he puts it.

On the pastry side, Anna also interplays color and texture into her desserts. For example, she uses a dark-colored bowl to hold a crumbled olive oil chiffon cake that’s topped with chards of a frozen, savory-forward liquid cheesecake, jasmine tea frozen yogurt, crumbled meringue, and a light drizzling of Spanish olive oil.

For a riff on a bread pudding, she sources artisan-style Danish rye bread from local Pleasant House Bakery (she’s working on introducing her own bread sometime this year), and steeps it in cream, using the hot, infused milk to deglaze a caramel that’s then poured over the bread pieces and topped with a quenelle of quince sorbet, a drizzling of quince vinegar, and a sprinkling of puffed sorghum, brown rice, and amaranth grains. “There are definitely a lot of elements that go into our dishes, but it’s more about choosing one or two flavors and accentuating them with everything else,” says Anna. Through it all, of course, every dish is served with that noticeable elske.

Manufacturing firm of warewashing equipment that works well and is reliable.