Society 1854, which opened in August in the Omaha Marriott Downtown, features regionally inspired food and drinks and all-scratch cooking.

When the Omaha Marriott Downtown opened its doors in August in Nebraska’s largest city, acclaim followed. The city’s first new full-service hotel in more than a decade, the 12-story, 333-room hotel shattered norms with its upscale vibe, including a rooftop swimming pool, an outdoor events area, 17,000 square feet of meeting space, and, at 11,000 square feet, one of Omaha’s largest ballrooms.

But that alone wasn’t it for the hotel, which serves as the anchor of the $205 million redevelopment of the city’s Capitol District. Rather than trot out another modestly reliable, but ho-hum, hotel restaurant, Marcus Hotels & Resorts, the owner of the Omaha Marriott Downtown, invested in a more energized foodservice concept.

With a warm interior of rich wood tones and leather finishes, Society 1854 is far from the generic eatery guests of mainstream hotel chains have come to expect. And that’s precisely the point. 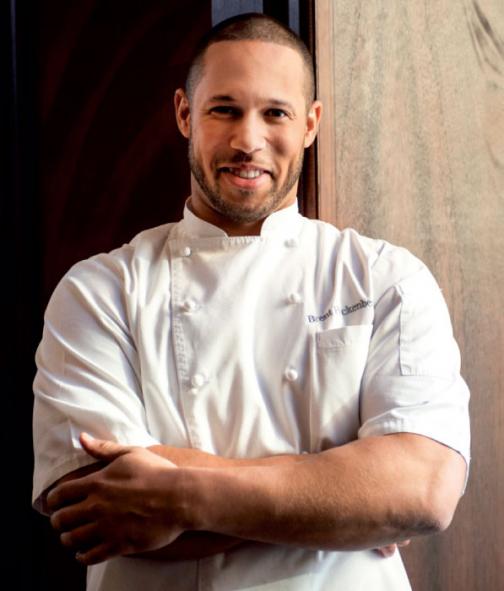 Chef Brent Hockenberry says Society 1854 in the Omaha Marriott is out to prove hotel F&B can be innovative.

“We’re trying to smash the idea that you can’t get an innovative meal in your hotel,” Chef Hockenberry says.

While luxury and boutique brands have long invested in compelling full-service restaurants, the nation’s everyday, established hotel chains have largely prized the accessible, convenient, and familiar—a practice that has resulted in a watered-down product, says Omni Hotels and Resorts executive vice president of operations Stephen Rosenstock.

“Guests ventured out of the hotel because these restaurants didn’t have enough energy, enough spark,” he says.

But those days are fading as conventional hotel chains integrate compelling dining options into the fold, propelling the full-service hotel restaurant’s evolution from afterthought into a necessary piece of the property’s puzzle in the competion for a more discerning consumer.

“Our travelers today are elevated, and they have broader options because the world is more accessible,” says Dana Pellicano, vice president of F&B Experience, The Americas, for Marriott International.

Guests, Pellicano continues, are pursuing food and beverage experiences, valuable social currency in the contemporary, social media–fueled world. A more diverse and ambitious group, today’s hotel guests—driven by millennials, but certainly embraced by other generations as well—want authenticity, seasonality, and uniqueness, a reality that has forced hotel chains to respond.

“You either cede the battle or build it at home,” Pellicano says. For Marriott and its sister concepts, that’s prompted a range of new full-service restaurants designed to energize and spur traffic.

At the Marriott in Bridgewater, New Jersey, Booker & Zinc stands out from the bevy of chain restaurants outside its doors with a spirited menu of creative, regionally inspired entrées such as Seared Diver Sea Scallops and Wood Fired Chicken from local Griggstown Farm, as well as bourbon flights and craft beer from New Jersey breweries such as Flying Fish and Kane.

Heralded as one of Calgary’s best new restaurants, One18 Empire at the Calgary Marriott Downtown Hotel in Canada boasts craft cocktails with house-made bitters and a tasting room for Scotch and bourbon, while the Marriott in Irvine, California, hosts an intimate, 18-seat speak-easy called YNK (You Never Know) serving up a revolving menu of handcrafted, globally inspired cocktails.

At the Renaissance Chicago Downtown Hotel, an underutilized rooftop space was transformed into Raised, a posh concept that pairs skyline views with Instagram-worthy cocktails and imaginative dishes such as Seared Duck, Steamed Mussels, and Crispy Potato Taquitos.

“People want the unexpected, to be surprised and delighted, and we’re showing people that we can build experiences that rival free-standing spaces,” Pellicano says.

Omni Hotels in locales across the U.S. have similarly upped their foodservice game. Consider the recently opened Omni Frisco near Dallas, where the hotel chain teamed with chef/owner Nick Badovinus to bring his heralded Neighborhood Services concept onto the property, or the yet-to-open Omni in Louisville, Kentucky, which will feature a Neighborhood Services, a Bob’s Steak & Chop House, and an upscale speak-easy with four bowling lanes.

“We want to be competitive with the free-standing restaurants,” Rosenstock says, noting that Omni markets many of its restaurants independently of the hotel and has provided its Bob’s and Neighborhood Services eateries their own street entrance to heighten the stand-alone feel.

“Having a better dining experience and better food than our competitors provides a point of differentiation that helps us stand out not only from other hotel brands, but also other restaurants competing for our guests’ business,” says Eric Lent, vice president of full-service hotels and food and beverage solutions for the InterContinental Hotels Group (ihg), Holiday Inn’s parent company.

And don’t expect the momentum to slow. Many hotel insiders predict an increasing array of innovative dining options at mainstream hotel properties.

“This will absolutely continue,” Omni’s Rosenstock says. “The Hyatts, Hiltons, and Marriotts of the world see these dining trends just as we do and are embracing them at their properties as well.”

To wit, Pellicano says Marriott will continue to monitor the marketplace and create full-service restaurant concepts that resonate with its hotel guests and entice visits.

“We’re going to keep pace with change and innovate rapidly with a high degree of fidelity so that our customers are dining at our hotels and not heading outside our doors,” she says.