Not every hot Southern concept is in Charleston. Chef Russell Jones returns to Columbia and opens a South Carolina winner.
November 2017 Amelia Levin

When the opportunity opened up for Russell Jones to return to his hometown of Columbia, South Carolina, he jumped at the chance to explore a new culinary path and establish some permanent roots.

Some chefs might be surprised at his choice to bypass food haven Charleston for a less-established, more up-and-coming food town such as Columbia. But the decision was easy, what with wife, Monica, and newborn, Henry, to consider, plus the high costs of living in D.C., where he most recently worked. A move to the South also meant being closer to extended family, living in a bigger house, and the chance to bring a burgeoning food town into a new, modern age without a lot of competition. 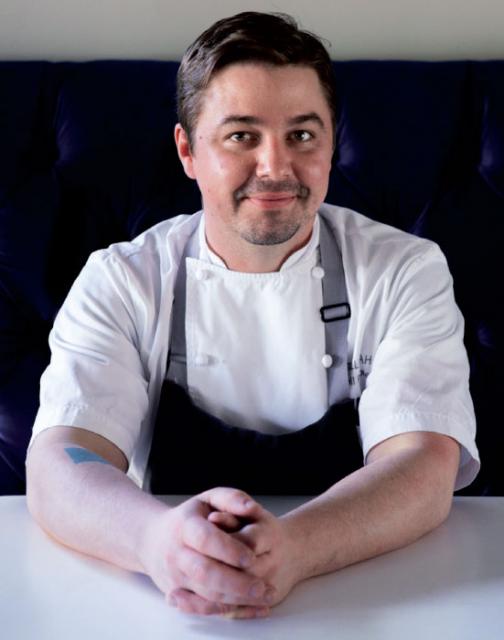 “I was born and raised here, and it’s much different now,” Jones says. “Many chefs who once moved away are wanting to come back. But we’re still a much smaller food town compared to Charleston and Greenville, [South Carolina].”

Since opening in January, his restaurant, Tallulah, has earned numerous accolades and strong reviews on the local, regional, and even national levels. But the success didn’t come without its challenges.

Bent on introducing his local clientele to a more creative and modern approach to eating and dining, Chef Jones was met with some criticism from traditionalists who prefer the classic appetizer-entrée-dessert format. No sharing allowed.

As such, the first stab at a modern menu focused on small- to mid-sized plates showcasing different regions of the state (low-country, Piedmont, Appalachia) and categorized dishes by meats, seafood, and vegetables. That menu had to be revised, and Jones has since switched to a more standard, three-course menu, but he’s found a growing group of younger, more adventurous diners in the area who still come to share different plates and socialize over creative, artfully plated food that showcases produce, meats, and other goodies from farms just miles away.

“It’s a combination of trying to attract the people who are keeping up with modern trends, but at the same time, not alienating your more traditional clientele,” Jones says. He also credits his team for the early successes, giving thanks to the local talent he’s pulled in, which includes head baker and pastry chef Charley Scruggs, formerly of The Oak Table and Rise Bakeshop, and chef de cuisine Blake Faries, formerly of Saluda’s and Sea & Salt.

The area has other attributes as well. Surrounded by a landscape of rolling hills and endless farmland, Columbia also has a local university and graduate schools, institutions that attract more outsiders to the area, which, Jones says, otherwise doesn’t see the volume of tourists found in Charleston. For Jones, the academic culture helps produce a revolving “foodie” crowd, and the farmland yields access to plentiful seasonal and local products.

Tallulah has gained favor with some of the more mature, traditional patrons who once flocked to the same space, which previously housed Dianne’s on Devine, a longstanding, popular restaurant and true landmark in the capital city. In some ways, that history was a bit of a hindrance to Jones, who sought to differentiate himself from the past. But in other ways it became a draw, with a sense of intrigue as to who would be taking over. “The real dining scene in Columbia has shifted to another part of town, so we’re trying to attract more people back to this area, which is more residential,” Jones says.

Dishes like pan-fried, whole head-on snapper and its “pow pow” sauce, which uses locally foraged pawpaw fruit with a chili and shrimp paste, have helped keep all types of diners coming back for more. Crab cakes made with North Carolina jumbo lump crab is served with succotash and corn purée, while a Rohan duck breast might see a cabbage pancake and house-made kimchi as a side.

And then there are Jones’ signature vegetable dishes that use seasonal ingredients prepared as simply as possible. Grilled and blistered shishito peppers from nearby urban farm City Roots come with a bright and fresh cucumber-celery relish. Or there may be a banana pepper rouille and smoked potatoes to help garnish a pork chop. Brussels sprouts are flash-fried and slightly pan-charred with plenty of garlic, chilies, fresh lemon juice, thyme, and parsley and topped with a drizzling of house-made tahini, fried garlic, and benne seeds—a lighter version than the classic bacon- or butter-infused one.

Jones has also sourced eggplant from City Roots for a basil-infused caponata topping on his house-made, ricotta-stuffed agnolotti. In the summertime, local tomatoes are blended into an easy gazpacho with lemon oil and a microgreen garnish. In autumn, beets pair with preserved lemon, black cider vinaigrette, pumpkin seeds, and more of that house-made ricotta for a light, yet filling, salad.

It’s common to see a menu change at Tallulah as often as two or three times in one week. “Especially with vegetables, I try to make food I like to eat at home,” he says. “One of the chefs I worked for in D.C. taught me to try to get the best products I can and not screw them up, and just let them speak for themselves.”

Given Tallulah’s close proximity to farms in Columbia, this has proved to be a much easier task than in D.C.—giving him even more reason to move back home.