Grasshopper Tacos from the Black Ant.

Adding a flavor unlike anything else—believe it or not!—these sustainable ingredients are trending on menus.
October 2018 Juliet Izon

There’s a reason the guacamole is on nearly every table at The Black Ant in New York City: it’s exquisite. Perfectly chunky and studded with pomegranate arils and slices of green apple, it is both a traditional and modern execution of a favorite Mexican dish. Most intriguing however, is the sharp citrusy flavor that cuts through the creaminess of the avocado. That’s not lime guests are tasting, though; it’s ants.

A popular source of protein throughout nearly every continent, insects have not quite made the leap onto American tables. Part of the problem may be that diners here are not as comfortable with whole animal presentations, preferring instead the removed distance of a boneless, skinless piece of meat. And with many Americans primarily familiar with European cooking techniques, bugs have been seen as more of a nuisance than a food source. But times are changing. 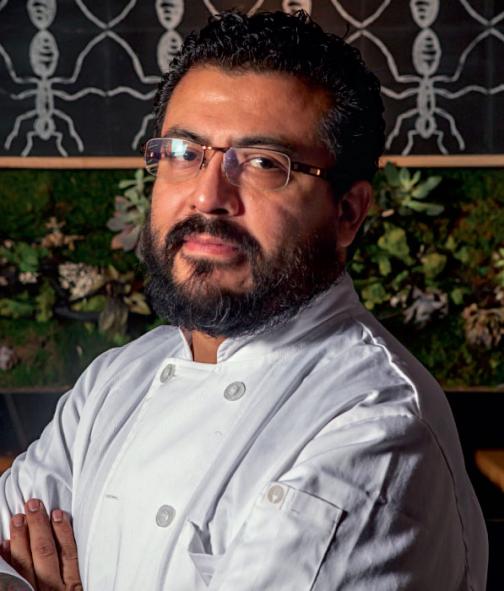 And Mario Hernandez, chef and partner of The Black Ant, is a key player in shifting the paradigm by showcasing insects—from grasshoppers to beetles—in approachable, yet imaginative dishes.

More American chefs are realizing that cooking with insects is cost-effective and eco-friendly compared with other forms of animal protein. “It’s really sustainable,” Hernandez says. “You can have a kilo of chapulines and you don’t need 50 liters of water. It makes a big difference.” Insects have a tiny carbon footprint compared with cattle, for example, and cooking with them produces far less waste since the entire animal is eaten. They’re also nutrient-dense, rich in calcium, iron, and vitamin A. As rising global populations and climate change make finding alternative food sources hugely important, many will look to chefs like Hernandez to learn how to cook insects efficiently and deliciously.

Of course, for Hernandez, a native of Cuernavaca in Morelos, Mexico, eating insects is about as avant-garde as corn, which is to say, not at all. “If you go to Oaxaca, you can find them on every single corner in the markets,” Hernandez says. “I think it’s really important to show people that Mexican cuisine is more than tacos and enchiladas.” The chef is well-positioned to present what he terms “nueva Mexican” cuisine; he studied under Douglas Rodriguez at the New York Times’ three-starred Patria and worked at buzzy La Esquina as its executive chef before opening The Black Ant in 2014.

The chef is well aware, however, that even in the trendy neighborhood of the East Village, most diners will have their first encounter with entomophagy (the technical term for eating bugs) under his supervision. That’s why he often recommends novices try the guacamole first: the ants here are finely ground and mixed with salt, rather than served whole. “They add a sour and spicy taste to salsas and salads,” Hernandez says.

More adventurous eaters can then move onto the shrimp tacos, which have been breaded not with a wheat or corn-based flour, but ground grasshoppers. Known as chapulines in Spanish, these herbivorous insects have long been a part of traditional Mexican cuisine. In Hernandez’s shrimp dish, they add a delightful crunchy coating to the crustaceans, which are then wrapped up with avocado and apple slaw in a warm tortilla. Like the guacamole, the insects featured in these tacos impart a subtle flavor; they are a complement to the shrimp as opposed to the star.

There are, of course, a few dishes on the menu where that is not the case. One of the most popular is Hernandez’s grasshopper tacos, where the insects are left entirely whole and presented much the way they would look if you happened to encounter them in the wild. The taste of them, at first, is actually akin to popcorn: they are crunchy, salty, and light on the tongue. But there is an earthy, rich undertone that lends a distinctive flavor to any dish of which the critters are a part. For his tacos, Hernandez pairs grasshoppers with spicy chopped shishito peppers, creamy queso fresco, and a smear of bright green avocado purée. With its bold presentation and unique components, it’s little wonder that diners nearly always whip out their cameras when this dish hits the table. The combination of the crunchy grasshoppers with the bite of the pepper and the mild soft cheese is about as perfect a taco as one could imagine.

Die-hard foodies may also be surprised to find cocopaches here. While plentiful in Mexico, diners are still hard-pressed to locate them in the U.S. And at Black Ant, there’s no mistaking these large beetles for simply a garnish on the dish, either: The menu lists the appetizer as simply, “Cocopaches.” Hernandez serves them scattered over top of a savory corn panna cotta, along with epazote flowers, carrots, toasted quinoa salad, and red pepper curd. “It’s really good,” Hernandez says.

Even the desserts are infused with the flavor of insects. The banana cake, which is topped with a yogurt spread and nixtamalized parsnip, is also served with a grasshopper ice cream. “In the ice cream, they’re seasoned with chilies and some spices, imparting a spicy, sour taste,” Hernandez says.

While Hernandez is pleased with his insect-forward menu, there are still many others he’d love to introduce to New Yorkers. “I want to try escamoles, which are the ant eggs,” he says. “[But] they’re really difficult to get.” At the chef’s upcoming restaurant, however, sourcing may not be as large a hurdle. Hernandez and team plan to open in Mexico City sometime next year, bringing their modern cuisine back to its birthplace.