The Jamón De La Bellota Globe is jamón sliced paper-thin and wrapped around a Himalayan pink salt globe with a Manteca candle center. It’s like a pork fat candle, so guests have warm fat that they can drizzle onto toast.

The Tapas Bar and Dining Room complement one another. We want to be the only place in New York where these cuisines are done the right way—no fusion whatsoever—just kickass Spanish and very modern Italian.
June 2017 Anthony Sasso

A 13-year veteran of Casa Mono, Chef Anthony Sasso talks about making the leap from a classic neighborhood restaurant to “the largest space B&B has ever lived in.”

That’s B&B Hospitality Group, as in Joe Bastianich and Mario Batali. La Sirena, on the plaza level of the Maritime Hotel in Chelsea, offers two dining experiences: the Tapas Bar, with small plates to pair with wine and cocktails, and the formal Main Dining Room, with contemporary Italian. 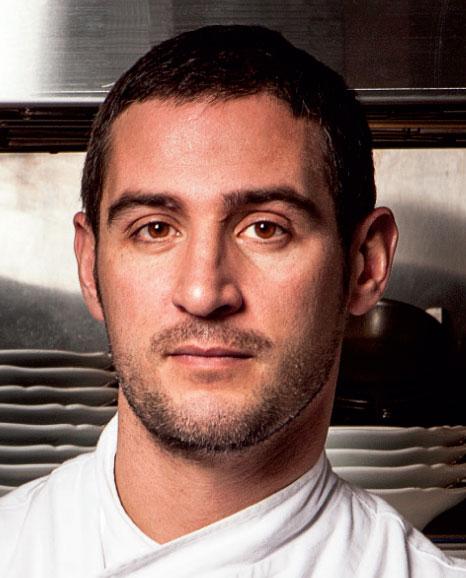 Essential Item:  A travel journal, for notes on restaurant menus.

Annual Sabbatical:  Late August to mid-September, before the crazy holiday rush sets in.

Dream Destination:  Japan—because of its farming and produce.

What Drives a Chef: The farmers market—veggies and fruit. There are only four or five four-legged animals that we all eat.

I’d just come back from an extended trip to Spain (extended because my driver’s license expired so I was stranded in Barcelona for an extra couple of weeks), and Chef Batali approached me about doing Tapas Bar, all Spanish, inside La Sirena, all Italian. He told me I could sleep on it, but then called me at 8 o’clock that night and said, “So dude, what’s your answer?”

I started here January 6 and had to figure out how the Spanish and Italian menus would complement one another, but stay totally separate. We share some of the ingredients, but none of the dishes overlap. The challenge was for the staff to learn all the different dishes. We gave the staff a script and the bible for Spanish food: Every dish had a story, and dishes are built from scratch for a reason.

As for ingredients that overlap: In the bar we have these beautiful head-on shrimp that are caught in Barcelona and are really catching on in New York. At the bar I’m serving Gambas a la Sal, with a simple olive oil mousse and a reduction of shrimp stock made from the shrimp shells. The presentation is just a shrimp laid on its side, in a bowl with this mousse and house-made shrimp bitters, to recall the whole cocktail theme at the bar. It’s served in the Main Dining Room as Garlic Shrimp. It’s the same head-on shrimp but instead of grilled it’s heated up in some highly infused garlic oil, with a couple of local Gulf shrimp, clementines, chives, and aji amarillo (hot yellow chile peppers).

The bestselling dish in the Tapas Bar is a chickpea purée that’s turned a little bit green with basil and avocado, served with torn pieces of olive oil–toasted bread, preserved lemon, and the best olives—all translated from my experience in Spain last fall.