Hwy 55 prides itself in elevating the experiences of guests in and out of the restaurant, whether it’s holding an umbrella or refilling a drink for a worker outside.

One act of kindness that is making waves across the restaurant industry began at a restaurant in Huntington, West Virginia.
January 2019 Rachel Taylor

One person's decision to improve another person's life, no matter how small, can have a ripple effect they never saw coming. One act of kindness that is making waves across the restaurant industry began at a Hwy 55 restaurant in Huntington, West Virginia.

Erin Downard is the owner and operator of the location, one of 140 in the growing burger-and-shake concept’s footprint. She has a lot on her plate running the restaurant, but isn’t too busy to ignore the needs of her employees and customers. “Love Your Neighbor” is a motto the company operates by and Hwy 55 prides itself in elevating the experiences of guests in and out of the restaurant. Whether it’s holding an umbrella for a guest as they walk to the car or refilling a drink for someone who’s “out working on the electrical lines in the 98 degree, 2,000 percent humidity of eastern North Carolina, refill his cup not because you want a tip, but because he’s thirsty,” Hwy 55 founder Kenney Moore says.

“It’s evolved now where we’re trying to make sure that we teach young people that when you come to work with us that you know to leave all your issues in your car when you come in here,” Moore says. “You’re in here to serve others and it’s wrapped up in agape love, which is, you know, extending yourself for others regardless of how it feels.”

“We talk a lot about ‘Love Your Neighbor’ and things we can do and how do you make a customer’s service better,” Downard says. “The foods great and people will come for food, but people come for the experience. You want to go where people know who you are and where you feel comfortable and where you can have a good time.”

Through Facebook Workplace, Hwy 55 employees across the country share “Love Your Neighbor” moments to show the good things that are happening at each location. One of Downard’s recent postings generated a huge response and even caught the attention of Moore.

Since the Huntington location opened two years ago, one of the guests who frequently dines at the restaurant, about twice a week, is Lisa Blankenship. Along with her husband, Lisa likes exploring the menu and usually orders a burger or her favorite—a banana split. However, the ordering process takes a little longer than other customers because she is blind. 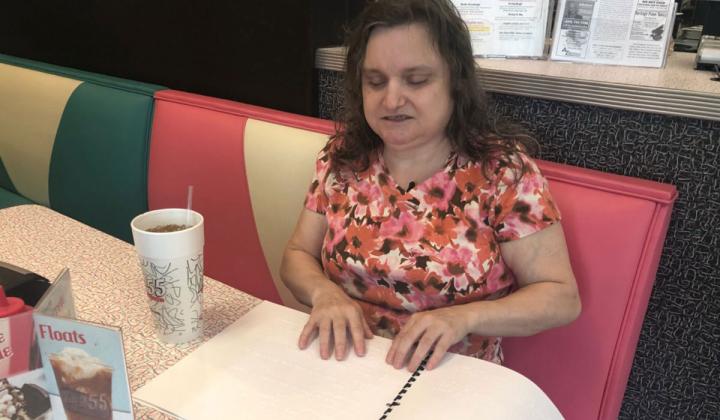 “She wanted every detail of it, so it could take her a minute for Lisa and her husband to be able to order,” Downard says. “We’re like, ‘Hey Lisa I think you should try this or try that.’ Every time they come in they get banana splits so you start to get that conversation going and she’s just like ‘I love them they’re amazing that’s my favorite part.’ Sometimes the only thing they came in for was a banana split, but she liked to explore the menu and see what else she could try. It’s not that ‘well they’ve got a burger,’ well everybody in town has a burger, you know, so what makes it different or special.”

To make sure she isn’t missing out on anything on the menu Lisa’s husband reads her the entire menu—“it was a word-by-word, line-by-line, every time they came in,” she says. Downard emphasizes Lisa’s husband didn’t skim over the menu or just give her different categories from the menu, he described each dish in detail making sure to list specific ingredients as well.

“If you’re talking to your guests you find out things you didn’t know. It was obvious when Lisa first started coming in that she was blind, but through conversations that the wait staff was having with her—you know I would always say hello but you’re running around as the operator and doing different things,” she says. “But the wait staff is who really started talking to her and what is her experience.”

Through those conversations the servers found out that as a child, Blankenship attended a school for the blind and learned how to read braille. Downard, who is a former TV broadcaster and producer, used her connections from her previous career to help improve Blankenship’s dining experience.

Working with the local Cabell Wayne Association of the Blind, Downard transformed the regular Hwy 55 menu into a braille menu for Blankenship.

“We knew she could read the braille so once you learn that element it was like that’s a really easy phone call,” she says. “She’s one of their clients that they try to assist with lots of different things being blind and they’re like ‘oh yeah we’ll get Lisa a menu, no problem at all.’ They just took a menu found a digital online version so they could just copy and paste it and translate it.”

In September, Downard and the staff of the Huntington restaurant surprised Blankenship with the new braille design. She was so excited she immediately started moving her fingers across the embossed pages.

“She was so surprised she was almost giddy and she actually asked to keep the menu because she made her order and then was like ‘I just want to hold on to it.’ I mean her fingers just go nuts across the page as she’s going through it saying oh I didn’t know this sandwich had this or that,” Downard says. “She found a typo in the first one, which was hilarious like ‘oh my gosh, she really does read it.’”

Blankenship’s special menu has its own shelf in Downard small office—“We don’t have offices I have a tiny little cubby,” she says. Sheltered from dirt and liquid, the menu is always there when Blankenship needs it.

“You see her coming through the door and somebody go get Lisa’s menu and we’ve got it ready,” Downard says. “It’s nice and hopefully the outreach gets to other folks that they can come to a restaurant and be—she just wanted to be normal, she just wanted to be like everyone else. Now she can be.”

After Downard shared Blankenship’s story on the company’s workplace network, Moore knew it was an initiative that should be implemented throughout all of the Hwy 55 locations.

“When we saw it, what was kind of neat, was seeing the other people that chimed in underneath it saying ‘What? I’d love to have one of those,’ that’s really neat even before the publicity ramped up. So, of course, we applauded Erin and her team for doing that,” Moore says. “It was just another way to just kind of extend yourself for somebody who’s a little less fortunate than you. So, you know, that fits right in because it shows that it wasn’t a slick professional ‘hey look at us aren’t we great’ kind of thing it was a ‘doing what’s right for a fellow human being’ and that’s why we did it.”

“We like to share our ‘Love Your Neighbor’ stories, so we got a nice picture with Lisa the day she came in with the braille menu and we posted it with a couple of the wait staff and said, ‘Hey this is what we did,” Downard says. “This is how its helped one client.’ Kenney actually saw it and he was like ‘I love this idea we’ve got to figure out what to do with this’ and then he called and he’s like yeah, we’ve got to figure how to do it for every store, like every store needs one of these menus because this is something different. If it made an impact on her where else can it make an impact?” 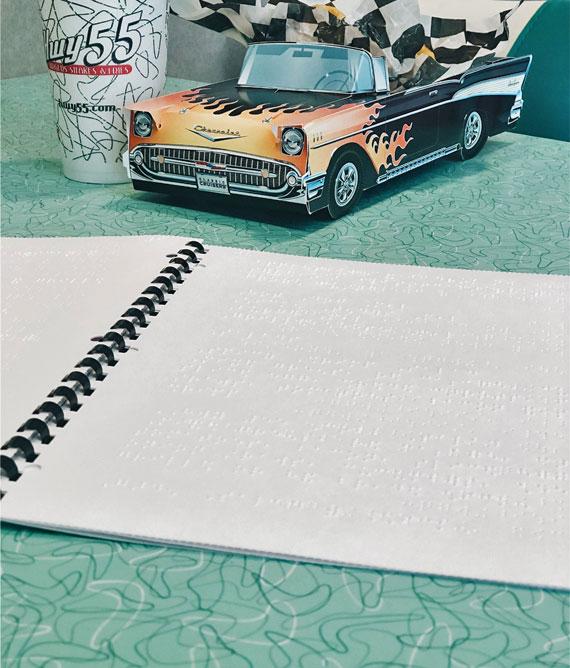 Downard says the team Moore put together to help execute a plan to get a braille menu in every location reached out to her. Not knowing if they would be able to fill a national order, she contacted the Cabell Wayne Association to see if they could help.

“We’re very hands-on and that’s kind of the fun part about being a local small business restaurant is I get to do some of this stuff,” Downard says. “I want to know what it [the menus] looks like so they held some for us and explained the process. They showed me how they highlighted and switch it to the braille and actually emboss the menus so we got to watch the process, which was pretty neat. They made 400 of them for us.”

The timeline to get the new menus into the restaurants moved quickly. Originally the association estimated it would take about four weeks to get the menus down. However, there was so much excitement about the braille menus that they sped up the process. At a recent manager’s meeting, the menus were distributed to those in attendance and shipped to other locations across the country. Now every Hwy 55 location has a braille menu on hand, Downard says.

“The cool thing is now we have one in every store,” Moore says. “That’s been kind of a neat thing that’s come out of it. We were kind of shocked at the publicity this got because it was actually kind of just what we teach and what we believe is that you extend yourself for others.”

As for Blankenship, she is thrilled with the reach and attention the braille menus have received over the past few months. Downard is also content with how large and far-reaching the one act of kindness has grown from her restaurant. “Lisa made that difference. We didn’t, she did that by her telling her story was how we learned and really kind of changed our whole company with what we’re going to do and how it’s going to be able to help people everywhere,” Downard says.

She adds, “It’s funny to talk to Lisa and be like you did this, you made this change, and she’s like, ‘this is just so exciting think about all of the people who maybe didn’t know before but now can read the menu.’ It’s just that extra tiny touch and to see how happy that made her and it was so easy for us.”

This little piece of good news also highlights the brighter, happier things happening in an area where good news is rare these days. The news of the braille menu spread throughout the town and the president of the Chamber of Commerce recognized the restaurant.

Downard adds, “So people here have heard what the store has done so that’s nice. People appreciate it and makes them more loyal.”

Outside of West Virginia, people are also hearing about the braille menu and how one small change can make a big impact. Downard mentions a friend in Washington D.C. who called her about the news after hearing it on a morning radio show.

“The exposure that Huntington has gotten has been amazing too. There’s great news coming out of Huntington. But it was just nice you know it is good news that’s traveling from a community that doesn’t always get a lot of good news,” Downard says. “We are in the heart of heroin country and we made an Oscar nomination last year for the “Heroin(e)” documentary that Netflix did, so you know good news is a big commodity around here.”