BJ's opened its 206th location during the third quarter.

BJ's Gets More Efficient on Road to 425 Restaurants

The polished casual chain is beating the competition by investing in operations and new locations.
July 2019 Rachel Taylor

Pushing through wage increases and rising operating costs, BJ’s Restaurants finished the second quarter with positive results yet again. The quarter began softly for the polished casual chain—executives attributed the slow start to bad weather in different markets and avocado inflation. However, menu promotions and an initiative to upgrade kitchens across the system paid off in the end. Same-store sales remained consistent with last quarter’s results, increasing 2 percent during Q2 2019, announced July 26.

BJ’s rolled out a variety of new dishes—tri-tip sirloin entrees, combination plates, along with the Philly cheesesteak sandwich and Tri-Tip Sliders—over the last quarter, which have played well with customers and contributed to higher check.

The introduction of the Tri-Tip dishes and related promotions didn’t have the same impact on check growth to start the year as it did during Q2, Trojan said during the company’s quarterly review. The Tri Tip entrees now represent one of the most popular categories on the menu. Trojan believes the company found a balance when it comes to promotions, which has contributed to guests spending more, and it will continue to move away from strictly discounting items. Now the goal is to drive more traffic to restaurants after experiencing only 0.7 percent growth during Q1 followed by a 1 percent decrease in Q2. 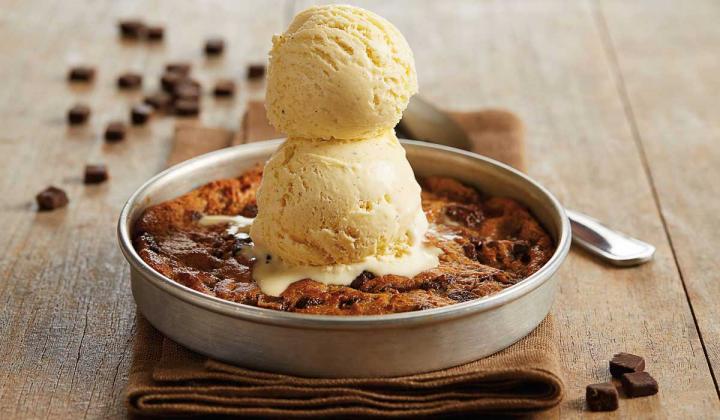 BJ's Restaurant & Brewhouse
The Pizookie is a part of the Brewhouse Specials lineup and is only $3 on Tuesdays.

“In order to achieve our 3 percent comp sales objective, we plan to focus on our value oriented traffic and check building menu additions, growing our off-premises sales, and continuing to drive promotion and discounting efficiency while maintaining our strength in traffic,” Trojan said.

By adding the Tri-Tip entrees to the Brewhouse Special lineup, guests have the opportunity to get a value meal on a Thursday night. Other specials include 50 percent-off large pizza Monday and $3 Pizookie Tuesday deals.

“When we look at our Brewhouse Specials they've continued to perform well for us,” BJ’s CFO Gregory Levin said. “I was just looking at our Pizookie incident rate and frankly that number was flat with a year ago. That tells you that our guests are still liking it.”

The Brewhouse Specials are a strong contributor to transaction growth, but that doesn’t mean other areas of the menu are being ignored. Higher priced entrees, like prime rib, which is only available on the weekend, continue to perform well along with the brand’s lineup of healthier items, like zoodles, which aren’t included in the specials.

Investments in menu innovation, upgrades to the kitchen, and infrastructure to accommodate the growing off-premises part of the business has put a lot on the plate for operators, Trojan said. These initiatives are important for the brand, however, if it wants to stay competitive with other casual dining chains. “[There’s] still room for improvement, of course, but we continue to build greater separation in terms of guest experience versus our competition,” Trojan said.

On average, each restaurant spent about 125 hours completing the kitchen reorganization that was rolled out last quarter. At the end of Q2, between 160­–170 locations—or about 80 percent of the system—were operating with the Gold Standard Kitchen System. Levin expects the whole fleet to be updated by the end of July.

After evaluating existing processes, including ordering, storage, and prep work, the new system was developed to eliminate inefficiencies in the kitchen. The new layout optimizes processes for in-house operations and allows restaurants to expand off-premises business.

“Our gold standard kitchen systems are creating a new level of kitchen organization and process driving even better food quality and speed while as importantly making our kitchens more satisfying places for our team members to work,” Trojan said. “While our investments in training and labor came at a somewhat difficult time given the wage pressures we're facing, we believe we're making this investment at exactly the right time.”

“[There’s] still room for improvement, of course, but we continue to build greater separation in terms of guest experience versus our competition,” BJ’s chief executive officer Greg Trojan said.

The new layout is still in its infancy, but restaurants are already seeing positive results and are operating more effectively. Trojan said some labor savings could come from the new systems but that wasn’t the main goal for the upgrades. The development and implementation of the Gold Standard Kitchen was created to help with the quality of food and workplace for employees. Once retraining is complete and employee behaviors change, Trojan believes the brand could see improvement in efficiency in terms of employee hours.

Off-premises remains strong for the brand, but there’s still room for improvement. During Q1, BJ’s hit an all-time high for off-premises sales, making up 10 percent of overall mix. That figure remained the same for Q2.

The makeup of this segment breaks down to an almost 50/50 split of delivery and takeout. However, more recently BJ’s has seen an increase in takeout. Levin says they are experiencing more of return there because they don’t have to pay commissions to delivery companies. Investing in a new online experience and ordering system has made ordering easier and more convenient for customers and employees.

When it comes to delivery, BJ’s is experimenting with different third-party partners to find the best experience for customers. It remains a new area and BJ’s is still in its infancy navigating that part of the business. Trojan admitted there’s a lot of competition in the space and it’s becoming more difficult to stand out among competitors.

“We're working with third-party partners and putting [chief marketing officer Kevin Mayer’s] teams creative hats on to look for ways where we can stand out and differentiate more than just the standard offers,” Trojan said. “It's going to take some trial and error to find that right balance.” 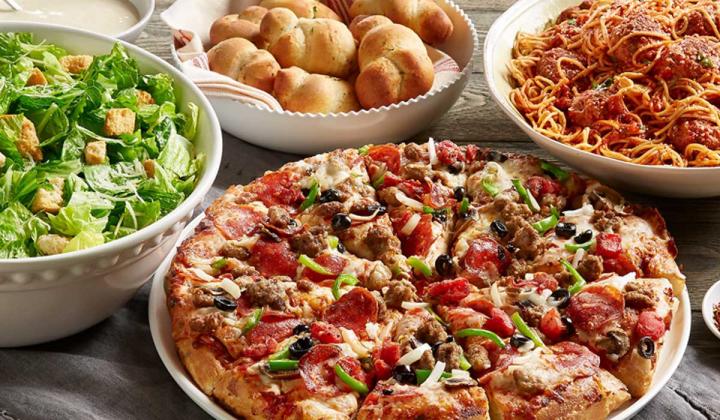 BJ’s catering business has a lot of room to grow. Currently, it makes up less than 1 percent of sales. In Q3, execs are funneling money into different marketing strategies to highlight the different catering packages BJ’s offers. Trojan didn’t want to go into specifics about the actual campaigns, but he did say the promotions will highlight the product lineup and a competitive starting price point—$10 per person—for large parties.

“Large party catering is a relationship business at the end of the day, particularly the B2B portion,” Mayer said. “So, we have a plan in place to make sure our restaurant teams are involved in making sure people in their trade areas know about this great offering that we have as well.”

The road to 425 locations

The investments BJ’s has made so far are not only benefitting existing restaurants, but are setting up the brand for success as it expands into new markets. During Q2, BJ’s opened two new restaurants in Sterling Heights, Michigan, and Toms River, New Jersey. BJ’s expanded into Connecticut during the third quarter. The opening of the Manchester, Connecticut, location marked the 206th location for the brand.

“We expect to open an additional restaurant in the third quarter and two restaurants in the fourth quarter, thereby achieving our goal of opening seven restaurants this year,” Trojan said. “We remain committed to our long-term expansion plan and expanding our platform to over 425 restaurants over time. Accordingly, our development team is building a solid pipeline for fiscal 2020 and 2021 new restaurant openings.”

BJ’s growth strategy puts quality over quantity. The company is in a place where it can efficiently open new high quality restaurants at a consistent rate, Trojan said. There is still a long way to go, but Trojan is comfortable with the progress the company is making. The last eight locations to open are performing well so far. Weekly sales averages are over $116,000 or about $6 million average unit volume for the year, which marks some of the best openings in recent years, Trojan said.

BJ’s has also found the formula to cutting down the overall cost of opening new locations. A decade ago, it cost $5 million to build a new restaurant. Through value engineering and other cost-saving measures, the cost is around $4 million today.

“We’ve just come to the fact that we're going to build quality over quantity,” Levin said. “We've never been on an investor call saying that we're going to close 20 out of the last 40 or 50 restaurants we've opened. We're very prideful that we go out and select great place, great locations, and execute them well.”

Even after the honeymoon period comes to an end for new locations, BJ’s doesn’t see too much of a change in performance as locations age. Around 18 months, comparative sales begin to flatten, Levin said, but that doesn’t scare them.

Trojan added, “The BJ's growth story continues to have a long road ahead and I think you'll agree that our recent results are a strong indication that we continue to make progress and building on the strength of the BJ's brand to provide the industries best guest experience while delivering increased value for our shareholders.”