The $120—$150 million ONE DAYTONA will feature everything from a movie theater to luxury hotels.

Restaurants Flock to Upcoming ONE DAYTONA

First-to-market brands can find a profitable home in mixed-use developments. Especially one with this kind of potential.

Mark McKee often travels from his Orlando office to his home in Kansas City. The CEO of Ace North America LLC, the Central Florida franchisee of Oklahoma Joe’s, wasn’t intending to conduct business at 20,000 feet. He just happened to keep running into somebody who shared a very specific interest.

“We got to talking one day about ONE DAYTONA, and I find out he’s a big Oklahoma Joe’s fan,” McKee says of Jeff Boerger, the president of corporate development for International Speedway Corporation. “One thing led to another, and here we are.”

When it comes to multi-use developments, especially one with a scope as large ONE DAYTONA’s $120—$150 million project, it’s easy to connect the dots from major chain to prime location. For example, P.F. Chang’s was the first to sign up for a spot in the retail, entertainment, hotel, and living complex facing the famed Daytona International Speedway. But how smaller restaurants and first-to-market brands find their way into the blueprint is a different story.

Oklahoma Joe’s, which was founded in Stillwater, Oklahoma, by Joe Davidson in 1994, has three locations in its home state and one in Virginia. McKee is also franchising a store on the Acé Cafe Orlando grounds in downtown Orlando. Called “One of the 13 places you have to eat before you die,” by Anthony Bourdain, McKee knew the concept would resonate in Daytona’s evolving landscape. So did Boerger.

“We wanted to go after restaurants that are not only first in market, but have a track record and history of success and sustainability,” Boerger says. “That was important to us. We wanted this development to be unique.”

Oklahoma Joe’s is going to be massive: 6,500 square feet equipped with a staff and operation capable of delivering extremely high volume, even during sporting events, such as Speedweeks, which is capped, of course, by the Daytona 500.

“We’ll be race-ready,” McKee says. “… Our 6,500-square-foot location in ONE DAYTONA will be built for high-volume and catering, and our team enjoys nothing more than the excitement of race day.” 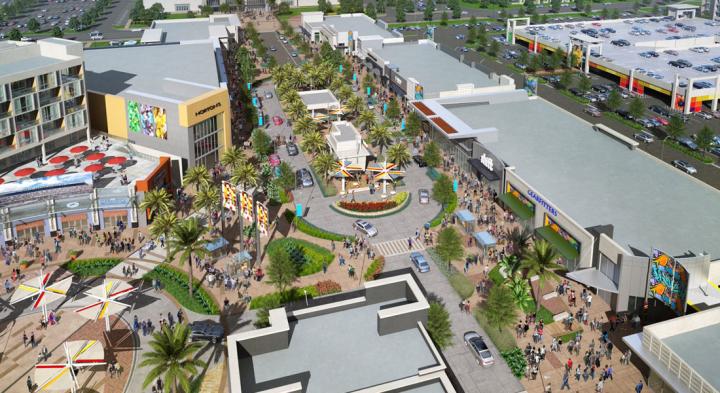 ONE DAYTONA is unfolding in stages.

While this pairing of barbecue and racing was a fortuitous connection, it follows a strategy Boerger and his team have deployed since day one. The project set out to create a lifestyle epicenter worthy of the remodeled Speedway, which invested $400 million to create a venue capable of hosting everything from concerts to racing, and, it hopes, everything in between and beyond. There are now 101,500 permanent seats, 60 trackside luxury suites, 11 social areas called “neighborhoods,” each the size of a football field, and five expanded and redesigned fan entrances, or “injectors,” complete with 20,000 square feet of engagement space.

Needless to say, any development erected within shouting distance presented a golden opportunity for restaurants with the proper infrastructure in place. However, in addition to stability and quality, Boerger says there was a certain “it” factor he was looking for in perspective operators.

“In fact, a lot of the tenants we’re working with are going to be first in market and that’s been our philosophy,” he says. “We want best of class. We want tenants who are first to the community, which I think we’re currently about 90 percent new to market. It’s going to be a great opportunity to showcase their businesses, but then it also creates a destination for our development, which has been one of our goals from the beginning.”

There needs to be a mix, Boerger says, of the icons and the rising stars. ONE DAYTONA has a 67,000-square-foot Bass Pro Shops, for instance, as well as a Jeremiah’s Italian Ice and Kilwins Confections.

Rock Bottom Restaurant & Brewery, which has 31 units from Charlotte, North Carolina, to California, is making its Sunshine State debut in the complex. Tony Montero, the senior vice president of operations for the Brewery Group, believes the multi-use development will present myriad benefits for his brand.

“The site was presented by one of our real estate partners. We spent a lot of time in the market evaluating the site and the area and we knew we had to be part of this development,” he says. “This is going to be such a great location for Daytona Beach and the east Central Florida region. Rock Bottom will have a rooftop patio that will overlook Daytona International Speedway, which is such an iconic sports destination and an opportunity unlike any other.”

Rock Bottom has an onsite brewer who creates recipes unique to each location. They’ve won over 200 national and global awards, including multiple honors at World Beer Cup and the Great American Beer Festival. He says operating near a sporting venue of this stature isn’t a concern. “The good news for us is that we have several locations that are in areas that are very event driven as well. We also have other restaurant brands in the Florida market to help support on busy weeks,” he says. “Our guests always come first and no matter the crowd we are committed to making sure every guest feels like they belong and has a great craft beer experience paired with crave-worthy food. We will staff to execute at the highest level to make sure we take great care of our guests.”

The development is unfolding in stages. The movie theater is already open. Boerger expects around 275 residential units to come on line first quarter 2018. Many of the features, like the hotels, which include the 144-room Marriott Autograph Collection space, The Daytona, and a 105-room Fairfield Inn & Suites, should debut in 2017. That includes plenty of the restaurants, retail, and entertainment venues.

“We are creating this critical mass, which not only will be a destination, but you can live, work, and play within our ONE DAYTONA campus, which should be very exciting for the area as well,” Boerger says, adding that they’re targeting 30 to 40 percent occupancy for casual dining.

As for the area, Gentry Baumline-Robinson, communications director at International Speedway Corporation, says that the Daytona Beach market is an “underserved” landscape. But with the revamped Speedway, Baumline-Robinson doesn’t expect that to remain the case for long. The changes have opened doors for all kinds of events, including the Country 500 Music Festival and the Ferrari World Finals, which is headed to North America for the first time in its history.

“I think operators are looking at us as a unique opportunity in Central Florida, which is a very desirable area in its own right. The Daytona Beach market has traditionally been underserved from a chain type restaurant perspective even though the quality is there,” Baumline-Robinson says. “That’s about to change.”