CEO says the chain is the best business in casual dining—by a lot.

From a sales standpoint, Olive Garden’s isn't pacing with its casual-dining competitors.

He said Darden is “running a business here to try to drive profitable sales growth.” To his point, Olive Garden achieved $281.6 million in segment profit in Q4 and restaurant-level margins of 25.5 percent, both company records. The chain also broke its single-day sales record on Mother’s Day.

“We've got our businesses doing over $5 million for average-unit volumes,” Lee told analysts during Darden’s Q4 conference call. “In the fourth quarter, we put up 25 percent restaurant-level margins. Isn't our job to try to drive profitable sales growth? And that's what we're focused on. And so there are a lot of reasons why we're not keeping up with where some of the other people are going. There's a lot that's changed in two years and how they're handling their businesses. Some of them have virtual brands and all this other stuff that's out there.”

“I mean, guys, you got to get off this,” he continued. “... this is the best business in casual dining, not even by a little bit anymore, by a lot.”

Though Olive Garden usually garners the most attention, 533-unit LongHorn Steakhouse appears to be the current star. The brand captured a record $118 million in segment profit in the fourth quarter, or a 982.6 percent rise compared to 2020. The concept also saw same-store sales grow 9.9 percent, 16 percent, and 15.5 percent in March, April, and May, respectively.

COO Rick Cardenas attributed LongHorn’s success to investments in the past five years and improvement of the value perception.

“They moved from middle of the pack to No. 1 [in industry rankings], and so I think LongHorn's performance is just a combination of a lot of work over a great period of time," he said. "I want to also recognize that the whole steakhouse segment is moving. The whole steakhouse segment has outperformed the other segments. And I believe the segment has high-value perceptions. So they're definitely getting the segment lift, but they've also done a great job and they're executing at an extremely high level.” 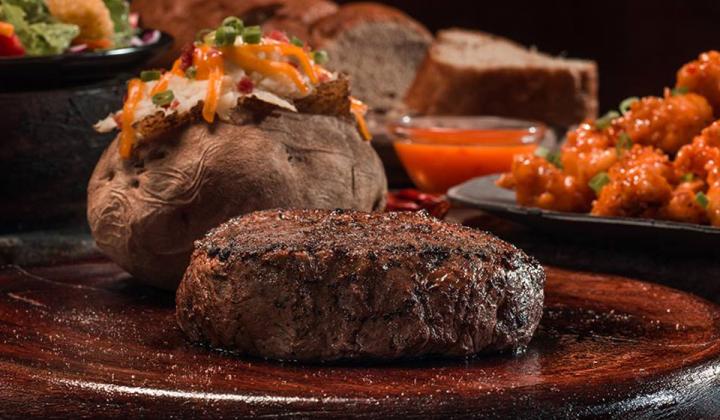 Overall, Darden achieved a record restaurant-level EBITDA margin of 22.6 percent—310 basis points above pre-COVID levels—and captured record quarterly EBITDA of $412 million. Darden said the results were driven by reduced labor and marketing expenses as it continues “to focus on simplified operations while also continuing to invest in food quality and pricing below inflation.”

The company’s performance exceeded expectations of leadership. That’s especially true for the growth of off-premises, which Cardenas said is “stickier than we originally thought.” Sales outside the four walls mixed 33 percent at Olive Garden, 19 percent at LongHorn, and 16 percent at Cheddar’s Scratch Kitchen thanks to technology enhancements to online ordering and the introduction of to-go capacity management and the “Curbside I’m Here” notification.

Lee said it’s still too early to tell how the balance of dine-in and off-premises will shake out since consumer behavior hasn’t quite returned to 100 percent normal yet. But the CEO admitted that he was wrong in terms of how much off-premises would remain in the post-COVID environment. One of the reasons he thinks the channel is still so high is because there isn’t that much cannibalization with dine-in, meaning, off-premises customers are using the restaurant as a home meal replacement as opposed to replacing a dine-in occasion.

“I think I'll give the analyst community credit on this,” Lee said. “This was stickier than what we thought. We know we've reached some new consumers here, and the experience is very, very good. And so I think that we don't know where it's going to net out. It's going to net out a lot higher than it was pre-COVID, and I think it's something that's part of our business we will have to pay a lot more attention to as we move forward.”

Sixty-four percent of Olive Garden’s to-go orders were placed online in Q4, and 14 percent of Darden’s total sales were digital transactions. Cardenas said this allows Darden to gather more information about the customer, and gives it the ability to market to them in the future.

“We haven't really done a whole lot of marketing in the last year,” Cardenas said. “Olive Garden has done their TV because we have bought that media already. We've done some digital marketing just to keep the digital marketing moving, but we haven't really started focusing on those new customers and speaking directly to them. And as we start thinking that we need to ramp things up, that's a great source of people to market to now that weren't coming to us before.” 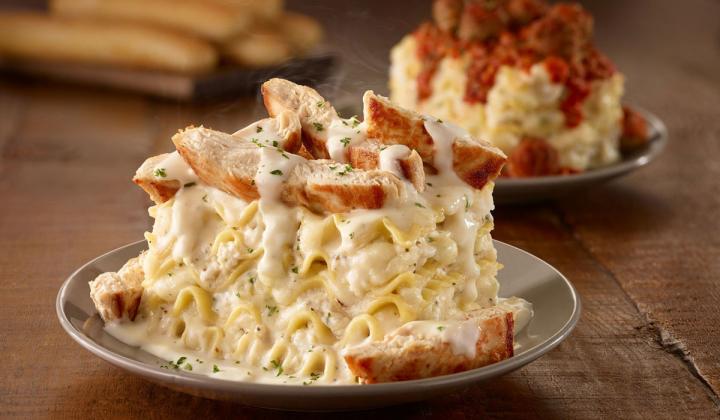 Darden is accomplishing all of this without any systematic issues with staffing. Lee explained that part of that is due to the significant investments Darden has made in team members. The company invested roughly $17 million to give one-time bonuses to nearly 90,000 hourly workers at company-run restaurants. And in March, tipped and non-tipped employees started earning at least $10 per hour, including tipped income. The wage will rise to $11 per hour in January 2022 and $12 per hour in January 2023. On average, hourly workers earn more than $17 per hour, including servers and bartenders, who earn more than $20 per hour.

In addition to that employment proposition, there’s the ability to grow as Darden promotes 1,000 team members per year into management. The chain actually hit a record number of hires in Q4.

“I think that we're in great shape from an employment standpoint,” Lee said. “We'll continue to invest, we'll manage, we'll do great salary administration, ensure that we are paying competitive wages. And I think that we have the flexibility to manage the wage inflation because of our margin structure. And combined with our pricing philosophy, I think we have some room there, if need be, to offset that and to be able to increase wages if we need to.”

Looking toward fiscal 2022, Darden expects total sales between $9.2 billion to $9.5 billion, or 5 percent to 8 percent growth from pre-COVID levels. The company also projects EBITDA of $1.5 billion to $1.59 billion and the opening of 35 to 40 new restaurants.