Barrio Queen operates seven stores in Phoenix, with another set to open in December.

With the purchase, BBQ Holdings will change its name to Famous Hospitality.

After a busy M&A season in 2021, Famous Dave's parent BBQ Holdings has already signaled in 2022 that its not quite done buying restaurants.

On March 10, the company signed a $28 million asset purchase agreement to acquire Barrio Queen, a Mexican fine-dining chain based in Phoenix. The concept has seven stores and a lease signed for an eighth store that's scheduled to open in December. In 2021, Barrio Queen generated $35 million in revenue and $5 million in AUV. BBQ Holdings believes the brand has franchising potential, with a 19 percent restaurant-level margin.

A day after inking the Barrio Queen agreement, the company closed a $4.5 million purchase of two bar concepts Fox & Hound and Craft Republic. As part of the deal, BBQ Holdings took in three corporate locations that earned $8.5 million in revenue and $2.8 million in AUV.

Also, with the increased portfolio diversification, BBQ Holdings will change its name to Famous Hospitality.

“The fourth quarter of 2021 marked another successful quarter of strong operational execution and company growth," CEO Jeff Crivello said in a statement. "We continue to successfully execute our three core growth initiatives which include filling latent capacity of our current restaurants, organic unit growth, and build a diversified portfolio of food and beverage brands via accretive M&A."

The acquisition of Barrio Queen and the three bar concepts follows the 2021 purchases of Village Inn, Bakers Square, and Tahoe Joe's for a combined total of approximately $20 million.

As the company's portfolio becomes more diverse, so does its operational models. In August, Famous Dave's opened its first line-serve store in Las Vegas and debuted another in Coon Rapids, Minnesota, in October—both under the leadership of franchisees. 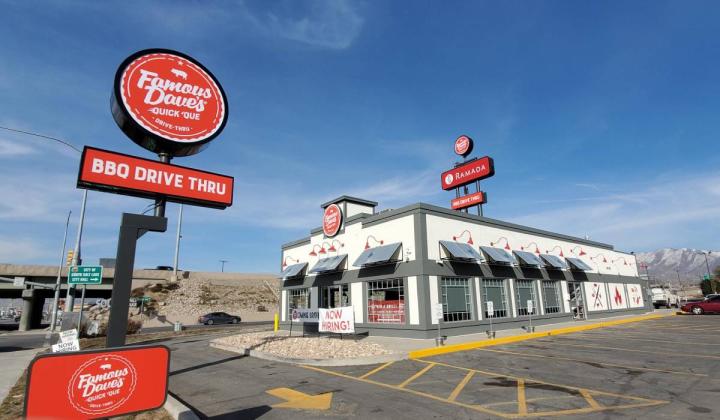 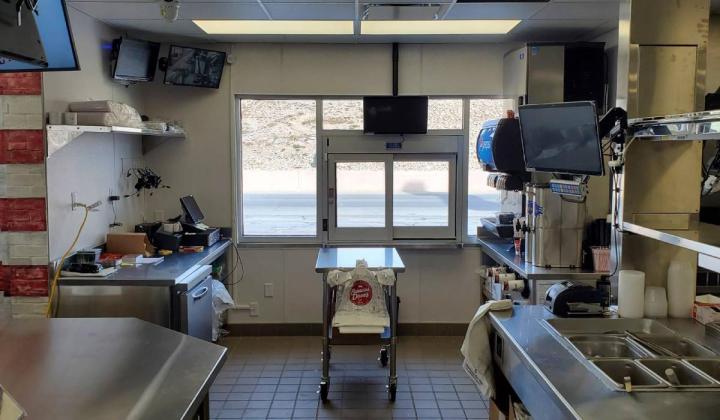 "Our goal is convenience for the customer," Crivello says. "Four years ago, we had this idea because it can be done. Barbecue takes many, many hours to prepare properly, and so it's not as if we're cooking the food, the proteins, on demand. So we're ready to go when the customer comes in, and we can do that in a format that is conducive and convenient for the guest, which is a drive-thru.

"Everybody either has the kids in the car or they're on a call or the weather is bad, whatever it is," he adds. "People like the convenience of being able to just stay in the car and there aren't enough opportunities for that to happen and have good quality food handed to them through the window and famous Dave's has exactly that."

A second company-operated drive-thru store with a modular design will open in Q1 2023.

The first Village Inn prototype—which is a refresh of the existing footprint—is scheduled to open in Omaha, Nebraska, sometime in the second quarter. As part of the enhancement, the menu will have a "handful of higher-end choices" like banana cream French toast, triple berry pancakes, and cheesecake French toast, and healthier options like avocado toast and acai bowls. Two more corporate sites and six to 10 franchises will undergo refreshes in 2022.

Additionally, a co-branded Granite/City Village Inn restaurant opened in Maple Grove, Minnesota, in March. BBQ Holdings believes the partnership has the potential for an additional $750,000 in revenue and $225,000 in EBITDA per location. Village Inn is open from 7 a.m. to 3 p.m. while Granite City runs from 3 p.m. to 11 p.m

In Q4, a dual concept Famous Dave's and Tahoe Joe's restaurant will open. The expectation is $800,000 in additional revenue and $200,000 in EBITDA per restaurant. The barbecue chain already has co-branding formats with Texas T-Bone Steakhouse in Colorado Springs and with Cowboy Jack's steakhouse in Woodbury, Minnesota.

In terms of ghost kitchens, seven Famous Dave's restaurants are selling Bakers Square pies and further rollout is planned for Q2 and Q3. The barbecue chain also has virtual brand $5 Burgers, which has 25 percent flow through to the bottom line.