The casual chain wants to expand its reach through off-premises opportunities.

Over the past few years, Chili’s has worked on an off-premises strategy that reflects its brand experience.

It expanded reach in June when it linked with DoorDash after years of multi-vendor testing. Initial results showed the partnership boosted the percentage off-premises sales contributed to Chili’s overall business, but there was still room to grow the channel.

“Delivery is a powerful channel for our category, the players who do it right, open the door to a drastically larger number of deal experiences and greater guest frequency,” Brinker International chief executive officer Wyman Roberts said during the company’s fiscal 2020 first-quarter review.

On October 1, the 1,619-unit chain (1,241 in the U.S.) rolled out delivery features on its website and app that allow customers to order directly through those channels, in addition to DoorDash’s sizable platform. The brand featured online ordering previously, but it was reserved to pick-up or curbside.

Here’s a look at domestic same-store sales trends for Chili’s:

And traffic (at company stores)

“We’re executing at a high-level and the breadth of our menu mix and strong value positioning make Chili’s a compelling delivery choice and we’re just getting started,” Roberts said.

Along with expanded delivery capabilities, Chili’s take-out platform remains strong. Q1 marked the eighth consecutive quarter of positive growth. Roberts doesn’t see why delivery can’t have the same results in time. Its “ChilEASE” campaign, which launched the news about Chili’s delivery updates, is the first of many initiatives planned to boost delivery awareness.

Continued growth of take-out and delivery go hand-in-hand, Brinker CFO Joe Taylor said. Chili’s current marketing is heavily focused on delivery because it’s the newest channel. However, that visibility to customers will open them up to the brand’s other ordering options. 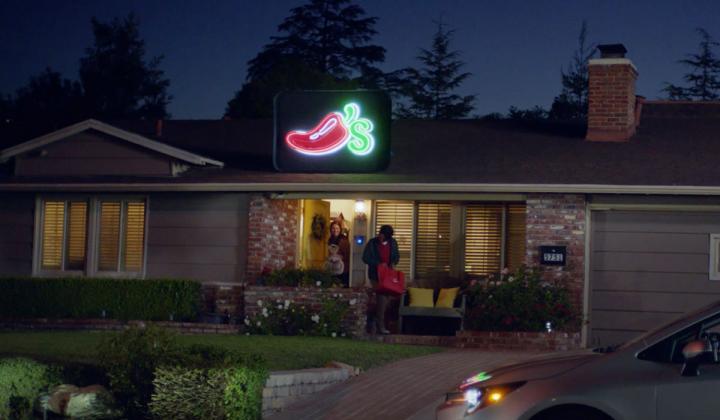 “One of the reasons we're focusing on creating great experiences because as our guests have that experience, we want to make me want to make sure they want to come back again, because we believe that it is part of our future,” Chili’s freshly minted chief marketing officer Ellie Doty told FSR.

“Providing convenience initiatives that play to where the consumer is, whether or not they want it delivered or they want to pick it up, or want to dine-in it is critical, that convenience has to play across all of those channels,” Taylor said. “I think we are well established now to leverage that going forward.”

The integration of new technology and strengthening of existing digital platforms expanded the brand's ability to meet customer expectations, Roberts said. Two-thirds of Chili’s off-premises sales are coming through digital channels and the company expects that figure to grow.

“We’re bringing to bear the digital expertise we’ve been methodically building over the past couple of years and it’s a significant differentiator for us,” Roberts said.

A little over a year ago Chili’s rolled out new value menu offerings, and one of them continues to be a major player for the brand. The 3 for $10 deal, which features an appetizer, entrée, and drink at the price point, continues to perform well even though its only available for dine-in or take-out orders.

After lapping the introduction of the 3 for $10 deal last quarter, Chili’s is now in a steady state with the product’s integration into menu mix. Taylor expects to see consistent results moving forward. The foundation of the deal has been built over the last year and now the chain can look at different opportunities to build out its value platform.

Innovation hasn’t been a major factor for Chili’s value strategy so far, but Roberts said the team is cooking up some ideas to leverage different deals during the second half of the year. As more casual chains move toward value promotions, Chili’s wants to stay competitive.

During Q1, the chain saw movement in other areas of the menu, like add-ons, appetizers, and the bar program. Moving forward, it will look at ways to leverage those parts of the menu mix. The brand remains focused on building in menu items that work in the long run rather than moving LTOs in and out of the system, Roberts said.

“What we’re looking for are really compelling innovations that they resonate with guests,” Roberts said. “We’re holding a much higher standard in the culinary and the marketing team are stepping up to those standards in terms, so when we talk about putting something into the restaurant, it’s got to have breadth and it’s got to make a difference.”

In September, Brinker completed the acquisition of 116 Chili's restaurants from its 14-year franchisee, ERJ Dining. Along with the positive sales growth, Brinker will rely on the newly acquired restaurants to boost positive quarters in the future.

The newly owned restaurants are expected to bring in about $250 million in sales by the end of fiscal 2020. Their performance wasn’t heavily felt in Q1 as they only were figured into the last three weeks of the quarter, but their impact will be felt in the coming quarters, Taylor said.

“Now that the Midwest franchise acquisition is complete, our restaurant operating margin will benefit from the additional sales leverage provided by these restaurants over the course of our three remaining quarters,” Taylor said.

“We’ve deployed a strong leadership support team for these restaurants to accelerate their transitioning into our system and leverage the upside of the existing team,” Roberts added.