The Cheesecake Factory Leans into Development and Growth for Sales Boost

Executives believe building out the brand, along with its newly acquired concepts, will strengthen the company's future.

The Cheesecake Factory is ready to speed up development thanks to a growing portfolio. A new location in Gainesville, Florida, opened during the third quarter of fiscal 2019 and another three are expected to debut by year’s end.

But beyond the Cheesecake brand, the company expects to build out the footprint of newly acquired North Italia and fast-casual Flower Child as well. Chief executive David Overton said it will bring six Cheesecake Factory locations, six North Italias, and eight Fox Restaurant Concepts⁠, including five Flower Childs, to market next year.

“[With] the strength of The Cheesecake Factory brand, coupled with accelerated and diversified growth drivers in North Italia and the FRC concepts, we believe we are well-positioned to provide our guests with exceptional dining experiences, offer growth opportunities for our respective teams, and maximize long-term value for our shareholders,” CFO Matt Clark added.

In April, a smaller 5,500-square-foot prototype arrived in Oxnard, California. The model proved successful and continues to surpass brand expectations, Cheesecake Factory president David Gordon said. This design will now be it used in the chain’s international expansion. During Q3, a second location opened in Abu Dhabi, followed by the chain’s first in Macau.

“Our international partners, most specifically in Asia, are excited to see that because they do believe it will allow them hopefully to find some real estate sites that are not available today,” Gordon said, noting the current 7,000-square-foot box.

There are six new global locations in the pipeline with at least four expected to open in 2020.

Despite a dip in guest traffic—a 3.7 percent decline due to a slow start to the quarter—Q3 saw same-store sales lift 0.4 percent lift in same-store, year-over-year, building off the comparable period’s 1.5 percent gain.

The company’s growing off-premises business also contributed to the quarterly result. Remaining consistent from Q2 to Q3, the channel continues to mix 16 percent of overall sales.

Although some analysts pointed out the sales segment plateaued, leadership wasn’t worried about the long-term outlook. Seasonality, especially summer and college, creates a little up-and-down movement for the off-premises business, Clark said. But overall that’s not a concerning notion.

“We still feel like it’s growing,” Clark added. “We think that if that can grow 1 to 2 percent a year we are going to be happy and that’s what we believe. I think other people have put bigger numbers out there maybe overshooting it.” 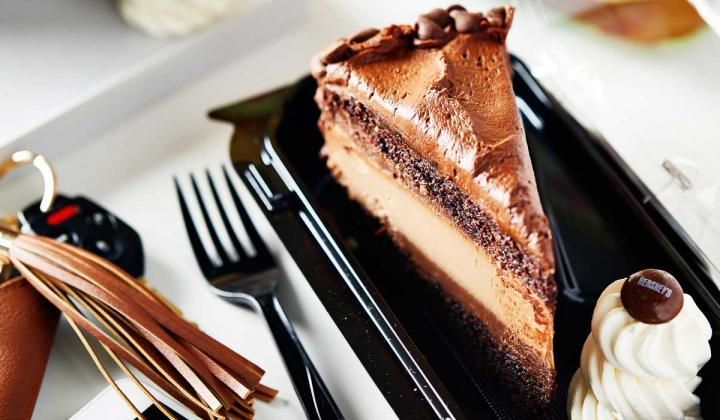 Delivery makes up 35 percent and online ordering was slightly up from last quarter contributing 13 percent. Some might find it surprising, but more than 50 percent of all transactions are still phone-in orders, Overton said.

After renegotiating terms, DoorDash will remain the brand’s exclusive delivery partner. The companies entered into the partnership in August of 2018, so The Cheesecake Factory expects to see the results of year-over-year growth soon. It will also analyze data from its own online ordering platform for pickup orders, Gordon said.

As the Cheesecake Factory evolves, its marketing strategy needs to shift as well. The company is diversifying strategy and looking at different avenues compared to what it’s done in the past, Overton said. Word-of-mouth once meant telling a friend face-to-face. Now those conversations are happening over social media. The brand is looking to leverage those channels, along with TV spend, Overton said.

“We just want to remind people, especially those that maybe aren’t thinking of us in some of those other markets as frequently as we would like that we're here,” he said.

Consumer research showed The Cheesecake Factory’s message resonated with guests and their purchase intent increased, Gordon said. “In turn, we are considering additional targeted media buys in the future,” he added.

Margins across the casual-dining segment continue to decrease. The Cheesecake Factory’s ability to adjust allows it not to feel the pressure of margin changes as much, Clark said. Over the past five quarters, the company has hit margin objectives with the help of positive same-store sales, he said, which translates to top-line stability.

“The key is comparable store sales, keeping that in that 1 to 2 percent range,” he said. “I think we have proven that if that’s the case we are holding four-wall margins flat.”

The new agreement with DoorDash also brings the margin close to what it would equate to for a dine-in guest, further balancing out the equations, Clark said.

READ MORE: The Cheesecake Factory Puts the Focus on Employees

Gains in the labor war are also driving positive comps. Productivity and employee retention both increased year-over year and there was a decline in the amount of overtime hours, Overton said. Focusing on staffing strategies and forecasting the demand during different dayparts is part of Cheesecake Factory’s ongoing labor plans. Clark expects the positive trend to continue in Q4 and into 2020.

The acquisition of North Italia and Fox Restaurant Concepts was completed at the end of Q3 on October 2. The $353 million deal reinforces its position in the casual-dining industry, Overton said.

“My experience working with the North Italia staff members, as well as Sam Fox and his team at FRC has reinforced our belief that our two companies can drive greater value as one organization,” Gordon said.

Currently, both brands are working on a comprehensive integration plan. Conversions for FRC's point-of-sale system to run on the same platform as The Cheesecake Factory are expected to finish shortly.

“We are maintaining the integrity of North Italia Concept and everything that makes it so special to guests,” Gordon said. “While enhancing the systems and processes to further strengthen operations and support the continued national expansion of the concept.”

Another benefit the brands will receive is an extension of Cheesecake Factory’s exclusive delivery deal with DoorDash. Leadership will continue to look for future opportunities that make sense for the brands to partner on, whether that’s buying chicken together or further integration of technology platforms, Clark said.