Companywide, The Cheesecake Factory earned a record $769 million in revenue in Q2.

Stores are earning $3.2 million in average off-premises sales per unit on an annualized basis.

The Cheesecake Factory frequently discussed whether it could maintain $1 million in average off-premises sales per unit through this point of the year, CFO Matthew Clark said.

With fully opened dining rooms in the past month—particularly the reopening of the brand’s home base of California—the 207-unit chain not only reached that benchmark, but soared past it. As it turns out, The Cheesecake Factory has been able to keep $1.6 million in average off-premises business per store thus far in 2021, which would stretch to $3.2 million on an annualized basis.

Quarter-to-date, restaurants are averaging $61,000 in off-premises sales per week, which is double compared to pre-COVID. Off-premises is accounting for 27 percent of total sales, down only 4 percentage points from the end of June. Even in the states that have had 100 percent capacity for a longer time, like Florida and Georgia, off-premises mix still remains in the mid-to high 20s.

“We still feel pretty bullish that our ability to execute off-premises very well along with the value of the menu and the offerings of the menu that we will continue to hold a good portion of the off-premise growth,” president David Gordon said Tuesday during the brand’s Q2 earnings call.

Sales outside the four walls have fueled quite the summer surge for The Cheesecake Factory. Same-store sales in Q2 rose 7.8 percent compared to 2019, and the chain achieved a record-breaking $769 million in revenue. Quarter-to-date, comps are growing 10 percent versus pre-COVID and average weekly sales have reached $230,000, equating to a $12 million AUV on an annualized basis. That’s up from the end of May, which saw $226,500 in average weekly sales, or $11.6 million in AUV on an annualized basis.

Whether the brand is able to maintain its pace of $230,000 in average weekly take is still a wild card, Clark noted.

"But I think we feel like the business, as it's progressed really from the middle of March until now, has taken on the characteristics that are hallmarks of The Cheesecake Factory, which are really predictability and dependability,” he continued. “We still have plenty of capacity. So I still think that there are opportunities in both of those channels [on-premises and off-premises] to continue to drive sales going forward. So we'll see where it goes, but we're happy with the trajectory as it stands today.” 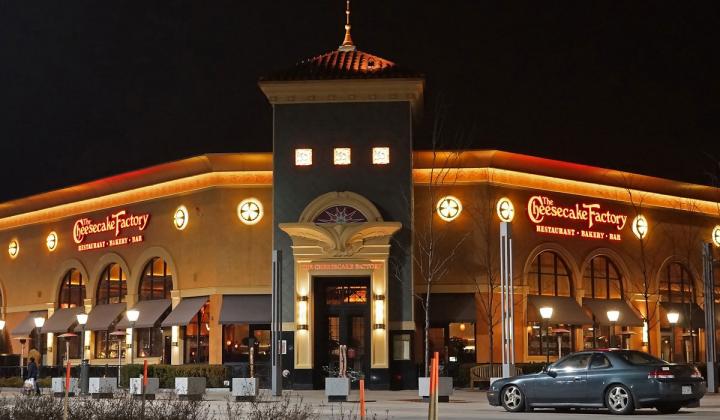 One Cheesecake Factory restaurant earned $100,000 in sales on Mother's Day.

Because of the strong sales, The Cheesecake Factory is shifting its marketing back to brand-based messaging—a move that could have a significant impact on the company’s off-premises trajectory. With a rollout planned for next year, the chain plans to migrate its email database to a more robust CRM system to work hand-in-hand with a new rewards program, Gordon said. In the meantime, The Cheesecake Factory is revamping its website to become a more “commerce-forward platform” with a goal of increasing conversion rates and average order values for online orders. The new website is expected to launch by the end of 2021.

Gordon said there’s no reason why the brand wouldn’t be able to use the rewards program in a targeted manner.

“If we make a decision that we want to target off-premise opportunities as we did throughout COVID, we'll have the flexibility to do that as we learn more about those guests, which will be a key component of the overall strategy,” Gordon said. “It's to understand a little bit more about our guests generally, whether that's our ordering preferences or their spend habits and how we can continue to grow that spend over time, and that could be done through off-premise channel and also hopefully will be done by driving traffic back into the restaurants.”

The Cheesecake Factory’s sister brands, North Italia and Flower Child, are feeling a similar bump. For example, North Italia’s comp sales lifted 10 percent in Q2 compared to two years ago, and quarter-to-date, comps remain at the same growth pace. Also, off-premises is mixing 15 percent, down only 5 percentage points from Q1. Average weekly sales for all Fox Restaurant Concepts totaled $103,000 in the quarter.

Gordon has confidence in future expansion of Fox Restaurant Concepts, a group it agreed to acquire in the summer of 2019. The president is particularly optimistic about Flower Child.

“I think we still feel really great about Flower Child,” Gordon said. “We're sitting at 27 restaurants today in 10 states. It continues to perform well in just about every state, every different type of geography that it's going into. So we feel good about it. It did perform well and has performed well through COVID. I think they do a great job with off-premise execution.” 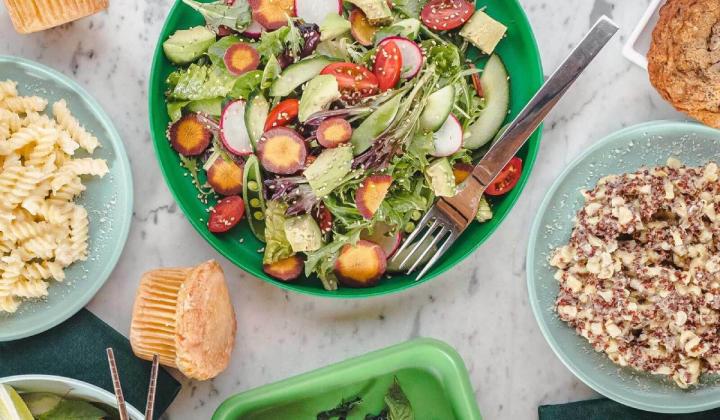 Flower Child has 27 stores in 10 states.

Looking toward the future, two North Italia restaurants opened in Miami and San Antonio in the second quarter, and another opened last week in Nashville. Flower Child debuted a store in Atlanta in Q2. The company is on pace to open as many as 14 locations across all of its concepts in 2021.

Gordon is still confident The Cheesecake Factory can reach the 300-unit threshold and that the company overall can reach 7 percent unit development growth.

“The pipeline looks strong across Cheesecake Factory, North, as well as some of the other FRC brands,” Gordon said. “The good news is our real estate strategy continues to be just looking for great 'A' sites, and we see some good availability out there, whether that is in a traditional mall location or for some of the other brands in the lifestyle center or even smaller centers when it comes to a Flower Child as an example.”

When it comes to staffing, Gordon said restaurants have seen pockets of challenges as markets fully remove restrictions and the labor market stays tight, but it hasn’t meaningfully affected sales trends. The company is actually above pre-COVID staffing levels and has lower hiring needs than it did at the end of April.

The Cheesecake Factory was recognized on Fortune Magazine's 100 Best Companies to Work For list for the eighth consecutive year and recognized as the best workplace for millennials. Both accolades give the company confidence that it can maintain industry-leading retention at both the manager and hourly staff levels. The Cheesecake Factory and North Italia both saw increases in guest satisfaction rates compared to 2019, which the company believes is contributing to the successful sales trends.

“Our staffing levels are now above where they were pre-COVID,” Clark said. “Certainly, with the sales strength, we want to continue to be able to support that. But we have slightly fewer needs now than we did at the time of our last call. So we've done a good job. It's just that we're so dang popular, we have to keep up.”