Zoe Adjonyoh is on a Mission to Unite Women-Led Organizations

Last December, she joined the James Beard Foundation as director of its women leadership programs.

Although Zoe Adjonyoh is now a celebrated chef, food consultant, cookbook author, and activist, her path to the hospitality world was a circuitous one. In school, she studied journalism and law before launching into a media career. But curiosity around her own heritage prompted her to explore West African cuisine and immerse herself in the food world. A little over a decade ago, she founded Zoe’s Ghana Kitchen, a multi-platform business that has hosted pop-ups, supper clubs, corporate events, cooking classes, and more. In 2017, she published a cookbook of the same name.

It was around then that Adjonyoh started to ponder larger issues of diversity and inclusion, but it wasn’t until COVID put her business on pause that she had the bandwidth to cofound Black Book, which connects people of color in hospitality and food media.

Now, Adjonyoh, who hails from the U.K. is bringing her expertise stateside. Last December, she joined the James Beard Foundation (JBF) as director of its women leadership programs. In recent years, the foundation has faced criticism over exclusionary practices. Adjonyoh is among the new hires tasked with building more opportunities for women and other historically marginalized groups. 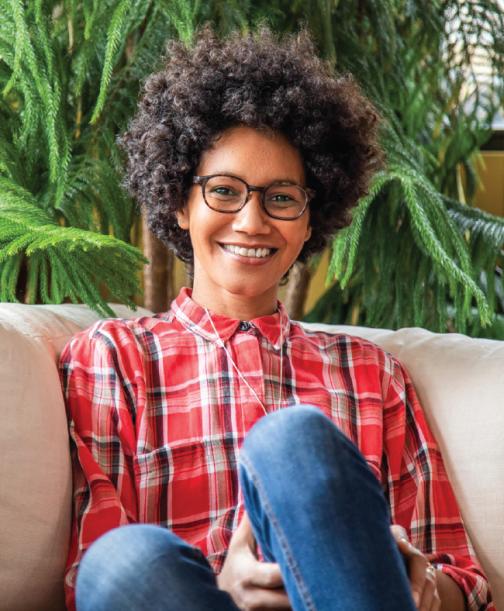 Adjonyoh may have been on the job less than a year, but she’s already making strong strides.

You worked in other fields, including media, before launching Zoe’s Ghana Kitchen. What prompted this shift?

I came into the culinary world later in life and outside the usual routes to it. My entire interaction with the cuisine from Ghana was from a perspective of identity and breaking stereotypes around West African cuisine. There’s a rich plethora of [cuisines] that are undiscovered—and I’d say undiscovered by the white West, unexplored on the main stage of what is considered worthy.

The questions kept changing in the evolution of the business. When it started in 2010, the question was, ‘Why don’t people know about West African food and ingredients?’ Later on, it became, ‘Why am I the only Black person allowed to talk about it, and why are so few Black people in food media?’ And that was something I grew to have a deeper understanding of because I was spending more and more time in the States. There wasn’t a perfect model here either, but there was a lot more visibility of Black chefs, Black food, and platforms and space.

How does your background inform your new role?

I think I have the benefit of being a British person who hasn’t been so tied up in the politics of the last 10 years of James Beard, but I’m still cognizant that there have been some issues around who it recognizes and how it recognizes people.

It seems to me that there’s a wonderful plethora of women-led organizations across the United States who do amazing work from Regarding Her Food to FAB to MAPP (Mentorship, Advocacy, Pandemic Relief, Power of Women) to Just Call Me Chef. There are so many organizations working toward the same goal but not necessarily together. I would like JBF to become an umbrella that encapsulates all those women-led organizations and brings us together so that we can focus on what it is that each one does best.

People forget that the James Beard Foundation is a not-for-profit. We don’t have an endless amount of cash even though I think that what people would want us to do is just dole out cash to various projects and causes.

Obviously we can’t do that, and I’m not even sure that would be an appropriate thing even if we could. However, creating networks is what we can do. We will move much faster together than operating in silos.

What other goals do you hope to achieve at JBF?

I want to scale the impact of what we do. We have really successful programs, and my desire is to scale the Women’s Entrepreneurial Leadership program as quickly as possible by increasing the number of cohorts we can have in a year. For the past five years, only 20 participants on average have gone through it each year. By introducing a winter and spring term, we get to double that immediately. I’ll also be looking to run courses concurrently so that we go from 40 to 80 by running two courses in winter and two in the spring.

Education, connection, and mentorship are sort of the linchpin of the next three years for me. Connection is fostering community, working with—not against —other women-led organizations. Education is what we’re good at. So continuing to build education programs that are holistic in that they are both an exemplar in terms of hospitality leadership for women, but also in areas in and outside of business. Areas where they need to look after their own confidence, their own mental health—all of the other parts that make you a full enough person to be able to go out and lead the charge.

And then redefining mentorship so there’s more understanding that there are peer-to-peer networks around you that you could be leaning on. I think the concept of mentorship is foggy and unclear; people think a mentor has to be someone at the C-suite or somebody who is famous or a celebrity chef or any of those glossy things. Actually, your mentor could be the restaurant owner next door to you who’s just gone through the problem that you are now facing.

You champion DEI across the board, but is there one group that is especially under-represented?

What I do know—because the statistics bear it out—is that the gender parity gap hasn’t shifted very much in 30 years. But worse than that is the condition and situation for Black women in hospitality, and honestly outside hospitality, in terms of their pay and where they get in their careers.

Black women continue to be the most educated, the most qualified, the most experienced, and the most overlooked and the least visible at C-suite and any other management level. Black women have always been behind in the conversation around women, and I think that’s the case universally.

What are you looking forward to in terms of the future of JBF?

I’m excited for the opportunity we have at James Beard right now; it’s had this big overhaul in terms of its thinking, its value system, and its strategy. I’m seeing a wave of energy. I’ve been speaking to the leaders of all these other women-led organizations, and there is a real appetite now for us to come together collectively and do the work in a meaningful way together. I hope in my time in this position I can leave a legacy of some kind in terms of moving the needle. It still hasn’t shifted very much in 50 years, so there’s a lot to do. But there are a lot of great people to do it with.