How One Elevated Restaurant Group is Redefining Seaside Dining

The Prjkt Restaurant Group is well on its way to transforming beach dining along the West Coast.

Alicia Whitney has been underestimated before. She is now the CEO holding the reins of Prjkt Restaurant Group but admits that as a female founder in the male-dominated industry, it’s been challenging at times to claim her place in the restaurant world.

“It’s been difficult to prove myself,” Whitney says. “I think I got looked at a handful of times along the way as not being strong enough, but I put my head down and overcame those challenges.”

Today her California hospitality company is well on its way to transforming beach dining along the West Coast. Over the past five years, Prjkt Restaurant Group has launched various eateries in Bolsa Chica State Beach. And this past April, the group announced a 10-year agreement with the California State Park System to open new beach restaurants and concession businesses on a three-mile stretch of Huntington Beach, which is just south of Bolsa Chica.

Already Prjkt has four new concepts, with additional ones coming down the pipeline. Each has its own signature style and menu, but they are all united in their mission to elevate the typical hot dog and burger stand experience. 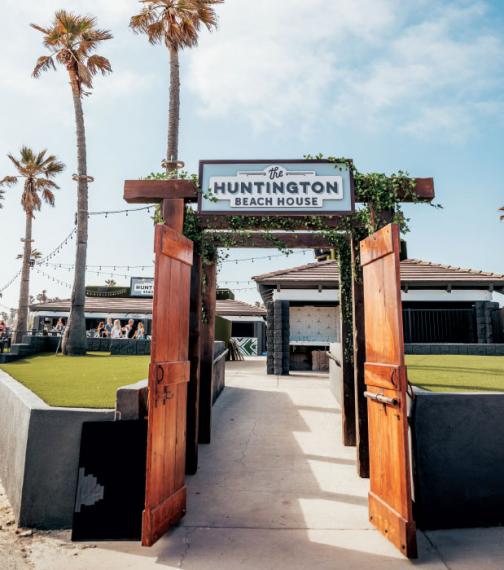 Sahara’s Sandbar, which is named after Whitney’s daughter, sports a ’70s bohemian vibe, with pops of color, mid-century modern fixtures, and servers decked out in retro apparel and rollerskates. The menu includes artisanal pizza, craft beer, and shaved ice.

California Fork & Spoon serves an eclectic mix of dishes, such as al pastor tacos, fried crab, and clam chowder, while a sculpture of the California State bear greets guests at the entrance. In addition to snacks and drinks, the fourth concept, SandBox, incorporates a retail component, with beach must-haves like boogie boards, coolers, and bluetooth available through an oversized vending machine.

“When you get on your bike, which most people do, and go down the coast, you have different offerings every mile or so that give you a different experience,” Whitney says.

Prior to becoming a restaurant owner, Whitney worked in marketing and consulting, with past clients including Station Casinos hotels and resorts in Las Vegas. In fact, she did not create her first restaurant, SeaLegs Wine Bar, until she was pregnant with her daughter. Although the original concept has since closed, it set the groundwork for future restaurants.

Prjkt Restaurant Group’s name comes from Whitney’s admiration for the band MGMT. She liked how they shrunk the acronym for management, and she decided to do the same with the word, project, given how her career has been made of so many different projects.

From the outset, Whitney’s goal was to take recreational beach options to the next level. Building differentiated concepts—rather than reproducing the same one—was vital in pursuing that goal.

“If we created all similar concepts, it wouldn’t really give the end user an experience that we were looking for,” Whitney says. “I like to create concepts that fit the location. If the location doesn’t serve the brand, then my favorite thing to do is to look strategically at what is at the location and then build a concept that benefits the location and the people around it.”

Besides variety, today’s discerning consumers are seeking more elevated dining options—even at places as casual as the beach, Whitney says. Consumers are also interested in pairing meals with experiences, such as line dancing, which SeaLegs at the Beach regularly hosts, in addition to live music and stand-up comedy nights.

“All of these [restaurants] have different ideas and concepts that are unique, that are different from anything that’s ever been there before,” Whitney says. “They’ve been very successful because people were exactly looking for that. They just weren’t looking for your standard ‘go get a hot dog on the beach.’”

Even with the 10-year California State Park System agreement, Whitney is not easing off the gas pedal with Prjkt Restaurant Group’s growth. Her future plans include forging new strategic partnerships in different regions to continue building fresh concepts across California. She is also focused on establishing a consulting company that will help others in conceptualizing, designing, and marketing new restaurants.

Although Prjkt’s concepts are on the beach and therefore al fresco, they still faced setbacks in the face of COVID-19 and had to eat certain expenses. For example, Prjkt had planned expansive outdoor Christmas dinners on the beach, complete with symphony string quartet performances. Days after announcing and securing the event, the beachside restaurants were shut down by the government.

Nevertheless, Prjkt had an edge over other concepts; its locations were accustomed to dealing with the unexpected.

“When you’re on the beach and you do what we do, pivoting is part of everyday work,” Whitney says. “So when it came to having to pivot for COVID, we were prepared and ready for that.”

Even as the pandemic winds down, adaptability and preparedness will continue to guide Prjkt and its expansion strategy. The partnership with California State Park Systems is just another step in the journey of revolutionizing oceanfront experiences.

“I’m very proud to be a female business owner and that we’re spearheading this,” Whitney says. “The impact will be to change the way that concessions are looked at in the California State Park System by amplifying, when you come to visit a state park, the experience you take away with when you go home.”