Opened in May 2016 in a downtown Los Angeles parking lot, Chicas Tacos focuses on organic, locally sourced ingredients to create its own take on tacos and other dishes, including a Mexican-style lasagna with layers of tortillas, cheese, meat, and toppings.

A Pork Crawl Through Los Angeles

Searching for the 'the underbelly' of the city's pork dining scene, we experienced the expansive regionality of dishes in Mexico and Southeast Asia.
February 2017 Alex Dixon

The moronga, or pork blood sausage, arrived in a tray covered with plastic wrap as we rode in a bus down a Los Angeles highway.

I chose one of the massive dark rings off the tray and took a bite, washing it down with a guava Jarritos soda and a bite of tamale all from the plate that was the paper towel on my lap.

The goal of the latest National Pork Board annual pork crawl was to capture “the underbelly” of Los Angeles’ pork dining scene, covering the expansive regionality of dishes in Mexico and Southeast Asia. And pork is not only found in the restaurants around the city, but also at the small specialty vendors and vast markets we visited that produce everything from moronga to pork jerky.

The inaugural pork meal was a visit to The Honey Pig, a Korean barbecue restaurant with tabletop grills where diners can monitor their meats cooking, whether it be spicy pork ribs, pork jowl, shrimp, or a perfectly rendered piece of pork belly. The restaurant surrounds the outsides of the searing dome grill with kimchi and bean sprouts to collect the rendering pork fat and mix with the meats in rice paper with lettuce and various sauces, all before being chased with Soju, a Korean distilled spirit made from rice and barley. Fried rice closes out the meal, as the staff places rice and lettuce directly on the grill, mixing it with the bits of pork, the kimchi and bean sprouts, and the fat. 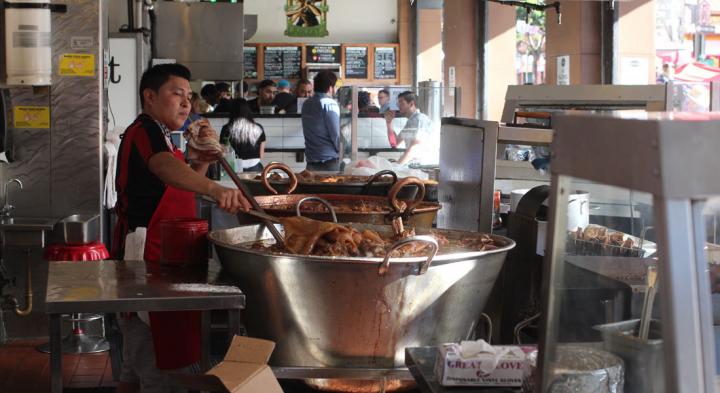 At Villa Moreliana, the kitchen crew cooks almost 300 pounds of carnitas a day in steel drums full of spices and boiling lard.

Led by Chef Jason Alley of Comfort and Pasture restaurants and a new taco venture in Richmond, Virginia, the first day of the pork crawl began with a trip to Northgate Gonzalez Market, a grocer with 40 locations across California and an array of Mexican prepared foods, from sheets of chicharrones to agua frescas and house-made tortillas.

For the last 15 years, Chef Gilberto Cetina’s restaurant—Chichén Itza—has been a stand in the back of the Mercado la Paloma, offering dishes from the Yucatan Peninsula—a mix of Mayan, Spanish, and Lebanese recipes. Some of Cetina’s most popular recipes involve pork, including the cochinita pibil, a traditional Mayan dish of pork rubbed in achiote, wrapped in banana leaves, and pit cooked with hot stones. Cetina marinates the pork with achiote, bitter orange juice, garlic, and several other spices before slowly cooking it until tender and topping it with pickled red onions. And if Chichen Itza’s pork isn’t enough, then nearby Mr. Al Pastor promises an enticing take on its namesake dish with spicy, charred, mesquite-grilled pork shaved from a roasting spit and served in a taco or torta with pineapple, onion, and cilantro.

The nearly 100-year-old Grand Central Market in downtown Los Angeles is home to many food concepts, from vegan ramen to vendors specializing in dried chilies and mole paste. But at the entrance, one particular operation draws you in with giant drums of boiling lard.

At Villa Moreliana, carnitas in the Michoacan style are the specialty of the house, but certainly not the only cut of pork. Whether it’s ribs, skin, tongue, loin, ham, or snout, these cuts are loaded onto tortillas for tacos or put into tortas, burritos, or on a platter with rice and beans. A short walk away from Villa Moreliana is Tacos Tumbras a Tomas, which creates a buche, or pork stomach, torta with avocado and pinto beans. 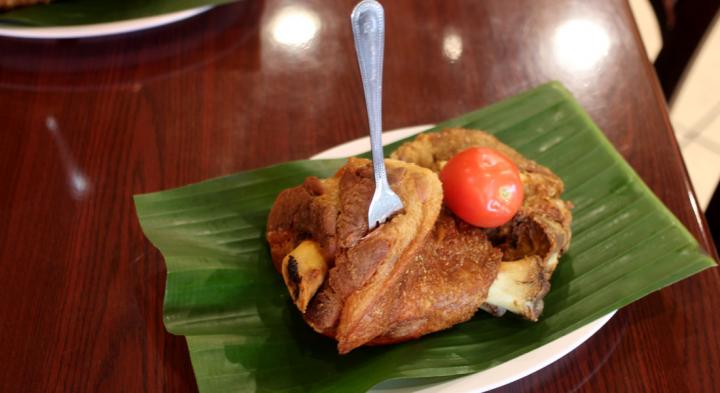 Filipino food and karaoke are the specialties of Kapistahan Grill and the menu includes items like sisig and crispy pata, or deep-fried pork leg (pictured).

Named after a homestyle stew served with rice, beans, and warm tortillas, Guisados has expanded from a single location in Boyle Heights to five restaurants in six years. Braises served on handmade tortillas are the focus of the counter-service restaurant, and for chefs Armando De La Torre Sr. and Armando De La Torre Jr., the motto is “just like mom used to make.”

Just when I thought there couldn’t be any more tacos, there were more tacos, this time from a small taqueria in a parking lot in downtown Los Angeles. Called Chicas Tacos, the restaurant is focused on organic, locally sourced, and free range ingredients and offers a refreshing variety of aguas frescas such as watermelon cinnamon, horchata, and cucumber lime mint. In addition to a variety of tacos, including pork with chicharron and caramelized onions instead of raw, Chicas offers a Mexican-style “lasagna” made with layers of tortillas, pork, and cheese.

Set in a converted auto body shop, Salazar makes the most of the Los Angeles climate with outdoor patio seating and foliage, including cacti, surrounding guests as they eat. By the end of a day full of eating pork, Salazar’s mesquite-grilled Caesar salad provided a nice reprieve, as did its caprese with heirloom tomatoes, fresh burrata, and pumpkin seed pesto. But perhaps there is no better end to an indulgent meal than a Mexican version of the herbal and bitter Italian liqueur Fernet, made from a maceration of plants, roots, and spices including cardamom, cinnamon, and clove. Fernet-Vallet dates back to the 1860s, when Henri Vallet emigrated to Mexico from France during the country’s French colonization period and began crafting elixirs and liqueurs. 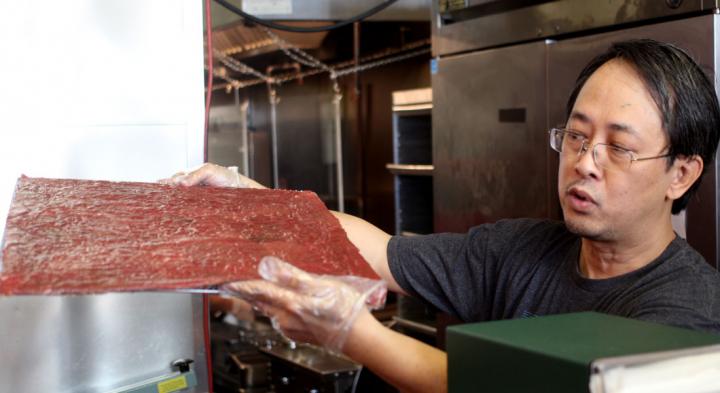 The owner of Fragrant Jerky, known as Mr. Yap, stands with a sheet of marinated, dehydrated pork, which is then smoked and flame-grilled to create bak kwa, or Singaporean-style pork jerky.

For the second day of the crawl, chef and entrepreneur Robert Danhi led attendees on a tour of pork dishes across the region that is his specialty, Southeast Asia.

To get a sense of the range of ingredients used in the many regions of Asian cuisine, from fresh pork blood to fish sauce, one could visit Siêu ThịThuận Phát,or Shun Fat Supermarket. Founded in 1993 in Monterey Park, California, by Hieu Tran, a Chinese-Vietnamese entrepreneur and seafood wholesaler, the market has grown to 15 stores with locations in California, Texas, and Nevada. Stocked items vary by location, and products from Thailand, Vietnam, China, Taiwan, and Japan sit alongside brands from India, Mexico, and the U.S.

Originating in Southern China and developed in Singapore, bak kwa is a jerky popular during Chinese New Year that is made from thin slices of pork that are marinated, dehydrated, smoked, and flame grilled. Los Angeles’ Fragrant Jerky is one of the few shops in the U.S. creating the Singapore-style snack, slicing the meat thinly by hand where it can then be put back together like a pork puzzle.

Fragrant Jerky’s owner, known as Mr. Yap, opened the shop in 2012 as a third-generation bak kwa maker who helped his grandmother prepare it starting when he was 13. Mr. Yap creates several varieties of the salty, smoky, sweet, and slightly spicy delicacy—including original, bacon, and sweet and spicy, which he ships across the country.

Off the west coast of the Malay peninsula lies Penang, a small island known for its street food culture that Danhi considers to have some of the greatest cuisine in the world. This cuisine is the focus at Little Malaysia, where some of the pork-centered dishes include pork satay with peanut sauce, pork fried in tofu sheets or “skin,” and bak kut teh, or pork bone tea, a fragrant, comforting soup made with an array of Chinese medicinal herbs.

For Chef Joan Lam, operating a restaurant wasn’t always her career choice. After immigrating to the U.S. from Myanmar and working in Yoma Myanmar, she eventually took the restaurant over in 2007 and now considers it a calling to introduce customers to the little known Burmese cuisine. Yoma Myanmar offers an expansive menu representing each regional Burmese style, and dishes like the pork curry highlight the many influences of the cuisine including Thai, Chinese, and Indian flavors. Yoma Myanmar’s salads are also popular with guests, including pork ear with preserved eggs and pennywort with roasted nuts.

At Kapistahan Grill, karaoke is as important as the meal. The popular nightlife spot focuses on Filipino dishes, with offerings like sisig—diced pork belly with onion and spices that is cut with the acidity of fresh lemon—and inihaw na lsaw, a Filipino street food made with grilled, marinated pork intestines served with chili-vinegar dip. At Pa-Ord Noodle, the fermenting of sausage provided a nice tang with the richness.

Night + Market Song and Little Sister were the final two stops on the trip and offered modern adaptations in both Southeastern Asian cuisine and decor.

A blend of chopped pork, pork liver, pork blood, and dry spices to create the restaurant’s Larb lanna created a standout among the many Thai street food dishes at Night + Market Song. And the fattiness and saltiness of a grilled pig neck paired perfectly with cold, crisp Thai lagers.

Often, regional cuisine can become muddled at restaurants offering “fusion” takes on dishes or attempting to cover a wide swath of area in a single concept. But these Los Angeles restaurants and shops allow diners to taste the food of the many countries of Southeast Asia and states of Mexico, whether it’s Burmese pennywort salad, Singaporean bak kwa, or Yucatecan cochinita pibil. While pork dish after pork dish may seem excessive, each restaurant and cuisine offered different flavors to contrast with the protein, from the acidic lemon and vinegar on sisig to the soothing herbs in bak kut teh.

Although if you do recreate the Pork Crawl, make sure you bring some Fernet.