Stephane De Baets, an investment banker who became an hotelier, helped develop a fine-dining eatery at the St. Regis Hotel, which sparked his interest in food.

Why inviting leading chefs from around the world is clicking at a New York and Aspen eatery.
May 2017 Gary M. Stern

The Chefs Club is bringing global and domestic culinary talent to prepare meals and offer original recipes at its eateries in New York and Aspen, Colorado. It operates like the James Beard House, the renowned non-profit membership club that invites the best domestic chefs to prepare meals for foodies in New York City. But Chefs Club is open to any patrons, not just members. Some of the notable chefs who have cooked at Chefs Club include Paul Bocuse, Eric Ripert, and Alain Ducasse.

Stephane De Baets, a former investment banker and hotelier turned restaurateur, has fostered a who’s who of established and up-and-coming stars. Chefs Club debuted in Aspen in 2012, expanded to New York City in the SoHo neighborhood in 2014, and debuted a smaller eatery, Chefs Cook Counter, for less expensive meals in New York in 2017. He has his eyes on further growth, both internationally and domestically.

De Baets describes the mission of Chefs Club as a “culinary platform that enables the consumer to touch what we deem as culturally relevant in today’s society, in a fine-dining experience.”

It operates in two forms: Patrons dine on around 30 original recipes prepared by chefs in advance, and also live meals are presented by chefs who are paid travel and lodging expenses, on a weekly basis in New York and less often in Aspen. When chefs aren’t there in person, the menu consists of dishes the staff has chosen; some are based on dishes prepared previously and some that haven’t.

When it first launched as Chefs Club by Food and Wine, it established a relationship with Food & Wine, which organized the Food & Wine Classic in Aspen. It curated Chefs Club menu, connecting it with its “Best New Chefs,” which continued at the New York site. While it still partners with the magazine for certain events, the menu is no longer limited to Food & Wine’s best chefs list.

De Baets, who is Belgian, was an investment banker who became an hotelier, whose life turned when he built the St. Regis Hotel in Aspen. He helped develop a fine-dining eatery at the St. Regis Hotel, which sparked his interest in food, and led him to launch Chefs Club in Aspen.

Prices vary depending on the chef but meals served by the original recipes cost around $80—$90 per person including liquor and around $120 for the meals chefs present in person. Chefs Club’s main eatery in New York seats 100 people, its private dining room for events accommodates 30, 54 seats at Chefs Counter, and 80 patrons in Aspen.

In April 2017, Chefs Club Counter, a fast casual eatery, debuted in a separate space in New York but in proximity to its main restaurant and costs a modest $15 for the average check. De Baets says it enables  “us to touch people from all walks of life,” though he admits its target audience at the more fine dining meals is “foodies. But our goal remains touching the mass market.” 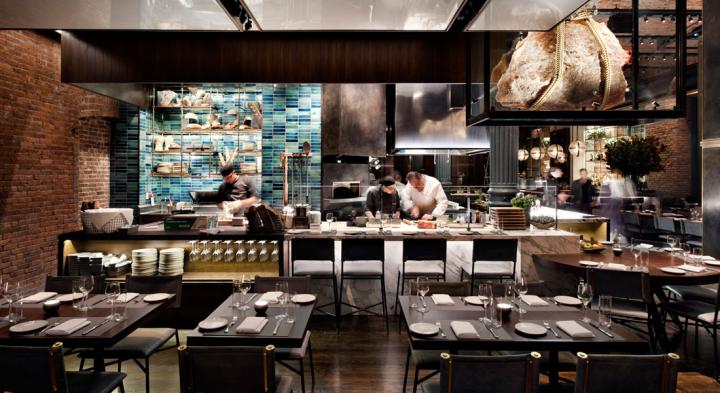 Chefs Club has done no formal advertising but has been relying on word-of-mouth to generate interest.

Criteria for deciding which chefs to invite is determined by what De Baets describes as a “culinary rating team comprised of people from all walks of life.” It tries to balance out choosing “classical chefs with the up and coming, rock ‘n roll independent chefs,” he says.

Why would chefs disrupt their restaurant and transport one or two staff members to New York to cook? De Baets says several factors motivate them, including: “They want to be part of an experience, part of a project, part of a trend to cook in the most influential city in the world. You get to cook for celebrities and relevant people,” he says. While staying in New York, the chefs often dine at the city’s most celebrated cafes, which inspire them as well.

When Didier Elena, the culinary director of Chefs Club, dined at Eventide Oyster Company in Portland, Maine, one summer, he suggested to owner and co-chef Mike Wiley that he participate in Chefs Club. After hearing several positives from a fellow chef, Wiley agreed and brought down a sous chef and chef du cuisine to New York in January 2017 to cook for two nights.

Wiley called the team at Chefs Club “very professional and organized.” Though he’s cooked several times in Boston, Wiley says that cooking in New York—“the big city”—is different. “It was a shot in the arm for my staff as well,” he says. “It was good to feel like we connected with New Yorkers.”

All of Wiley’s team’s hotel and parking costs were covered, as were his food costs. And the trio got to dine at a New York eatery, which was energizing as well.

Chefs Club reimburses chef’s travel and lodging expenses, which may include one or two associates. And when chefs provide their recipes for prepared meals, they are compensated by a minimum guarantee or percentage of sales, whichever is greater.

Some chefs also prepare meals in its private dining rooms. Some guests “wanted food from a particular chef,” he says.

Marketing wise, Chefs Club has done no formal advertising but has been relying on word-of-mouth to generate interest. “The chef community is well aware of Chefs Club experience,” he says. In fact, the low-keyed marketing fits the brand: “We don’t want to be ostentatious. We believe in quality over quantity,” De Baets says

American chefs and European chefs both cook at Chefs Club and offer recipes, underscoring how U.S.-based culinary skills are catching up to those overseas. “It’s a testament to the level of interest the consumer has currently in U.S. based chefs,” De Baets says.

Sometimes the unexpected happens at Chefs Club. When Jowett Yu, a rising star from Hong Kong’s Ho Lee Fook eatery, spent three nights cooking in New York, chef Alain Ducasse showed up to partake of his food. He had just dined at his place in Hong Kong and wanted to taste Yu’s food again.

But De Baets isn’t content to rest on his laurels. He envisions opening a Chefs Club in London, another in Asia (he had worked in Bangkok for 20 years), and another site or two in the U.S.

Soon there may be more Chefs Club proliferating around the world.