Once the company finds the right market, picking the right real estate can make or break the location, founder and CEO John Plew says.

The gastropub plans to double in size over the next 5 years.
April 2019 Rachel Taylor

Gastropub is a word thrown around a lot in the restaurant industry. One quick Google search returns north of 41 million results. Before opening Thirsty Lion, founder and chief executive officer, John Plew, wanted to make sure he knew what a true iteration looked like. He did his research and found a lot of restaurants were opening by the term, but were, in fact, far from it.

“People use the word gastropub, but no one really knows what it is, and, unfortunately, they throw it around now and nobody knows what it is,” Plew says. “I have this passion for what a gastropub is. [After looking up the term] I'm like this is perfect. It described it as a public house serving high-quality food and cocktails and beverage without pretension, because a lot of independent stuff comes with a lot of attitude and I just don't have the time of day for that.”

Craft beer, top-notch food, and local wine are woven into the fabric of the Portland, Oregon, dining scene, and Plew wanted to carry on that tradition at nine-unit Thirsty Lion.

Out of his nine Portland concepts, Plew decided Thirty Lion could be scaled into new markets throughout the Pacific Northwest and beyond. Born out of the area’s eccentric dining scene—“Portland’s very independent, kind of anti-chain,” Plew says—Thirsty Lion’s unique and local feel, interestingly enough, gave rise to a brand with multi-unit potential.

Thirsty Lion started by staying close to home, opening across the West in Arizona and Colorado in 2010.

“It was very well received,” Plew says. “We've been down there for eight years now. We have three stores and we're in the process of building two more. We’ll have five in Phoenix by the end of 2019.”

In Denver, the brand has two locations and is looking for ways to grow further. It opened a second office in Scottsdale, Arizona, and now has the tools to head East, Plew says.

“That was a big geography spread and you have to have the infrastructure,” Plew says. “We have an office in Portland and in Scottsdale and there’s about 50 percent balance. As we scale, we're scaling East and it's a lot easier to fly from Arizona to Colorado and Dallas than it is from Portland.”

Thirsty Lion has been in the Dallas market for almost a year and a half and so far, and is resonating well with consumers. The third venue will open in Warren Buffet’s mixed-use development, Grandscape. A similar two-story location will debut in Chicago later this year.

“It's done really well in Texas,” Plew adds. “It’s another check box of, does it travel and making sure that again, it’s not a trendy thing.”

Although Plew was once happy to be at the helm of multiple concepts, the success of Thirsty Lion has caused him to reevaluate his portfolio. Plew sold seven of his concepts to focus on his blossoming gastropub. 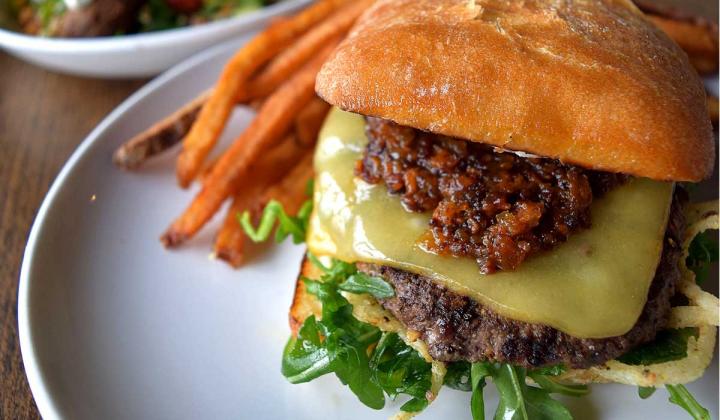 “This is just our growth vehicle right now and why I chose it over my other eight [concepts],” he says. “It's really difficult to be a multi-brand operator. A lot of people are doing it right now, but it's very challenging.”

Two years ago, Plew brought on Marcie Rude as chief development officer to research potential markets and see where the brand could scale. Rude, who previously helped grow P.F. Chang’s from 30 to 150 restaurants, helped define the expansion strategy.

“We’re trying to double the size of the company over the next five years,” Plew says.

That may seem ambitious, but Plew says it’s a sustainable rate of growth—around 28 percent, year over year—compared to some other brands that toss 50 percent targets out there.

Without private-equity firms controlling where they invest and grow, Plew and his partner are mindful of how fast the company is changing.

“We always do it with our capital and we have the means to grow,” he says. “We also have the means to slow down when things aren't good. I think that that's important because once you get into some other situations, they finance you just to grow. They don't finance you to sit on your hands. And so if we see headwinds, we would slow that growth down to navigate it and protect what we've got.”

Once the company finds the right market, picking the right real estate can make or break the location, Plew says.

Due to the size of the restaurant—between indoor, outdoor, and patio seating the average size is about 7,000 square feet—most stores are built from the ground up. Plew is exploring non-traditional spaces as well. The new Dallas restaurant in Grandscape is one example of an ideal development, he says.

And Plew isn’t stuck on opening the restaurant in the heart of new markets. On a recent trip to Atlanta, he explored areas north of the city that would allow Thirsty Lion to cater to suburban crowds, like Alpharetta, instead of just the people who live downtown.

“With Thirsty Lion, I'm bringing urban cool and quality to the masses in the suburbs,” he says.

Plew sees a lot of growth potential in the Southeast, too. Along with Rude, they’ve developed a hub and spoke system. If Thirsty Lion opens in Atlanta that will be a hub, and locations in Raleigh and Charlotte, North Carolina; Nashville, Tennessee; and South Carolina can act as the spokes creating different regions. Plew says, over the next five years, five hubs will open up across the country.

“We're just trying to be a holistic about how we expand,” he says. “With the workforce that's out there we’re trying to pick emerging markets that are up and coming and have really great food, great craft cocktails, and great craft beer, because that's what our brand's about.”

Food (and beer) that fits

During growth, Plew doesn’t want the restaurant to lose its independent feel. Even though the company is transitioning into a national brand, he wants each location to have its own identity. To accomplish this, each restaurant is designed slightly differently and brings in regional flavors on its menu.

The team researches local and regional beers, which primarily make up the 100 options on tap in each location. Local distilleries are also tapped so local spirits can be used in craft cocktails, adding to the uniqueness of each location.

“My underlying decision-making strategy when it comes to food, beverage, and real estate comes down to one word—quality,” Plew says. “If it’s quality then it makes the cut. If it’s not quality then it’s out the window, and I really believe that’s a sustainable model.”

With several menu changes throughout the year, the brand is able to capitalize on fresh and seasonal products.

The globally inspired menu features Asian, Mexican, Mediterranean, and American cuisine. While American dishes make up about 50 percent of the menu, the diversity of the remaining 50 percent allows guests to try something they normally wouldn’t have.

Regional specialties are also developed for new markets. In the Texas locations, guests can order queso. A modern take on pimento cheese is in the works for the Southeastern locations.

Plew has found that the company doesn’t cater to just one type of customer or daypart. From large groups coming in for business lunches to a group of girlfriends catching up with cocktails, the company is busy throughout the day, seven days a week. Brunch is also a focal point for the brand to capture that 25- to 40-year-old age group.

There are different flex spaces in each location that are not exclusively private dining, but can host different events. This is another revenue stream that the company is experimenting with and exploring.

Plew made it clear that Thirsty Lion is not a sports bar, but that doesn’t mean sports are shunned at the restaurant. Computers control lighting and audio throughout the space. If a big game is playing in a specific market, the staff can turn half of the restaurant into a viewing area and seat guests who prefer to not watch the game in a different area.

“We're very mindful of how we program all of our restaurants with the lighting and audio levels,” Plew says. “It's not cheap to do, but it's something I just believe in.”

As the brand grows throughout the country, Plew’s mission remains the same—bringing a true gastropub with high-quality menu and drink offerings to areas without it feeling like a chain or forcing it into a market.

“My mission is to continue to be very selective on high-quality real estate locations and be patient so that you're not forcing growth,” he says.