At Michael Jordan’s Restaurant in Oak Brook, Illinois, more than 100 photos of the NBA legend hang on the walls.

His Airness' latest restaurant is a concept capable of serving all dayparts, in every setting.
January 2018 Danny Klein

When Cornerstone Restaurant Group, the team behind Michael Jordan’s namesake restaurant, scouted Oak Brook 22 as a possible landing spot for his Airness’ first suburban location, the non-traditional locale presented a set of challenges—and one intriguing opportunity to fix them. Located on the first floor of an office building across from Oakbrook Mall in Illinois, Josh Zadikoff, brand operations manager for the group, recognized the difference between business and on-street traffic potential. There was a small cafeteria in the building for tenants to grab breakfast or lunch on the go. But would they come and sit down for lunch, too?

“Having a $14–$15 lunch is not something that everybody does every day,” he says. “But all the fast casuals—Subway, Potbelly, and so on—we wanted to be in that conversation, and be the deciding factor for people. We wanted to have those healthy options; salads, soups; and have that rotating culinary approach be visible throughout mixed dayparts.”

The full-service restaurant, meanwhile, features a 150-seat dining room and 90-seat bar, and began serving lunch and dinner right on July 17. DMAC Architecture built the space, highlighted by a 68-seat outdoor patio, multiple private dining rooms, and 100-plus photos of the basketball legend. The space was ideally designed for office gatherings, from work lunches to meetings to happy hours. The counter-service add-on filled in the gaps.

Cornerstone didn’t debut its Coffee Bar & Market right away, instead electing to give the full-service concept some time to work through operational kinks. 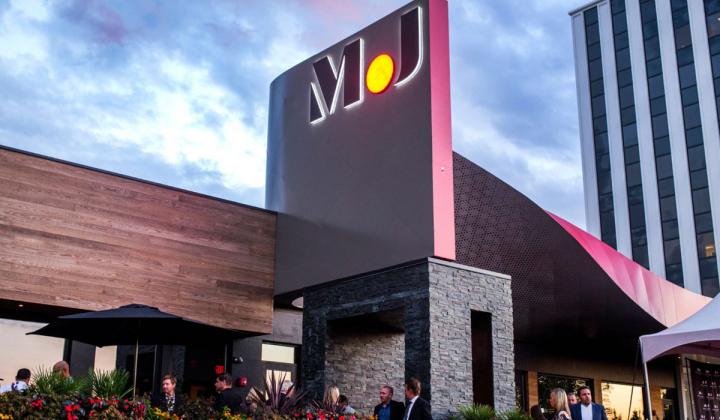 “Logistically, we wanted to get in the groove of a full-service operation,” Zadikoff says.“And get as much of our operational legs under us. Because as much as the concept is an extension of the restaurant, it is a completely separate operation on its own as well. And it needs to be treated like that. We didn’t want to overburden ourselves. We wanted to make sure what we’re executing is on point and what we set out to do.”

About two weeks after opening the full-service Michael Jordan’s Restaurant, Cornerstone revealed its Coffee Bar & Market. There were some immediate issues to address. For starters, the last thing Michael Jordan’s wanted was for guests to pick between the two.

“We want to double up the frequency of them visiting us, not cannibalize it,” he says.

Cornerstone did this by being very specific about price points, as well as the type of food offered. While some ingredients are shared, helping reduce food waste, you can’t get a pared down version of a Michael Jordan’s Restaurant menu item at the Coffee Bar & Market. The dynamics and crowds they serve are separate.

“We said, ‘Hey, this will be a good challenge. How can we do this for coffee, breakfast pastries, sandwiches, lunch, and grab and go in that realm, and still fulfill that need for office tenants, and it doesn’t compete with our own restaurant business?” Zadikoff says.

Operationally, the food comes from the same kitchen. The team that preps for the restaurant is the same for the Coffee Bar & Market. The ingredients are the same as well, although the dishes are not. For example, brisket used the restaurant can turn into a sandwich. Or grilled chicken could morph into a salad, and so on. “It’s a great cross utilization of product but still being able o differentiate it,” he says.

“It’s the same high-quality produce, but maybe just different proteins and garnishes that we’re using in the grab-and-go salad as opposed to the restaurant. Again, we never want to cannibalize our own operation,” Zadikoff adds.“We’re not putting out the same product because they’re in very different price points; portions are different, and the menus are different altogether.” 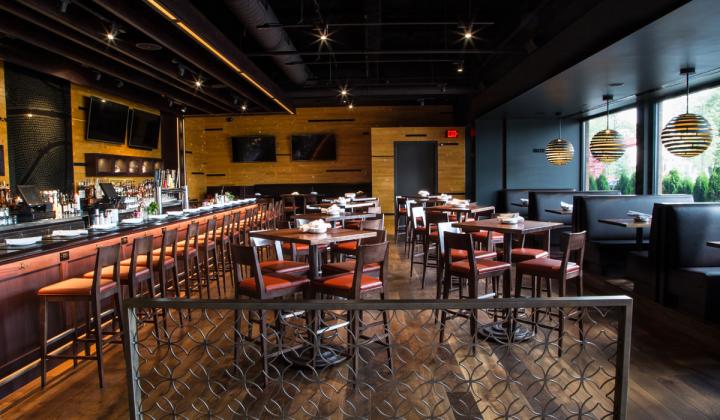 The 90-seat bar area at Michael Jordan’s Restaurant helps it appeal to sports fans, late-night eaters, and guests who want to dine without waiting for a table to open.

But of course there are places the concepts unite. Chef Craig Cooper helms both menus and works with his team to find unique ways to make the concepts operationally efficient—a challenge considering the Coffee Bar & Market doesn’t source a ton of products specific to its operation. And, without question, the concept, placed strategically on the walking path of office dwellers, is a powerful marketing tool for the full-service space.

When people walk down the hallway to their office, they see the concept with its Michael Jordan’s branding. “It is a nice way to represent ourselves and get people interested in what we’re doing in general,” Zadikoff says. “It’s a taste of what we do in the restaurant in a sense.”

Zadikoff says the team has been pleased with traffic returns so far, and continue to evolve the grab-and-go offerings based on customer feedback. The rotating soups, for instance, have been a hit. “We sell out most days of products in a positive way. We’re not saying no to many people at the end of the afternoon. I think we’ve found our groove in production and with what guests want to see,” he says.

“I always like to hit it home that MJ’s stands for greatness and the pursuit of excellence, and that’s the ethos for everything we do in every one of our locations,” he says.