Inspired by her homeland and her mother’s recipes, Azhar Hashem brings forth the diversity of the eastern Mediterranean.
December 2017 Alex Dixon

Azhar Hashem has always been a disrupter.

Prior to opening a Mediterranean restaurant in San Francisco, Hashem had a career in marketing at Google that focused on disruptive products and ideas, from the launch of the Chrome browser to Google Fiber. Originally from Jordan, Hashem has a passion for the food of the region—an area that she says has largely been misunderstood in America through a political lens. Similarly, the cuisine has often been reduced to specific items like tabbouleh or hummus while ignoring much of its diversity.

In June 2016, Hashem—needing a break from the technology sector—opened Tawla as an outlet for her passion, and as a way to change the misperceptions surrounding Mediterranean food and culinary traditions. “I wanted to start a restaurant that presents people with an alternative to the region; we want to show people the sides of cuisine that are more nuanced and sophisticated and laden with history,” Hashem says. “We want to allow people to dig deeper and understand where that history is coming from, to get re-interested in the region from a human and cultural perspective rather than a tainted political view.”

In designing a menu for the restaurant, Hashem didn’t have to look far. Her mother’s cooking inspired roughly 60 percent of the offerings, which Chef Joseph Magidow then puts his own spin on. The Minnesota native, who has trained in French and Italian cuisine, spent time with Hashem’s mother, learning about the food, history, and culture in the process. 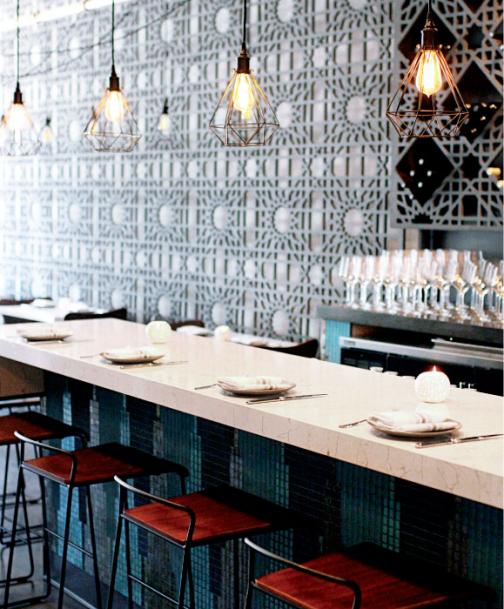 The restaurant’s name is the Arabic word for backgammon, a game shared among many countries east of the Mediterranean region. California shares a similar climate, and Tawla takes advantage of the state’s robust bounty. Dishes like the Samakeh Harrah with a spicy walnut stuffing and fig leaves share all the characteristics of the traditional dish, but with whole California rockfish instead of grey mullet.

Hashem says Tawla avoids using the term “authenticity” as it has a unique meaning to every individual. “We talk about it being true to origin rather than authentic, because authenticity is a farce in many ways,” she says. “It’s risk-taking food and it really leans into the flavors, but we do take liberty in adjusting some recipes to ensure we take advantage of local produce, local fish, and meat that we wouldn’t be getting in the eastern Mediterranean and vice versa.”

The restaurant’s customer base is diverse, ranging from Mediterranean cuisine novices to those like Hashem who hail from the area. She views ethnic cuisine adoption on a three-tiered scale: Level one takes aspects of the cuisine from a wide geographical area and brings them to the U.S; level two evolves past the cursory interpretation; and level three pursues more depth in originality.

Hashem says cuisines like Italian have reached the upper levels in San Francisco, where diners can sample cuisines from Puglia and Piemonte. But eastern Mediterranean hasn’t yet peaked in the city. Hashem points to restaurants in other cities such as Boston that are advancing the cuisine.

“Diners come in expecting the tabbouleh and hummus, and we tell them we don’t have that. Not that we don’t like it, but that’s street food, and we’re focused on the lesser-known edibles that exist in the region,” she says. “We reintroduce them to the food.”

The menu includes experiences like Teta’s Table and Summertime Feast, which give diners the chance to taste multiple dishes in a shared table setting. The curated menu features wines from across the Mediterranean in addition to a focused section of acclaimed wines from the Lebanese winery Chateau Musar in the Bekaa Valley.

Opening a restaurant was something that Hashem says her college education and work in technology did not necessarily prepare her for, so she made a point to surround herself with mentors and learn more about the industry. She also hopes to put her previous experience and workplace practices to use in addressing social issues that go beyond the typical scope of restaurants, namely the continued rise in the cost to live and commute in the greater San Francisco area.

“There’s no longevity in the restaurant industry, and there’s a reason a lot of people are leaving it,” she says. “If they plan to do this until they retire and then have no money when they do, is there really a path toward retirement? We need think about all of these problems, not just as a business, but as an industry.”

As Tawla grows past its first year, Hashem aims to build employee benefits: paying staff 20–30 percent above minimum wage; granting access to free, healthcare; and more. Tawla subsidizes commuting expenses and covers the cost of all meals employees eat while at work. The restaurant also implements a 20 percent service charge that is added to employees’ base pay.

“We give them as much as possible to take home,” Hashem says. “It doesn’t solve their problems of having multiple jobs … but hopefully we get better in the next three years and can offer them a job that will be their only job, and we can offer them a decent, dignified life.”