LoKal encourages guests to share a beer with their best friend.

Stephen Ochs was tired of meeting friends for dinner and then dashing home to walk his dog. So he came up with a rather straightforward solution. Why pick one or the other if you can have both?

This fall in Atlanta, he will open a concept that includes a full-service eatery, a full bar and Fetch Park, an on-site dog park bar.

“I wanted to give people a chance to hang out with their friends and their four-legged friend,” says Ochs, whose business partner is former Atlanta Falcons NFL player Garrett Reynolds.

The restaurant will be similar to a Texas-style icehouse—a pre-modular steel building with around six garage doors, offering views of the dog park and patio. (An icehouse was originally a place to keep ice but now in Texas it signifies a bar.) Inside there will be a bar and seating. It will be rustic, featuring stained wood wall paneling and furniture made from used bourbon barrels. There will also be a large patio—probably around 4,000 square feet, similar in size to the interior—containing a shipping container that will serve as a bar with rooftop seating 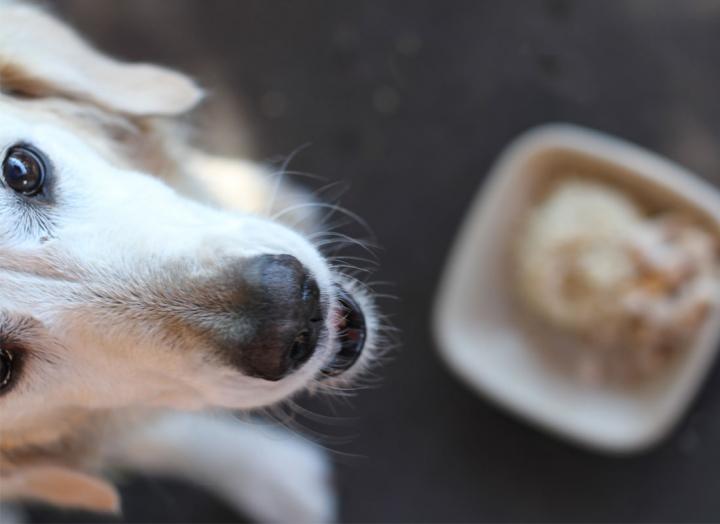 Happy dogs like this one have been welcome at Lazy Dog since it opened its first location in 2003.

As for the food, Ochs is keeping it mostly under wraps but says it will have a Texan twist.

Outside, there will be a large outdoor area, which will contain a 1976 Airstream turned into a bar (for a total of three), as well as a dog park—almost an acre in size. The full restaurant menu will be served at the bar, which will have seating, and other seats will be scattered through the dog park.

Ochs will offer membership to the dog park ($20 per month) with the goal of forcing owners to sign a waiver so they are accountable if their dogs get into fights or other problems. “It will be a place to go where you don’t have to worry about your dog,” he says.

Ochs expects most revenue to come from the restaurant. Most of the membership dues will be reinvested into the dog park to keep it in good shape. 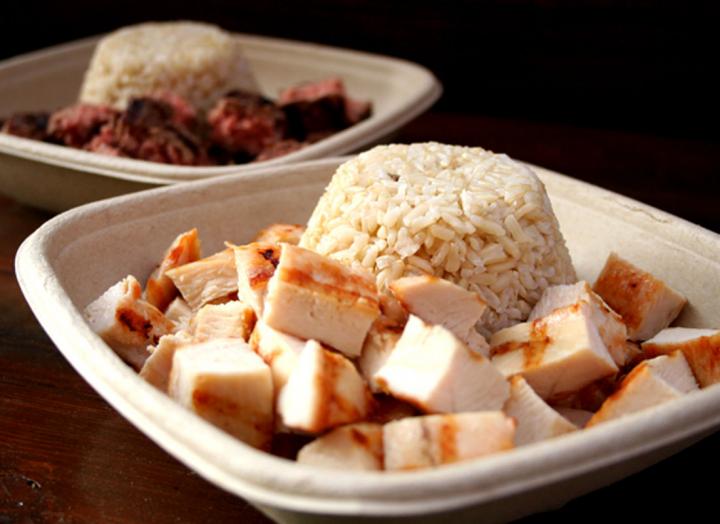 Each pup gets a complimentary bowl of water and there’s a small doggy menu of three items at Lazy Dog.

There’s nothing exactly like this in Atlanta, says Ochs, and perhaps not across the U.S. In Seattle, there’s Dogwood Play Park, which offers booze and some light snacks. And two Brooklynites are hoping to open BYOD (Bring Your Own Dog) restaurant in the New York borough, to appeal to dog owners.

In Michigan, it’s expected that a bill will soon be passed allowing residents to bring their dogs onto restaurant patios, with conditions, including the dog doesn’t eat from the table—which you’d hope is common sense to any pooch-owner. Meanwhile, Georgetown, Texas, recently decided it was OK for dog owners to bring their pups to dinner too—restaurants here have to apply for a permit, which takes about a week to approve.

Lazy Dog, a chain of 22 restaurants in California, Las Vegas, and Texas, and headquartered in Huntington Beach, California, has allowed dogs since it opened its first location in that town in 2003. 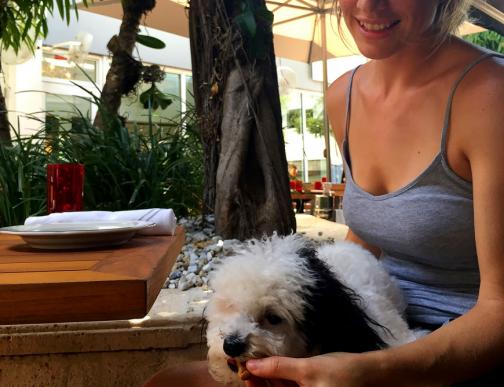 Dogs are a nice addition to the patio at Michael’s Genuine Food & Drink in Miami.

There are rules, and these are posted on Lazy Dog’s website. These include: Dogs must stay on the ground; and they can’t eat from a human’s plate.

But dogs don’t suffer here. Each pup gets a complimentary bowl of water and there’s a small doggy menu of three items: a grilled hamburger patty with brown rice ($4.95); grilled chicken breast and brown rice ($4.95) or plain brown rice ($1.95). About a third of people on the patio order something for their dog, says spokeswoman Laura Hansen. But, she says, “That’s not where we’re making our money; it’s a tack-on but it’s more about the amenity.”

At the end of every day, the Lazy Dog staff does an extra deep cleaning on the patio, just in case there have been any accidents, but beyond that, the canines are no extra work, Hansen says.

That’s true at Michael’s Genuine Food & Drink in Miami, too, where dogs are a nice addition to the restaurant, says general manager Nicole Kelly.

“It brings a nice atmosphere. On Sunday brunch it’s really fun to walk around the courtyard, which is filled with babies and puppies.” 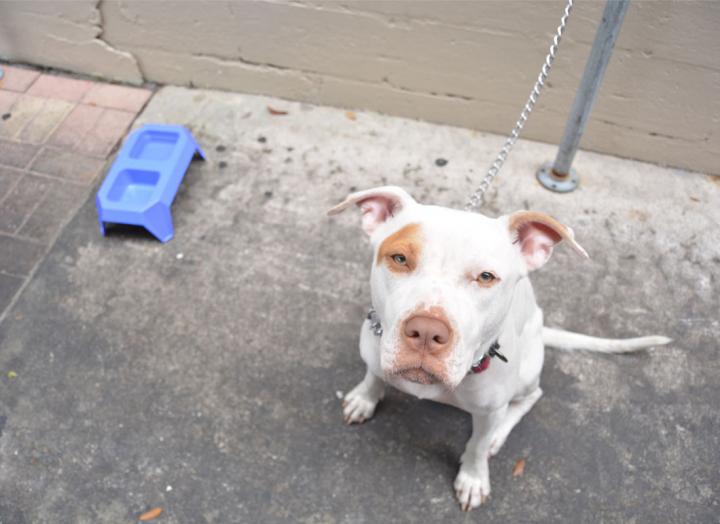 LoKal has helped find homes for more than 20 rescues.

The restaurant provides free organic peanut butter cookies for every pooch, along with a bowl of water.

There have been no issues with the dogs, Kelly says. “We do place people carefully if they have a big dog, like we do if people have a stroller—to the side.”

Even before the restaurant opened, during its construction period, the owners left homemade doggy biscuits out front for hungry pooches.

“Coconut Grove is a huge dog community and we are near a vet so I wanted the sick dogs to feel welcome,” says owner Matt Kuscher.

He also holds dog-focused events, to help local shelters, for example, at LoKal and has helped find homes for more than 20 rescues. 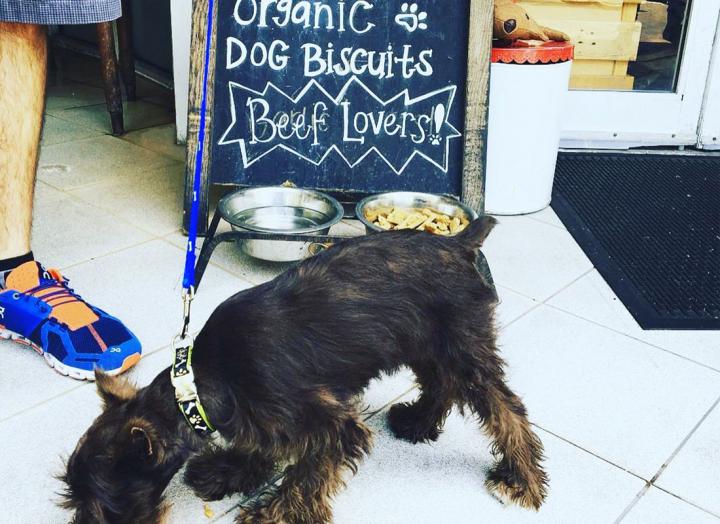 Dogs are only allowed on LoKal’s patio and must be kept on a leash.

The restaurant offers two entrees for dogs—Marmaduke’s meatloaf and Yeyo’s chicken and rice (both $5)—and Kuscher says most dog owners buy one. “It’s a great deal—they even get a [dog] breath mint at the end. He sells about 10 a day.

LoKal also serves Yeyo's No Bullshit Brown Ale, so even puppies can feel they’re able to have a drink. This is made from beef broth and named after Kuscher’s pooch, Yeyo. All dogs—dining in or just walking by—also get free homemade doggy biscuits, baked fresh daily.

All doggy dishes are hand washed so they don’t go through the dishwasher with human tableware.

Kuscher loves catering to dogs. “It won’t make us rich but that's not the point. Our goal is invite the dog community in and let them know we welcome their four-legged friends. Also remember, when they bring their dogs they are also eating and drinking.”