The Chop & Chick, a giant Iowa pork rib chop marinated in tangy pesto sauce, and served with two eggs. The dish was featured on "Best Thing I Ever Ate."

Matt Pool opened his 24-seat restaurant in an 800-square-foot building. That’s not referring to the dining room, but the entire building, kitchen included. Guests who wanted to use the bathroom had to walk into the adjacent hotel. In the heat of a Phoenix summer, a shaky air conditioner didn’t provide much relief. But that didn’t stop the lines from forming, morning after morning.

“We developed pretty quickly a really loyal local following,” Pool says. “We got to be known for these waits. Even when it was summer and hot outside, people still were waiting to get in.”

The first Matt’s Big Breakfast arrived 2004 in downtown Phoenix. Pool and his wife, Erenia Lara, spent the next decade maturing the brand, built on a simple tenet—elevating breakfast through from-scratch cooking and hospitable service—before thinking about expansion. And their first foray into growth turned out to be a game-changer.

Currently, there are three additional restaurants: Biltmore Plaza, Tempe Marina Heights, and Sky Harbor Terminal 4 in Phoenix’s international airport, which was the first Matt’s Big Breakfast to open outside of the original in 2014.

The licensed unit, where Pool’s team is responsible for training staff employed by SSP America, proved Matt’s Big Breakfast could expand, and expand along a path many local-run operators scoff at—franchising. And often times, the pause is for good reason. Like owner-built concepts around the country, Matt’s Big Breakfast was more than a business endeavor meant to fill its creator’s pockets. Pool was a paralegal for a law firm in Washington, D.C., but couldn’t let go of his restaurant ties. He worked at Houston’s on the side, and then helped out at his sister’s restaurant when he moved back to Arizona. Pool grew up going to American diners in Kansas City, Missouri, with his father, and could see a hole in his local market for such a concept, and an opportunity to reroute his life. The couple had a young son and didn’t want to miss Little League or events at school.

The idea of handing off a passion-fueled concept to franchisees, with his name on the front no less, wasn’t really something that crossed Pool’s mind. He didn’t have a negative view necessarily, he says, it just didn’t seem like a fit.

"Our goal is doing a few things exceptionally well, and just kind of the old-fashioned way. What makes us different isn’t revolutionary." — Matt Pool, founder of Matt's Big Breakfast. 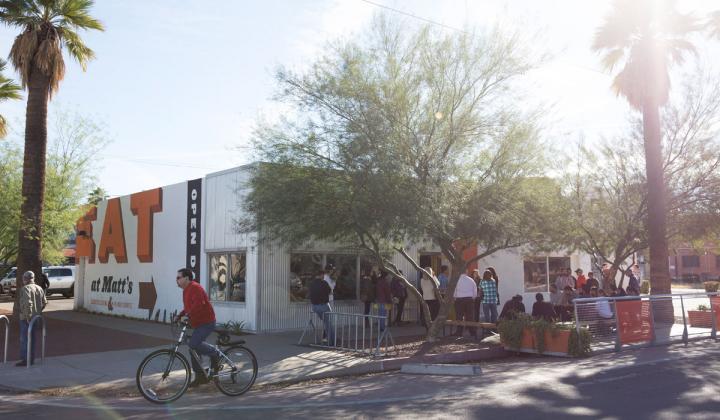 Matt’s Big Breakfast has no freezers. No microwaves. The orange juice is squeezed by hand. It’s an operation run under a steady eye.

What shifted his perspective, however, was the resounding success of the airport store. The restaurant earned national recognition as the top “Best Chef-Driven, Local or Regional Restaurant” from Airport Revenue News in 2017. And it wasn’t just the accolades that flipped the franchising bulb on.

“We were able to do that with a level of success we really never thought possible,” he says. “We realized that was another way to grow our brand regionally without having to actually open the stores ourselves.”

“Franchising is a broad category. You can do it really well, with very deliberate, controlled growth and being really hands on, and being focused like we are now on our ingredients and our level of service, or you can just try to open up hundreds of them and just roll them out there,” he adds. “That isn’t really what we’re trying to do.”

The Biltmore Plaza and Tempe Marina Heights units both hit the marketplace in 2016 as company-run stores. Franchise expansion into new markets and states is up next.

Pool says they’re not limiting themselves to those states. Yet they also don’t want to split the map, say one in Ohio and one in Florida, since it would stress the system too much.

In the next two to three years, Pool sees five to 10 units, not 50–100. Picking the operator right now is more important than putting pins in a map. He hopes to open one restaurant in a market, gauge the success, and then fill out the area with the same partner. Pool doesn’t want five operators running five restaurants in the same city.

“Our ideal operator is an owner-operator who has a similar deal as us, who is focused on opening this location and having a life outside of work. They’re not looking to open up just to make money,” Pool says. “It’s to build a lifestyle around the brand.”

He adds that the airport location does have menu items to accommodate afternoon guests, and there could be a fit for such a restaurant if need be. The typical spot, though, is open from 6:30 a.m. to 2:30 p.m. The projected investment for a Matt’s Big Breakfast is between $372,000–$690,160. That includes an initial fee of $40,000. The brand features a royalty fee equal to 6 percent of gross revenues, as well as a requirement to spend a minimum of 0.5 percent of gross sales per month on local marketing, and a contribution up to 1 percent of gross revenues into a systemwide marketing fund. (Read more about the process here).

How you find these ideal operators beyond the capital requirements is a nuanced question, Pool says. They put some unconventional questions on the franchise application to unearth like-minded restaurant owners. “We’ll ask them where do you like to eat? What do you like to cook? It’s a way to kind of discover if people really want to open a concept focused on ingredients,” Pool says. 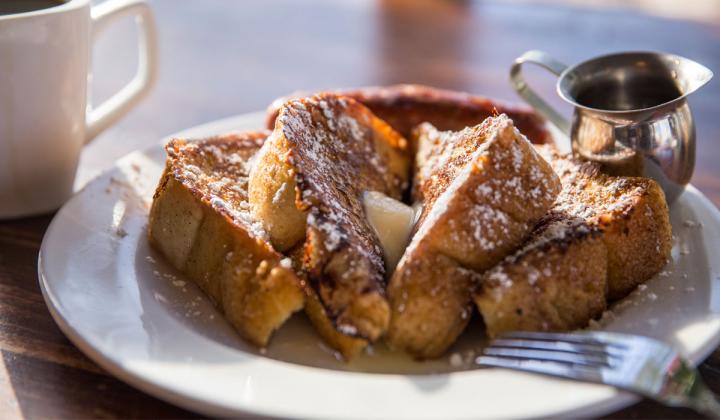 No microwaves. No freezers. Ingredients first, no matter the dish or the location.

It’s this laser focus on quality that lured Guy Fieri and Food Network in 2008.

Fieri and his crew rolled up to the restaurant in “Diners, Drive-Ins and Dives’” first season. Pool says they clocked two 11-hour days to film a segment that ran some 5 minutes and 33 seconds.

It could have been a curse not a blessing, Pool adds, if new diners showed up and felt let down. That didn’t turn out to be the case, however. New guests arrived and became loyal ones, especially locals who hadn’t heard about the brand before. “It’s the gift that keeps on giving because it keeps airing,” Pool says. “It was on as recently as last week.”

Fieri also shouted out Matt’s Big Breakfast on the show “Best Thing I ever Ate,” when he gave props to the Chop & Chick, a giant Iowa pork rib chop marinated in tangy pesto sauce, and served with two eggs. Fieri included the brand in his best-selling book “More Diners, Drive-Ins and Dives” as well.

As busy as Matt’s Big Breakfast was then, the bar has been raised over the years. The downtown location will do between 500–700 covers in a 65-seat restaurant on the weekends. They’ll turn tables eight or nine times before 2:30. Check averages run $11–$14.

“Once they’re seated their food comes out, especially considering we’re cooking it from scratch, really efficiently. I think that’s why people still do wait to come in, because they know once they get in they’re not going to continue to wait and wait,” Pool says. “We create your table within seconds. We get your drinks to you. We get your order in and you’ll have your food in 10 minutes.”

Breakfast is a category Pool sees as a rock-solid investment for years to come. Even during the recession, customers came to eat in the mornings since it was a low-cost entry for dining out compared to other dayparts. It’s also quicker, which is not a quality in danger of losing steam during this convenience-fueled era. Not to mention the brunch boom.

“People, especially at breakfast, come because they like seeing familiar, friendly faces. Our goal is not to open cookie-cutter restaurants, it’s really to open up and replicate what we’ve done at the local level here in other markets by just getting to know your customers,” Pool says. “Warm, friendly, and genuine service, which for us isn’t a catchphrase. It really is how we built our business.” 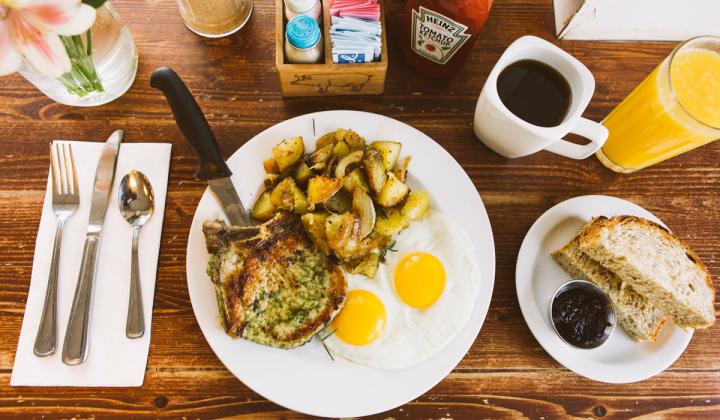 Made-from-scratch breakfast might not seem revolutionary, but it's been the key to the brand's success.

“We have loyal regulars who have come in every day for 14 years,” he adds. “It’s a bit different than some lunch or dinner place that you might hit up once or twice a month.”

Pool says he’s often surprised by how simple and effective the model is, and why more restaurants aren’t executing it. They make pancake batter by hand with King Arthur Flour, real butter. No mixes. There’s just one pancake flavor, but it comes with real Vermont maple syrup.

“You don’t read our menu and think, ‘Wow, this has so many things on there I’ve never seen before,’” he says. “Our goal is doing a few things exceptionally well, and just kind of the old-fashioned way. What makes us different isn’t revolutionary.”