From burgers to mac and cheese, guests can choose exactly what they want, says Paul Motenko, president and CEO of Stacked Restaurants.

Over the next five years, Stacked expects to open at least 15 new locations.
March 2019 Rachel Taylor

Since Chipotle arrived on the scene, customization has become a major factor in the fast-casual and quick-service industry. However, in the full-service space, it hasn’t caught on quite as quickly. Chefs craft menus from carefully selected ingredients, and a substitution could throw off the flavor of a dish.

Stacked, though, is disrupting the status quo. The California-based company, which started in 2011, offers a fully customizable menu. From burgers to mac and cheese, guests can choose exactly what they want, says Paul Motenko, president and CEO of Stacked Restaurants.

“The fundamental difference of Stacked, and what is so unique about it, is with a multi-menu category menu in a full-service environment, we have a level of customization that is unheard of in the restaurant business,” Motenko says. “I don't know of any other restaurant that has that level of customization where guests can get exactly what they want by choosing their favorite ingredients to create their own personal masterpiece.”

The guest experience while customizing a meal at Stacked is also unique. Instead of giving a server a list of ingredients they would like to see topping their burger, guests build meals using an iPad at their table.

Motenko says more than half of Stacked’s guests start from scratch—or “Stack Their Own”—and about 90 percent modify a dish in some way.

“We really feel we've tapped into something that's very, very much desired out there: people getting what they want,” he says. “It’s not necessarily easy to do, but it's certainly a very noble cause and worthwhile, and appreciated by our guests.”

Over the past eight years, the team at Stacked streamlined operations to handle the level of customization it promises. Growth was slow and steady for the chain, which has five locations stretching from Thousand Oaks, north of Los Angeles, all the way to San Diego.

“The challenge with customization is execution,” Motenko says. “Because every meal is its own very special thing. Everything about stacked, the way we operate all our systems and procedures, are geared toward executing very well with this intense customization.”

Stacked is now ready for its next phase of growth. In January, it brought on an industry veteran to help expand in and out of California. The chain named Craig Carlyle its first chief operating officer. Over the past 20 years, Carlyle played an important role in the growth of Yard House, and served as president following its $585 million acquisition by Darden in 2012.

And he joined the team just in time as it prepares to break into another state—Texas.

The difference in labor will also help with the brand’s operating costs. A $12 minimum wage in California versus a $2.13 tip credit employee in Texas is a game changer, Montenko says.

“We want to head to Texas next and then do select restaurants in California with great sights, great economics, etc.,” he says. “But then moving to Texas and then other tip credit states where the pressure of labor costs isn’t quite as great.”

Motenko has had success with other restaurant brands, like BJ’s, in Texas, and feels Stacked will thrive in the market.

“That was one of the first states we went into after California [with BJ’s] and did extremely well. We love the people of Texas. It's a great market,” he says. “They really appreciate good food and they’re incredibly nice, hospitable people as well.”

Innovation and development are high priorities. “The day you stop trying to improve is the day you should probably get out of the business,” Motenko says. The innovation will continue as the company moves into new markets. New locations will feature Stacked’s original menu along with some Texan favorites. 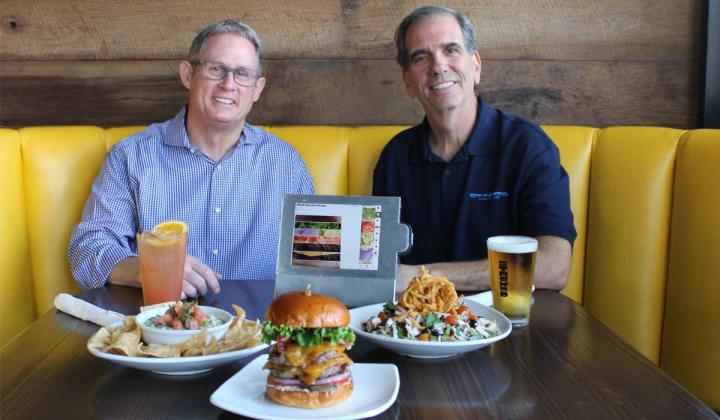 The team at Stacked is testing the idea of adding some local flavor at its Texas locations.

“We can let our guests decide what it is that they like, and certainly for Texas we might add some ingredients that are things people in Texas seem to really love,” Motenko says. “We might tweak some of our signature items, but for the most part we’ll have the ingredients that people enjoy them and let them put it together in combinations that they really appreciate.”

Between the two states, growth will steadily increase over the next few years. The company hopes to open one to two new units in 2019, followed by three to four in 2020. Over the next five years, Motenko expects to have 15 additional company-owned restaurants in the footprint.

At the moment, the company’s growth will be strictly with company-owned units. Down the road, Stacked could become a franchise, but that’s in the distant future, Motenko says.

“BJ's and Yard House were definitely not franchisable,” he says. “We believe Stacked is potentially franchisable, but that's a decision down the line.”

Motenko believes the unique customization systems of Stacked will fit well in a number of markets in California and Texas.

“We are a full-service restaurant that allows the guest to be in charge of their own experience,” Carlyle says. “They dictate how it goes. While I think in other concepts they’re getting what they want, this allows them to create their own. And it really kind of personalizes their experience.”

As the company preps for expansion, Carlyle was brought on to support the process.

“A big impetus toward bringing Craig to our company was to make sure that our operations were in as good of shape as possible as we start to grow again,” Motenko says. “Craig's incredible experience over his career is exactly what we we’re looking for. Someone who really is an operator who knows how to teach people, how to motivate them to constantly improve, and we could not be more excited than having someone like Craig on board as we go into our next stage of development.”

“One of the most rewarding things that I've experienced in my career has been the opportunity to provide growth through people and to influence their growth and their lives in a positive way,” Carlyle adds. “It's a really, really exciting time to be with the company when we've just secured private equity partners and funding for growth and looks to be a very, very bright future ahead of us.”

Guests have responded well to the concept. Being able to have a visual of what’s going to show up on their plate is satisfying. Guests can also control when they order and when they pay, adding to the overall personalized experience.

Stacked’s popularity on social media also contributes to guests returning to the company and creating a conversation outside of the restaurant. The buzz is built around guests sharing their crazy creations while dining at Stacked.

“Until you’ve had your own favorite, customized mac and cheese, you have really not lived,” Motenko says.

Is the SPAC Revolution Here to Stay?
The Restaurant Industry's Recovery Swings Into Full Gear
Cheesecake Factory to Reacquire Majority of Roark's Stake for $457M