Bryan Mroczka, head pitmaster at Sonny’s BBQ, says that becoming a pitmaster requires taking an intensive program that teaches specific skills. He has the trophies to prove it.

Can a Barbecue Chain Ever Rule America's Dining Scene?

Despite rabid followings and iconic branding, it has been difficult, if not impossible, for barbecue chains to expand nationally. Will that ever change?
January 2018 Gary M. Stern

By the end of 2016, McDonald’s had amassed 36,900 retail shops globally, Burger King 15,738 outlets, and Pizza Hut 11,000 eateries. While burger and pizza chains have expanded exponentially, consider some of the largest barbecue chains in the U.S.: Famous Dave’s of America had 170 locations in 34 states, mostly in Florida and the South, and Sonny’s BBQ had 112 eateries in nine states. But few barbecue eateries have blossomed into national chains. Why not?

Why can’t barbecue joints make the leap to national powerhouses the way that burger and pizza chains have? Is it that barbecue cooking requires so much intense preparation that it can’t replicate, like mass producing burgers?

READ MORE: These are five of the best barbecue joints in America.

Barbecue enthusiasts are comparable to fans of Bruce Springsteen or the Grateful Dead. They love their barbecue; they drive miles for it to wait on long lines; and they keep coming back for more. So aficionados gravitate toward Joe’s Kansas City Bar B-Que, Stanley’s Famous Pit Barbecue in Tyler, Texas, Eli’s BBQ in Cincinnati, Ohio, The Salt Lick in Driftwood, Texas, and Dinosaur Bar-B-Que in Syracuse, New York, to name a few.

These classic barbecue joints have expanded, but often modestly. There are three Joe’s Kansas City, six Eli’s BBQ, nine Dinosaur’s on the East Coast, and only one Stanley’s. Hence many barbecue joints stay independent or spawn several additions, but many owners don’t want to franchise or duplicate. Jim 'N Nick's, a full-service 37-unit chain with locations in seven states, was recently scooped up by prominent private-equity firm Roark Capital Group, the group that just purchased Buffalo Wild Wings and has stakes in CKE Restaurants and FOCUS Brands, among others. Will it be able to scale the chain, founded in 1985? Fast casual Dickey's Barbecue Pit, started in 1941 by Travis Dickey, is the largest barbecue brand in the nation with more than 550 locations in 44 states. Read more about CEO Laura Rea Dickey's plans for the brand here.

Brian Warrener, associate professor of Hospitality Management at Johnson & Wales University in Providence, Rhode Island, characterized barbecue food as a “niche cuisine centered in the Midwest and South.” But he considers the food so regionalized that it will never attract the hordes of customers needed to turn into a national chain.

Warrener harbors a classic image of a pitmaster, “a guy who’s out with the pit, making it for the second generation, who can tell the temperature of the wood without taking it.” But that image of authenticity, which rings true with many millennials, won’t sustain a national chain. 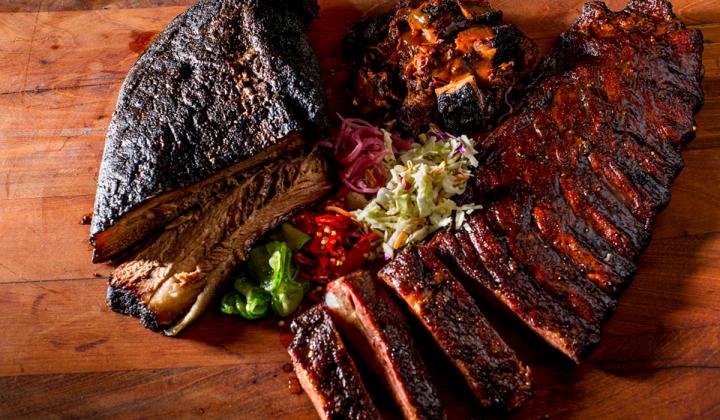 The Goldbely Sampler at Mighty Quinn’s BBQ, which launched in Manhattan in 2012.

Millennials are attracted to hipster barbecue joints around the country such as the Pig Beach in Brooklyn or Durk’s Bar-B-Que in Providence. And Warrener said they operate like craft breweries, but the minute it expands into “a chain of 1,500 locations, it’s like Budweiser, and millennials flee.”

Borell noted that barbecue chains haven’t gone national because of a “relative low guest frequency” and because it’s so regionalized. What passes for a pulled pork sandwich in Texas differs from what’s popular in Carolina, making going national difficult, he says.

Smokey Bones has 66 locations in 16 states and Borell said it expects to open a “handful, maybe three or four in 2018.”  It is also “undergoing a refresh and remodeling to upgrade the sites and menus of Smokey Bones. And with expanding, we’re making sure we’re in the right locations with the right demographics.”

In Smokey Bones’ future, he expects “we’ll continue to evolve the brand and innovate with the management team and continue to open select locations every year.” 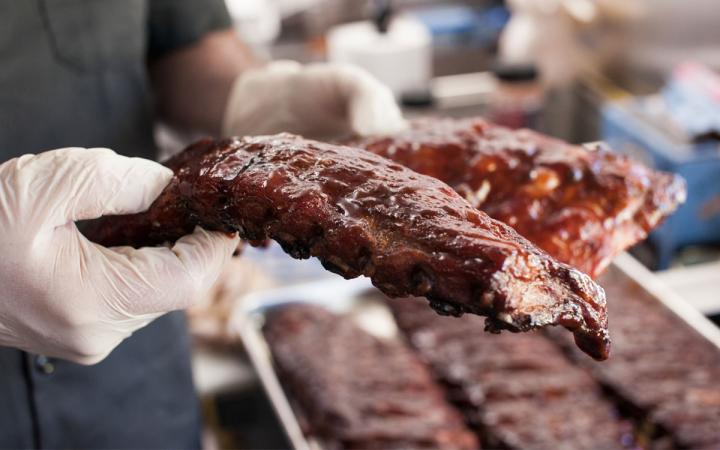 Sonny’s Franchise Company sold all but one corporate location to an existing franchisee.

Bryan Mroczka, the Maitland, Florida-based head pitmaster at Sonny’s BBQ explains that becoming a pitmaster requires taking an intensive program that teaches specific skills. Cooks at Sonny’s BBQ are trained in its Pitmaster Academy, taking two classes and going through three-month training with a pitmaster.

Pitmasters learn how to use smoke, and cook “low and slow,” and how to handle the marble and fats of most barbecue meats, Mroczka said. “During the training, pitmasters-to-be learn the science of smoking, the knowledge of cuts of meat, cooking times and temperatures, and the artistry of making sauces and rubs,” he says.

Sonny’s BBQ has opted to sell 111 of 112 outlets. A spokesperson said, “At the end of 2016, Sonny’s Franchise Company sold all but one corporate location to an existing franchisee, in an effort to being a top-tier franchisor.”

It costs a $25,000 licensing fee and 3.5 percent royalty fee to pay for a franchise, but Business Insider noted a typical restaurant franchise costs about $1 million or more to open, though prices vary due to location. Most Sonny’s BBQ outlets average 5,000 square feet and seat 180 guests.

In terms of finding the right franchisee, “It’s all about finding the right people. We’re looking for people who understand the restaurant landscape, someone with a passion for business and barbecue,” Mroczka says. 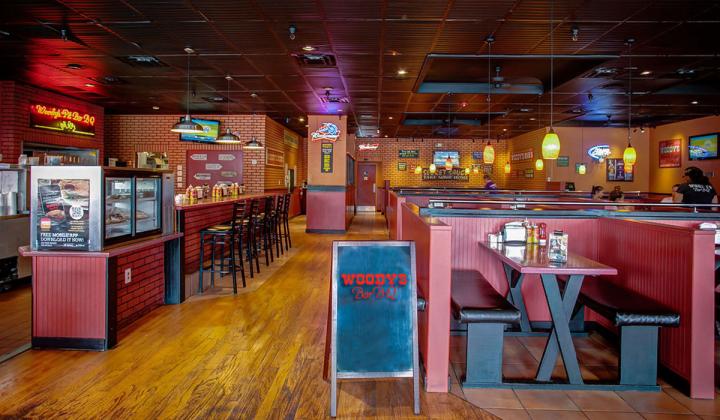 Woody's Bar-B-Q has 20 locations in five states, including Florida, New York, Kentucky, and Pennsylvania, and is adding two or three per year.

Yolanda Mills-Mawman, president and co-founder of Woody’s Bar-B-Q, says that, “Although many have tried, no one in the barbecue industry has been able to strike that perfect balance of regional offering for the same mass appeal that pizza and burger chains enjoy.” Even religion undercuts barbecue’s appeal since Jewish and Muslim faiths prohibit eating pork. Nonetheless, she says, barbecue chicken, beef brisket, slow-smoke turkey, and grilled prime rib appeal to a wide array of guests.

Woody’s Bar-B-Q introduced a quick-service model in 2014, with a smaller footprint to streamline processes, though only one of 18 franchises (it also has two company-owned Woody’s) opted for it. Its 20 locations are in five states, including Florida, New York, Kentucky, and Pennsylvania, and it’s adding two or three per year.

Hugh Mangum, one of three founders (including Micha Magid and Christos Gourmos) of Mighty Quinn’s BBQ, which launched in Manhattan in 2012, says that the intense process of making barbecue food makes proliferating complicated. He described preparing barbecue as a “process that takes two-days from the time you bring in the product and then clean it, season it and smoke it.”

While chicken or sausage can be prepared in two hours, brisket and pork require upward of 18–24 hours of smoking. Hence, he says, “There’s no way you can scale that in ways you can prepare burgers or burritos.”

Moreover, Mangum says that developing a barbecue restaurant requires installing ventilation and a hood, with a black-iron flue and putting a smoker inside, which can be tricky, difficult, and expensive.

Lastly, becoming a trained pitmaster to prepare barbecue food is more complicated than tossing up dough or pounding a beef pattie. “There are nuances to managing a fire, knowing the proper combustion level, the proper humidity, which all requires a lot of time and effort to prepare the food properly,” Mangum says. 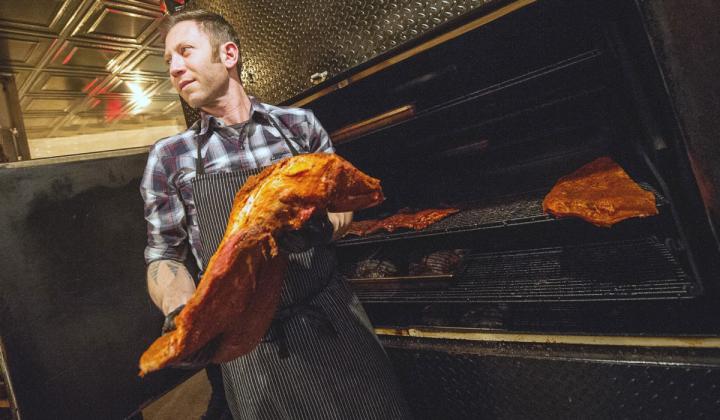 In the pricey metro New York area, Mangum has self-capitalized 11 Mighty Quinn’s (he also has four overseas licensing deals in Dubai, the Philippines, and Taiwan).

But expansion is complicated, tricky, and painstaking. “We’ve been flying by the seat of our pants and have been experiencing some growing pains,” he says.

In fact, after expanding at a “rapid pace,” he wants to take a hiatus for a few months, step back, and evaluate its growth. Still, he admits, Mangum and his financial team are exploring expanding to places like Boston. “It’s not a matter of if but of when,” he says.

Mangum’s original business plan of creating a menu served cafeteria-style, with a streamlined number of nine meat items and sides heighten the chances of expanding. “If there was ever a hope of scaling it up, the more streamlined we are, the easier it is, to replicate it,” he says.

Johnson & Wales’ Warrener thinks the prospects of a major national barbecue chain emerging in the future are slim for several reasons, “including regional preferences for different styles, high food cost, high cost of equipment, and a preference among consumers for authentic independent operators.”