Antonio Swad Swings Back into the Restaurant Business

The founder of Wingstop and Pizza Patrón is back with a new concept.
April 2019 Rachel Taylor

Antonio Swad thought he had a brilliant idea when he opened his new restaurant Porch Swing. He was going to present soft drinks in a fun, interactive way. Guests would be offered a cup of crushed ice and a 16-ounce can of their favorite soda to pour over. Swad figured it would be a hit.

Just a little over a month since opening, guests don’t seem to agree.

“And as it turns out, people really don't like it,” Swad says.

This is just one of the challenges Swad has faced since debuting the concept in Dallas a month ago. Swad, who founded quick-service chains Wingstop and Pizza Patrón, finally felt he was at the right place to dive into the full-service space after selling the latter brand two years ago.

Every day, though, has presented new lessons for Swad as a first time full-service operator.

“I sort of look at it like getting the restaurant open was analogous to getting to the starting line of the race,” Swad says. “It's in no way just getting a restaurant built and getting it opened. It's accomplishing ultimately what you need to accomplish with a license to learn, and I'm trying to do that every day.”

Swad is using customer and server feedback, he says, to help transform processes along the way. One example: Initially, he didn’t realize how big of a role reviews and social play for sit-down venues. “I’ll be honest, I was completely shocked,” he says

He admits he was annoyed to see customers reviewing their dining experience before they had even left the restaurant.

But Swad’s mindset has changed to embrace the reviews and use them to remedy issues and incentivize employees.

“I've gone full circle on it,” he says. “At first it really bothered me … We had a very rough opening and we’ve used reviews particularly when it was about the service to learn about what we were falling short on.”

New servers were hired and the reviews have reflected the improvements. In the past, Swad says, companies used mystery shoppers to see how they were doing. Now, the brand has various customer experiences at their fingertips, and they don’t have to pay for them. Servers with exceptional reviews are presented with gifts, which has increased table touches and overall customer service in the restaurant, he says.

When it comes to food quality, Swad sees the reviews as a real-time solution as well. If diners are saying the potatoes are lumpy in their reviews and Swad and his team are monitoring comments, they have the ability to go to the kitchen and identify the disconnect.

The concept is working so far. It’s nailing down and tweaking minor issues that have Swad busy. He is hands-on with the daily operations, talking with servers and cooks to see what’s working and what needs to be changed.

And just like Swad learned with his soda experiment, some customers just aren’t going to like every idea. 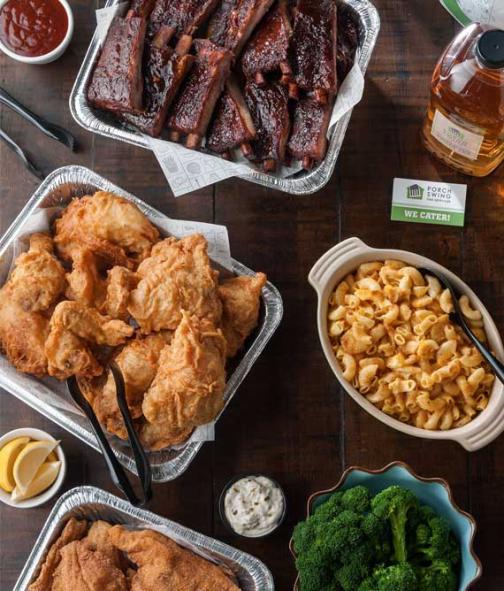 Fried chicken and chicken fried steak are classic Southern dishes guests will find on the menu at Porch Swing.

“Do I want to just try to prove a point to them and lose sales over it?,” he says. “Or do I want to just take a big swallow and say, ‘OK, well, I'm going to get this change in the works so we can give people and meet their expectations just a little better.’”

Swad calls the food at Porch Swing, “polished comfort food.” The restaurant was designed to be a place where Swad would like to dine himself. He wanted a space that had a nice, crisp, new environment, where the food was inviting and the menu understandable.

“Polished comfort food … refers to not only just the food, but also the environment,” Swad says. “We put a lot of equity into the interior. In many ways it was the same type of worry you would put into fine dining. But it's not fine dining. We wanted people to walk in and have that ‘Wow, this is nice’ moment. I thought if we could combine that moment with food that they were sort of already familiar with and executing these old favorites to a little bit higher level. I thought we'd have a shot.”

Porch Swing’s menu only consists of eight entrees: two beef items, two poultry items, two fish items, and two pork items. The symmetry was pure accident, Swad says. And although the menu might seem simple to some, there’s a lot that goes into those eight offerings. The Porch Swing kitchen prepares 55 recipes from scratch to create those options. From gravy and tartar sauce to condiments, everything is made in house.

“You'd be surprised you can cover quite a bit of people's desires when you really sit down and you balance out the menu,” Swad says. “I think our guests are noticing the difference. I mean, it's extremely high quality food, but it's familiar food and we try to execute it at the highest level possible.”

Small details—like frying the chicken fried steak in beef fat instead of vegetable oil—pay off with bold flavor throughout the menu. And although these details are not outlined specifically, Swad says customers are vocal about how they can taste a difference.

The kitchen is split in half to cater to two different preparations techniques: slow cooking and frying. On the slow cooking side, cooks prepare dishes like St. Louis-style ribs and roasted pork loin. Nothing is cooked above 225 degrees on that side, Swad says.

“The offset to that is it takes a long time when you're cooking something at such a low temperature,” he says. “But there are tremendous benefits to that when it comes to flavor.”

Swad doesn’t see any major menu developments and wants to keep it small, but he isn’t oblivious to making changes when necessary. Brisket served with Porch Swing’s Red Rover gravy is being tested on Sundays to see if the classic Texan dish has a chance at going full time.

Swad, however, is confident another option—a roasted half chicken—will become menu item No. 9. At a quick glance, the menu might seem heavily focused on fried food even though there are other non-fried options. Swad sees the roasted chicken as another “healthier” choice.

“It has a broad customer base, people want to get chicken, but will say, ‘we're just not looking for fried chicken,’” Swad says.

When considering new items to be added to the menu, Swad is also thinking about the burden another entree might put on his employees. If he can serve a new item in an efficient and timely manner during a Saturday night rush at the 280-seat restaurant then it passes the test. 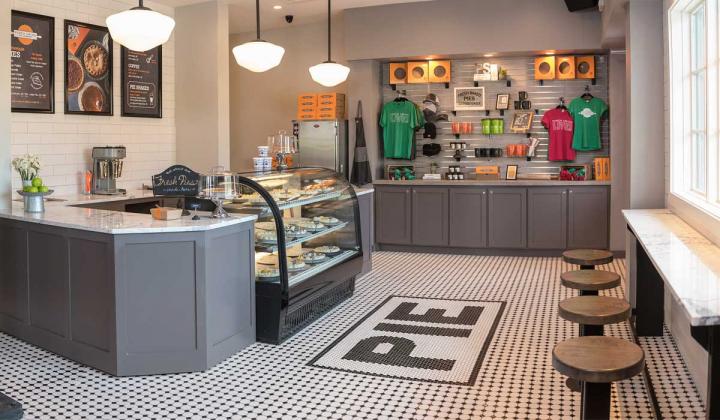 Porch Swing's Pie Company has its own entrance.

A slice of pie

When it comes to dessert at Porch Swing, Swad wanted something that was familiar and classically Southern. So, he went with pie.

“Everybody understands a slice of pie,” he says. “I don't know anybody that says, ‘Oh, I really don't like pie.’”

Six or seven different pies are on the menu or can be picked up at the Porch Swing Pie Company’s store inside of the restaurant. The pie flavors range from classic apple to cookie topped pecan pie.

Customers can order pie while dining at Porch Swing or pop in to the Pie Company, which has its own entrance. Porch Swing’s kitchen has an entire section dedicated to the bakery and a dedicated team of bakers who make the pies from scratch each day.

“We took pies over the top,” Swad says. “It’s really working out. It's turning out to be between 12­–14 percent of our total revenue. Our rate on pies is phenomenal.” 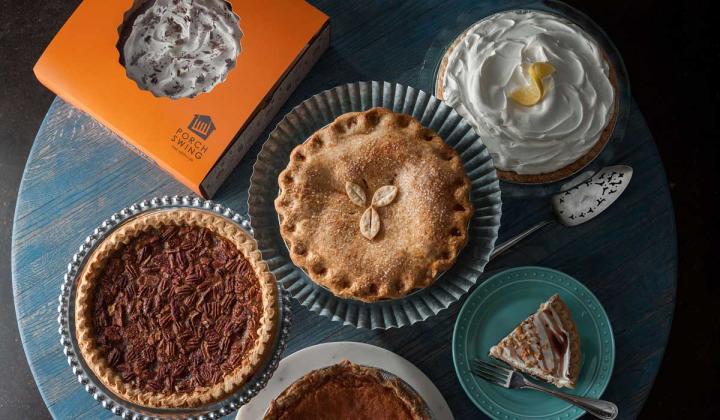 Guests can order both slices of pie or whole pies while dining at Porch Swing.

Swad wants to keep the pie menu small to ensure consistent quality. Even though pies are working well, he doesn’t see the list of flavors exceeding seven. However, guests will see different flavors appear on the menu as the company develops and tests them.

Much to Swad’s surprise, people are ordering whole pies just as much as slices. He sees a lot of potential for growth within the store element.

“People are taking your brand and they're taking it home … when they eat the pie it better be damn good. Fortunately ours is,” he says.

Porches play an important role in the culture of the South, Swad says. Hence the name. Swad emphasized that notion by offering an elevated outdoor seating experience. Out of the restaurant’s 280 seats, 120 of them are out on the patio. The covered space can be used most of the year with heating units for the colder days and large fans for warmer ones.

Swad is developing another sub-brand of Porch Swing, Porch Swing Live, to expand the live music aspect. A stage is set up year-round and musicians just need to bring their instruments and plug in for a show.

When entertainment isn’t scheduled, guests can take center stage if they want. The stage has a few guitars if someone wants to get up and perform. The stage’s marquee is also interactive so any guest can add their name to it by programming it on an iPad.

“What happens next? They take a picture and post it somewhere,” Swad says. “And that’s a brand impression right there. People are having a ton of fun with it. Heck yeah go up on the stage. That's what it's for. If nobody's performing on there it might as well be you.” 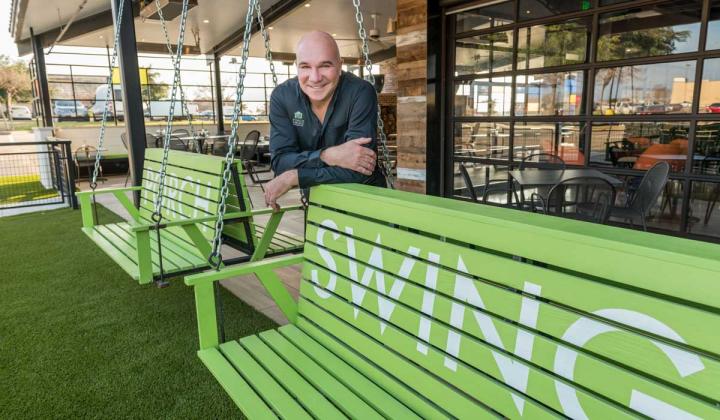 Antonio Swad is learning something new everyday at Porch Swing.

The restaurant wouldn’t be complete without porch swings hanging out front. Swad has an expression, “It’s hard to be mad sitting on a porch swing,” that he thinks that perfectly embodies what he’s trying to accomplish.

“I just love when I look out the window and I see people usually on their way out,” Swad says. “They’re full, they’re satisfied, and they decided to sit for a moment and swing. Nothing makes me happier than to see that. That means they got the whole experience.”

Swinging into the future

“I didn’t get into this to build and operate just one restaurant,” Swad says. “I have a lot of confidence that the concept is the right mix.”

Southern food no longer is contained to the South. Across the country, consumers want to try classic staples and Swad thinks Porch Swing is a good vehicle for the cuisine. At the moment, he is focusing on working out the kinks at the first restaurant before building another one in Texas. Swad plans on testing a third location in a different market.

“I think the stores have the capability of doing extremely good ratios of sales to investment,” Swad says.  “I'm selling food that pretty much everybody eats either regularly or occasionally. There's a lot of areas in this country that have a demographic that's a good fit for the food.”

Swad admits that he is still at the beginning of the race. Porch Swing is far from perfection, but Swad says they’re close.

“It's a work in progress,” he says. “It's sort of like getting married or having kids. They say you're never quite ready. And I sort of feel that way about this.”