Angry Crab Shack has the Attitude to Make it Big

Ron Lou admits people often laugh when they hear his goal. But that doesn’t mean he isn’t serious. “My biggest thing when you walk into Angry Crab,” he says, “is I want to punch you in the face so you remember Angry Crab.”

Of course Lou, who was the first Asian American to play in the NFL when he joined the Houston Oilers in 1973, isn’t referring to anything literal or physical here. What he’s talking about is the unforgettable and unique nature of his buzzing restaurant chain. He calls Angry Crab Shack, which has scaled to seven Arizona locations since its 2013 inception, an “opportunist restaurant with an attitude that’s always thinking outside of the box.” And it has ambitious projections to match its fiery persona. Over the summer, the brand announced a nationwide franchise opportunity. The plan: 100 restaurants by 2023. In September, the Mesa-based chain said it expected to open five Arizona stores in 2019, which would significantly up its base. Current stores are enjoying average-unit volumes of about $3 million and sales have been climbing, the company says.

Lou has worked in restaurants for 40-plus years. He doesn’t pull punches and isn’t somebody who projects beyond what he personally believes. There are several elements of Angry Crab Lou thinks lends it to national growth, and none of them are head-scratching proclamations. To start, Angry Crab is a low-cost, straightforward operation.

Initial investment ranges between $450,000 to $850,000, and owners are seeing a 5 to 1 sales to initial investment ratio, Lou says. “Typically, franchise owners are forced to pick simple operations or high ROI, but Angry Crab has developed a model that allows you to have both,” the company says. Three of the locations also serve barbecue as Angry Crab Shack and BBQ branded venues. Five are company-run units.

Angry Crab looks for second and third-generation restaurants to convert. Lou himself will go down and sit, look around, and design it on the spot. There isn’t a cookie-cutter box to fit into. 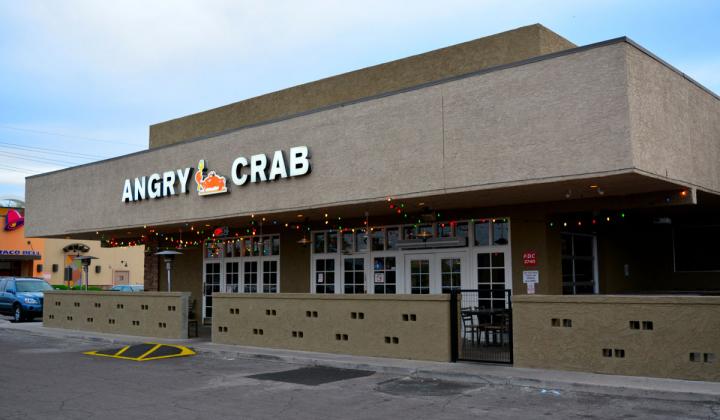 The chain targets second or third generation venues to build in. 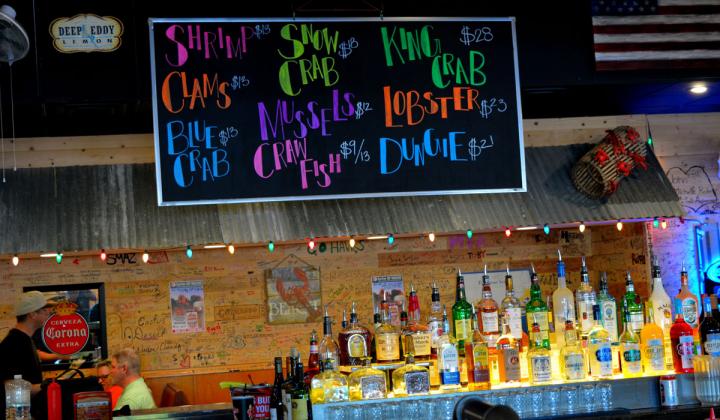 Angry Crab's designs are unique to each location.

When it comes to running an Angry Crab, Lou says, “It doesn’t take a rocket scientist. You’re not dependent on someone to learn the design, dishes, and trends in the industry. Because this is one thing I believe in: I’m not looking for a trend.”

Walk through any town in America and what’s likely to be the oldest restaurant? The steak and seafood joint. Maybe they’re the same restaurant. Either way, seafood is not a passing fad or segment restricted by demographics or the latest diet movement. “If you notice,” Lou adds, “most restaurants, their life expectancy is what, four or five years? Then people get bored and they look for something new. Or they’re asked to pay an outrageous price.”

The Angry Crab is hitting the middle and working class with everything it's got, Lou says. “They’re our main base to succeed. This is their home food. Hispanics. Blacks. Asians. Every aspect. You go into our restaurant and you see that we cater to every spectrum of the world.”

“Our food is international, meaning people enjoy it,” he adds.

Angry Crab draws on Cajun and Asian flavors, sourcing lobster from the East Coast, Dungeness Crab from the Pacific Northwest, King and Snow Crab from Alaskan waters, and crawfish from the Gulf of Mexico. If that sounds pricey and white tablecloth it’s not. Lou says it’s more likely families will grab bibs, roll up their sleeves, and forget they’re out in public. There’s everything from Angry Edamame to breaded scallops to gumbo to Cajun seafood boils priced by the pound.

“I’m hoping this will be a concept where it’s a national chain with casual seafood. A fun place. And this is one thing that I think is happening with all these restaurants,” Lou says. “Customers need a place where you’re not restricted when it comes to value and seafood.”

He likens eating at the Angry Crab to a tourist checking out the native spot. “You want to experience things. That’s what the Angry Crab is. You’ll experience a fun, no-care place that’s a working-class meal, where you can buy a pound of shrimp or king crab, which for most people is in the upper tier. But here you can get value and you can come in with a large group, have a beer, and not feel like you ran out of money.”

The idea to expand came from Andrew Diamond, the president and CFO of the company. Once they got the notion to grow, a few things needed to take shape.

Culinary wise, the chain built a system where it could keep the food consistent thanks to proprietary, house-label spices. The boiling itself is a one-day training process. All any location really needs, Lou says, is a solid kitchen manager. He never wanted Angry Crab to be reliant on a chef. “That’s the last thing I want to do,” Lou says, “is have someone hold me hostage.” 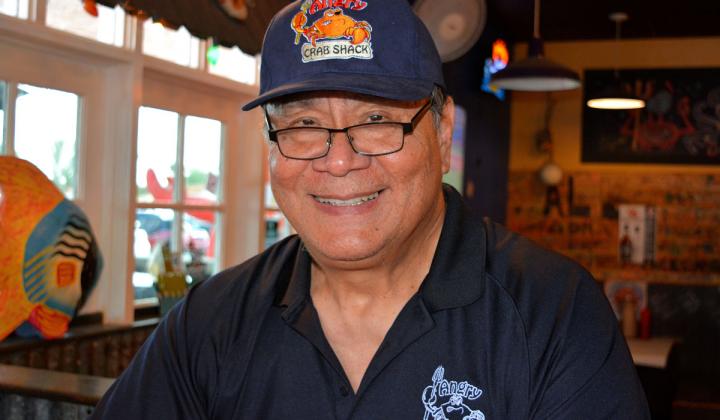 Ron Lou has been in the restaurant industry for more than 40 years.

This venture started when Lou was running a Chinese restaurant that served traditional fare. He came down with a staph infection and landed in the hospital. Lou had back surgery. Two metal knees. When he emerged, Lou had the chance to sell the business and took it. But being the self-proclaimed workaholic he is, Lou wasn’t sure how to pass the time.

So he got back into the business he knew inside and out for four decades. Lou had a lot of time to read up and conceptualize as he spent close to a year off his feet. “I sat down and said, ‘I’m going back into restaurants. I’m not going to retire or sit back.’ So I asked myself, what things do I really dislike about restaurants? And I set out to resolve them.”

Since he doesn’t cook, the first thing was creating a brand that didn’t need a head chef. Lou signed a lease within six months of leaving the hospital. Thee years later, Angry Crab had five restaurants. He basically outworked his weak points, like accounting. He jokes that Diamond asked him for numbers once and Lou pulled out a shoebox. “I’m not what you would consider astute at administration or financing, because I’ve always worked for myself. Now I’m learning the corporate life of ‘we.’”

Lou is about as hands-on as you can get with the day-to-day. While it’s probably an exaggeration, he admits, there are stories of Lou driving some 800 miles to visit every location in one day. He regularly checks in on stores and solves problems, gets to know the staff from the top level down. Lou has always been this way. He recalls laying the sewer line in his first restaurant 40 years ago. 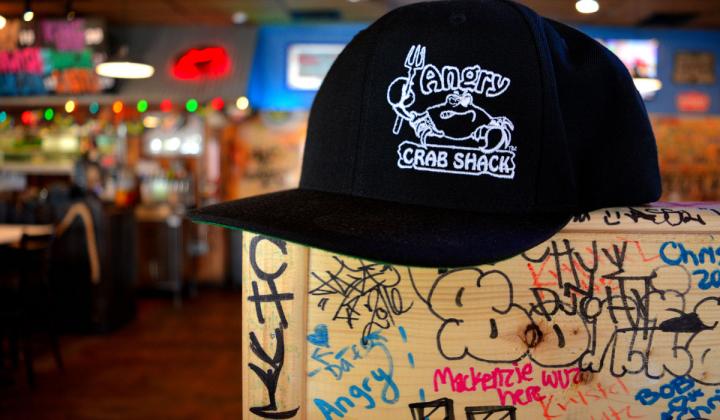 Angry Crab has plenty of attitude.

“For me, I’m always looking for a way to improve and make a more efficient operation,” Lou says. “And the only way you can do that is by not sitting in the office.”

Of that particular day, often spoke about in the organization, Lou laughs, “I really did some driving. But whatever has to be done, I will do it. Because a lot of people just sit back and I personally want results. I want to make sure all my restaurants make it.”

It’s been an adjustment learning to delegate. “I’m getting there. I’m getting there,” Lou says. “The goal now is to become more of a leader, to give all of my staff and management an opportunity to succeed. I don’t want them to make excuses. So I’ll tell them what I see and we’ll become a better restaurant.”