Amy Morton (right) and Chef Nicole Pederson are also the team behind Found, a seasonal favorite in Evanston.

Amy Morton's Steakhouse is a Fitting Ode to her Father

Amy Morton's new restaurant pays homage to her past while redefining what it means to open a modern Chicago steakhouse.
January 2017 Danny Klein

Amy Morton understood what it would mean to label her new restaurant a “meat-centric hideaway.” Even in Chicago, a city where primal concepts arrive quicker than ants at a family picnic, if a Morton mentions meat, people listen.

“People will be like, ‘Oh, they’re doing steaks. She’s a chip off the old block,’” Morton says.

Yes, Amy Morton is one of those Mortons—a last name that might as well be a six-letter synonym for steak. Her father, the late Arnie Morton, founded Morton’s The Steakhouse in 1978. The famed chain, which has grown to 74 units around the globe, earned renown for its hulking cuts of meat set beside equally colossal potatoes.

The announcement that Amy was opening The Barn in November, though, carried a twinge of surprise. She is well known in Evanston for her Found Kitchen & Social House concept, which feels pretty far removed from the family tree. The small plates, seasonal restaurant prides itself on sourcing ingredients within a two-hour radius and features courses like harissa roasted Brussels sprouts, winter squash, cilantro, and pepitas.

The Barn, Amy says, is a clear, but subtle ode to her father. “My dad would be so proud of me,” she says. “I wish I took time to think about it more because, honestly, nothing is more important. And I hope once we get through our first couple of months I’ll really be able to sit back and think about that. Because there’s nobody I wish I could be hanging out with more than him.”

While the legacy isn’t broadcasted, Amy knows savvy dinners will quickly put those pieces together. And when they do, there will be a rather lofty bar to measure against. 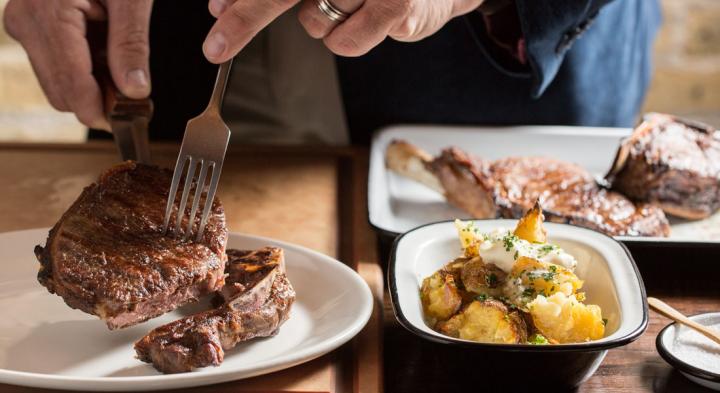 While steak is hardly the only attraction on the menu, there's no question it stands out.

On that note, she isn’t concerned. “I wouldn’t call it added pressure,” she says. “I wasn’t going to stop until we were doing the absolute best product available.”

Amy’s arrival at the physical space was also a deliberate process. The 19th-century brick structure housed horses for the Borden Condensed Milk Company. Until Amy signed on, it hadn’t been used for anything else, sitting vacant for some 100 years.

Amy actually considered the location for Found. After passing, she kept in touch with the landlord and eventually circled back. Several years of planning went into action in March and, seven months later, despite a sewer hiccup, Amy was walking into a unique restaurant where guests enter through an alley—just like her father’s first restaurant, Walton Walk.

There are soaring 20-foot-ceilings and crumbling brick walls, and a former hayloft repurposed into an overlook featuring three large half-moon, tufted oxblood-leather booths along the back wall.

The restaurant projects a speak-easy vibe and a yesteryears warmth. In that nostalgia, Amy didn’t have to worry about living up to her legacy. All she had to do was lean on it. 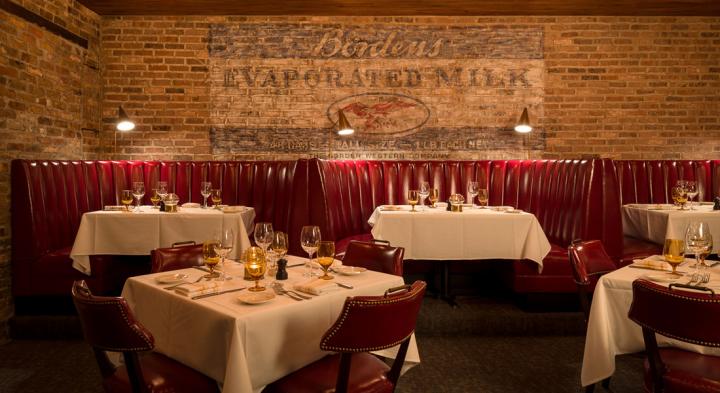 In truth, The Barn is not anywhere near your traditional steakhouse. It doesn’t weigh down the plate with portion size, à la carte isn’t gospel, and the menu is hardly steak-centered. There’s bison, king crab, sea bass, sweetbreads, and other non-traditional items, and while there are three cuts of prime heritage angus available, the real link between Amy and her past is the service.

Early on, The Barn limited reservations, starting with 21 people on the first night and slowly ramping up, to make sure enough time was allotted to smooth out the kinks. Most vividly, the tableside service was crucial, she says, for rightly honoring Arnie. The staff will debone fish and make signature salads in custom carts designed by industrial artist Andrew Bates at the table.

“That’s been one of the trickiest pieces in the puzzle,” she says. “There is a lot of nuance there. And it’s one of the big, big reasons we’ve been so careful and have slowly added reservations. There’s a lot of moving parts. But it’s a really important part of the service. It’s been a lot of fun to work on.” 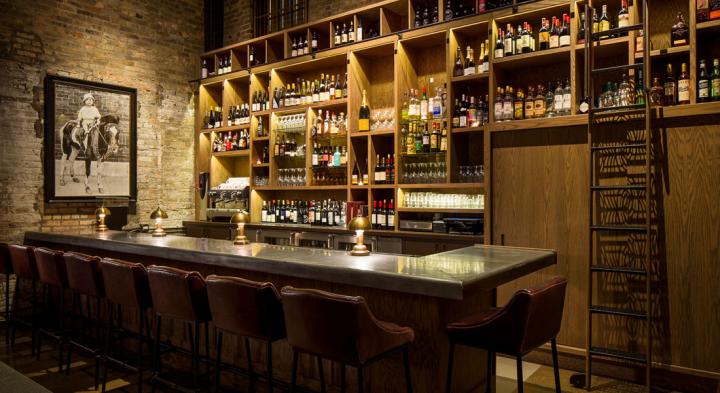 Next to the bar, a photograph of Arnie as a child riding a pony hangs from the wall.

As the restaurant continues to smooth out operations, Amy expects the experience to heighten, bringing the bond between her and Arnie even more into the open.

Next to the bar, a photograph of Arnie as a child riding a pony hangs from the wall. “I knew from day one that picture was going to be in there,” she says. “One, it’s my favorite picture of my dad, and two, it’s him on a pony, which is fitting. … This has been really exciting and really fun. And even though it’s an little homage to my dad, the things people bring up each and every day about him, his restaurants or the experiences they had in them, it feels like my whole reason for going to work.”