The company is based in Northern Virginia.

The $250 million investment will help finance 100 new locations over the next five years.
December 2018 Rachel Taylor

The concept behind Crafthouse isn’t overly complicated: use locally produced products and goods to create craft dishes, and offer customers a large selection of the best local craft beer, spirits, and wine. Founder and CEO Evan Matz simply wanted to bring it all together.

“I thought of how to bring to the local area great service and product, and listen to the customers and give them what they wanted,” Matz says. “Customers are different from each locality and I said ‘why not make Crafthouse more of a ‘eat local, drink local, support local’ eatery’ and that’s how Crafthouse was born under that concept.”

Since opening in May 2017, the Virginia-based eatery has fine-tuned its operations with scale in mind. Up next: A major franchising initiative.

On November 28, Crafthouse announced it secured a deal with American Development Partners to fund its nationwide expansion. The $250 million investment, Crafthouse said, will help franchisees open 100 locations over the next five years. As a part of this deal, qualified franchisees will be 100 percent funded to open new store, Matz says.

“As far as 100 percent funding goes with that cash that’s available for future franchisees that is only good for building from the ground up or purchasing a self-standing building. If it’s inline or endcap then they’re on their own with their own money or we are approved with the SBA, so they can go that route as well,” Matz says.

“It just allows, especially with our concept, local owners it just makes sense and you have much better controls when you have local owners rather than some big company overseeing it from far away,” he adds. 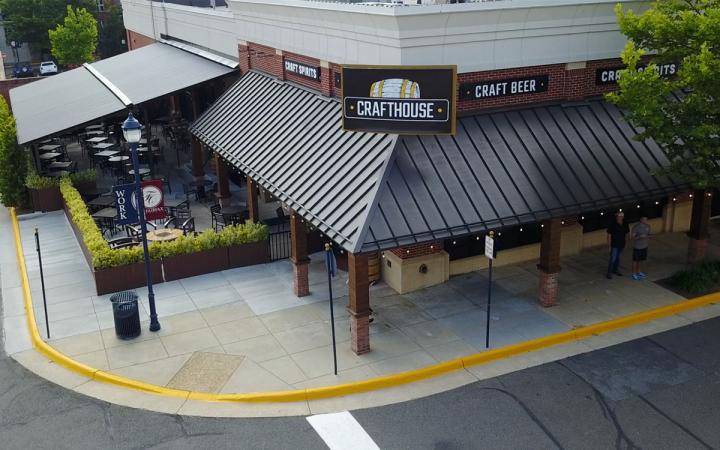 It might seem like a daunting task to expand such a local-focused brand, but Matz isn’t in a rush to meet the 100-unit goal for the sake of meeting it. The timeline is going to depend on how quickly Crafthouse can embed itself into new markets, Matz says. Going into a fresh community and partnering with local breweries and bakeries will take time. But the slow crawl is worth the end result.

“To develop one of these and open one up before it’s opened is nine months minimum,” Matz says. “As we expand we have a team that will investigate the local area. Unless the franchisee already has relationships we’ll search and find the local breweries and distilleries and bakeries and produce people and things like that.”

With this development framework, the next Crafthouse is slated to open toward the end of 2019 or early 2020 depending on when the new franchisee deals are signed, Matz says.

At the three current locations, customers can find more than 50 craft beers on tap and another 150 different brews in cans and bottles. Matz hopes every new location will have a similar number of craft beers on tap that are unique to the market and region.

No two locations will be the same and that’s OK, Matz says. The core menu items will be similar, but every location will have something a little different to discover.

“As you go to each Crafthouse throughout the country, yes it will look and feel the same, it will have some of the core items, but you can go in there saying ‘I wonder what’s different about this one’ because each one will carry different items,” Matz says. “So, if you go into Tennessee and they’re known for their ribs you know we’re going to have a slew of different types of ribs and brisket and stuff like that. Yet, if you go up to Maryland, it’s the crab cakes. So, we’ll have different things on the menu, in addition to just the alcohol and give the best local fare possible.”

The company is focusing on markets up and down the East Coast in the first phase of its franchising strategy. However, if the opportunity is right, Matz is open to looking at locations farther West if the right person comes around.

In addition to bringing jobs, Matz believes the investment will help potential franchisees support their communities in a few different ways.

“Our kitchen is a scratch kitchen and we bring in from local bakeries and we bring in local produce and things of that nature as much as local that we can support,” Matz says. “As we grow throughout the country it will be the same thing. We’ll be bringing in from local bakeries when we open in whatever city and the local produce beer and spirits and distilleries, we’ll also bring in.

Matz adds, “It’s about eat local … support the community, support local and people are really liking that. That’s how were growing. As we’re looking for franchisees and they’re going to take ownership in their locations and each one is going be individually owned to support that local economy and that local area.”