Oktoberfest is about more than lederhosen at Banger’s Sausage House & Beer Garden, which serves up a special menu for the occasion.

The Evolution (and Elevation) of Oktoberfest

Restaurants and breweries are taking the German holiday to a whole new level.

What began as a royal wedding celebration back in 1810 has now become a bona fide beer holiday in Germany and beyond. Injecting more than $1.5 billion into the Munich economy each year—according to data from personal finance website WalletHub—Oktoberfest celebrations have made their way stateside, too, with consumers flocking to restaurants, breweries, and biergartens for their fair share of German beer and sausages.

But to truly stand out in the eyes of schnitzel-seeking diners, concepts are going above and beyond with their Oktoberfest festivities, elevating food and beverage offerings while also upping the entertainment factor. “People are really looking for a party when it comes to Oktoberfest,” says Ben Siegel, owner of Banger’s Sausage House & Beer Garden. “We do a really good job of delivering a very authentic German Oktoberfest experience right in the heart of Austin, Texas.”

Although the brand used to carry out a 10-day extravaganza, it has since condensed its Oktoberfest celebration to just a three-day stretch—albeit one that’s filled with activities like live music from polka and brass bands; meat raffles and keg rolls; a firkin giveaway in partnership with local Live Oak Brewery; and rounds of hammerschlagen (a German game in which participants attempt to hammer nails into a wooden stump). Not to mention, plenty of traditional German fare, of course.

At Iron Hill Brewery & Restaurant—which has 16 locations scattered along the East Coast—food and beer play an equal part in taking Oktoberfest to the next level. “We think it’s really important to elevate the role food and beer integrations play together when we have these types of holidays that already have a beer-centric motif to them,” says Michael Hand, vice president of marketing at Iron Hill. In addition to its signature Vienna Red Lager and other German-style beers, Iron Hill also releases its own Oktoberfest brew each fall, which is available both in cans and on draft. 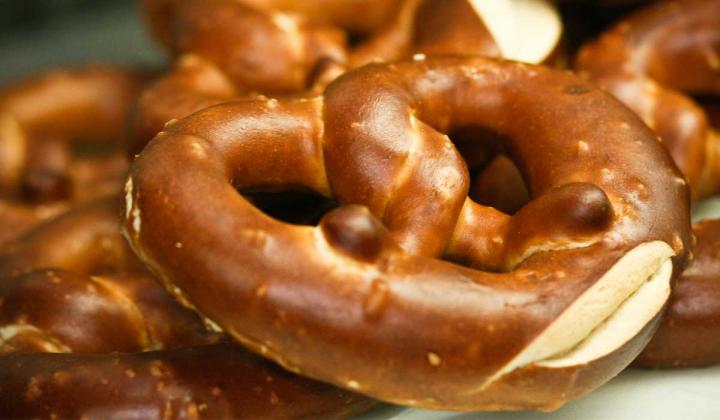 Far from Germany, Banger’s brings a bit of Bavaria to Austin, Texas, with drink specials, traditional pretzels, and more.

The brewpub not only spotlights these beers in their own right but also incorporates them into its holiday food offerings. For example, the best-selling Oktoberfest Egg Rolls feature Vienna Red Lager–flavored bacon sauerkraut, bratwurst, cheddar, and a beer mustard dipping sauce.

Other standouts on its multi-week Oktoberfest menu include Pommes Jaeger (house-cut fries topped with Gruyere, bacon, mushroom gravy, and a sunny-side up egg); Huhner Schnitzel (pan-fried chicken cutlets served with haricots verts, almonds, egg noodles, and a lemon herb sauce); and Hackbraten (a German-style meatloaf with Vienna Red Lager-braised red cabbage, smashed potatoes, and a caramelized onion sauce made with Abbey Dubbel Ale). “This menu makes us stand out a little bit by taking traditional fare and putting our own little spin on it,” Hand says.

For its King of the Hill loyalty club members, the Oktoberfest celebration is even more exclusive, with the company hosting a members-only night where guests can enjoy a limited-run beer, plus small-bites pairings that are a twist on its mainstay Oktoberfest foods. “We always look for ways to add a wrinkle to it to make these people feel like it’s unique and special,” Hand says.

On the opposite coast, fine-dining concept Lucques—home to James Beard Award-winning chef Suzanne Goin—doesn’t delve quite as deeply into Oktoberfest as Banger’s or Iron Hill, but it does offer an elevated prix-fixe menu inspired by the German holiday for one night only.

Dishes include warm potato salad with whole-grain mustard, cornichons, and caraway; an array of grilled and pan-roasted sausages served with roasted apples and sauerkraut; herb spaetzle with wild mushrooms, winter squash, Bavarian cheese, and chestnuts; and a pear and walnut crumble tart topped with raisins, creme fraiche, and vanilla ice cream. But the standout is undoubtedly its smoked ham hocks, which are braised for hours in Bavarian beer and served slathered with onions.

Speaking of beer, Lucques finishes off the meal (which is $65 per person) with a beer cocktail using German sour beer as its base. Other themed beverages include Bavarian beer, German and Austrian wines, and house-made mint schnapps—all offered amid a festive atmosphere filled with German-inspired music, photos, and staff dressed for the occasion.

“We take the food very seriously,” says general manager Matt Duggan, “but we don’t mind adding a couple of fun touches—a little wink here and there.”