Since the original location opened some dozen years ago, Eventide has become a fixture of the dining scene in Portland, Maine, thanks to its seafood Shack inspiration and Far-East-meets-New-England culinary slant.

How Eventide Oyster Co. is Spreading the Love of Maine Seafood

The James Beard Award-winning concept is planting its roots in Boston's Fenway Neighborhood—and shaking up its service model in the process.
January 2018 Mary Avant

Chefs Mike Wiley and Andrew Taylor may have a fine-dining background, but that hasn’t diminished their love for the tiny clam shacks and no-frills lobster joints that dot the coast of New England.

After meeting at Hugo’s in Portland, Maine—where they worked together with partner Arlin Smith under Chef Rob Evans—Wiley, Taylor, and Smith purchased the upscale eatery and founded Big Tree Hospitality in 2012, with the dream of opening their own version of a Maine seafood shack right next door.

“We had seen how well [Evans] and his wife, Nancy, had done with a lower-profit-margin, high-standards, high-technique type of restaurant like Hugo’s,” Wiley says. But to serve as a foil to this elevated concept, the trio wanted to create a restaurant with a more approachable menu and lower check average ($28 for lunch and $36 for dinner). Enter Eventide Oyster Co.

Eventide’s lineup of fresh seafood is evocative of summers spent on the shores of Maine, featuring lightly handled fish and New England favorites with a twist. Signature items include the fan favorite Brown Butter Lobster Roll—“People behave like it’s a Schedule 1 controlled substance,” Wiley says of the dish—as well as fried oyster buns, fish sandwiches, a continually rotating lineup of oysters on the half shell, and a range of traditional chowders and stews.

“Everybody thinks their grandmother has the best lobster stew recipe, so we took lobster stew and we did things a little differently,” Taylor says. “We grill the carcasses and make a stock out of that. We add green curry—we make our own green curry base—so we’ve taken it in a sort of Southeast Asian direction a little bit.”

This Asian influence can be seen in a number of Eventide dishes, including its New England Clam Chowder, which Taylor says looks almost like ramen with nori and oil floating on top. And while the Far-East-meets-New-England mash-up may seem curious at first glance, it makes more sense when you discover The Honey Paw, the team’s Asian noodle shop next door. 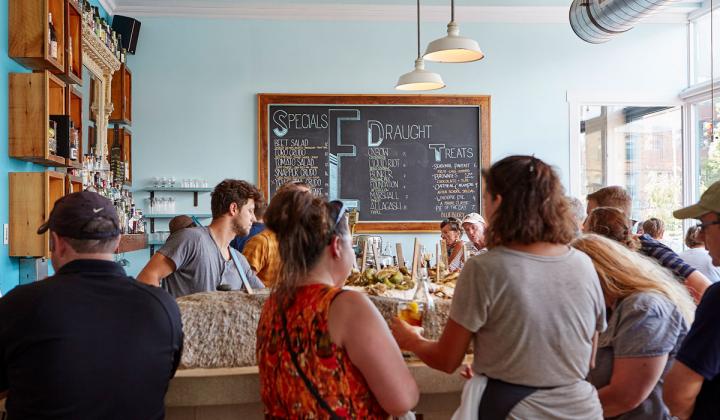 Eventide Fenway is a fast-casual, counter-service concept with “all the hits from Eventide Portland” in a sleeker, more metropolitan setting.

Because all three restaurants share a kitchen, there’s a fair amount of cross-pollination and flavor melding across the concepts. Wiley says that while the restaurants share recipes and culinary sensibilities, they are expressed differently through each concept’s personality.

And when it comes to personality, Eventide certainly has a lot of it, with a laid-back environment that feels light, bright, convivial, and friendly. “If you come in your flip flops and shorts, you’re totally ready to dine and have a great experience with us,” Wiley says.

Seating just 50 people inside and an additional 20 on the patio, the restaurant is what Wiley calls “cozy”—a feeling that is compounded during the busy summer season when wait times often exceed an hour and customers line up down the block for a taste of Eventide’s oysters. Wiley concedes that space can be snug, but it matches the vibe.

“We don’t want big, opulent lounge chairs. Having people on stools and at picnic tables feels a little more honest to that stripped-down Yankee spirit,” he says.

But, despite being a 2017 James Beard Award winner and a destination for diners around the country, Eventide isn’t immune to Portland’s off-season slowdown, with the colder months presenting a drastic downturn in foot traffic.

Last October, the owners found yet another way to bolster winter business—or, rather, two. They entered a new market in Boston and they adapted to a new side of the restaurant industry: fast casual. “Almost immediately when we opened Eventide Portland—and it was off to a pretty good start—we realized that the way people were using us was the way people use these little seafood shacks,” Taylor says.

Eventide Fenway—located just steps from Boston’s famous Fenway Park—is a fast-casual, counter-service concept with “all the hits from Eventide Portland” in a sleeker, more metropolitan setting.

Upon entering the store, guests are greeted by a team member who takes their phone number and order. Oyster orders are handed off to the shucker, who prepares the seafood staple right in front of diners. By the time guests get their drinks and oysters, they receive a text message alerting them that their food is ready for pickup at the counter. Diners also have the option of continuing service, where they can order additional food, oysters, and drinks from servers working the floor.

“What makes this unique is the level of quality of the food, the beverage program, and the service in a fast-casual setting,” Taylor says. “Eventide Portland will always be our flagship; it will always be unique. But I think what we’re doing in Fenway is really something different for the industry.”

Not only does the new location draw a bigger lunchtime workforce crowd than Eventide Portland, but it also places a greater emphasis on the beverage program through tapped rosé and other wines, along with a strong craft beer list.

“We wanted people to feel comfortable coming in with a date and having a meal, as opposed to grabbing a sandwich or having a half-dozen oysters and getting out of there,” Taylor says.

Though their limited-service experiment is still underway, both Wiley and Taylor agree that this fast-casual concept would be the path forward if the brand should ever expand.

But with multiple restaurants in Portland and a brand-new service model underway in Fenway, the duo has bigger fish to fry at the moment than the idea of unit growth.