Moving into these fresh markets will bring Woody’s into different barbecue territory, too.

The Florida-based barbecue concept has partnered with a franchise sales company to create an aggressive, small-town-centric strategy.

Woody’s Bar-B-Q knows its audience. Together with the franchise sales company Eastbourne Brands, the Jacksonville, Florida–based barbecue restaurant has been crunching the numbers behind its best-loved stores, leading to a new growth strategy built around the customers who visit Woody’s most.

“Our two top-performing stores are surrounded by customers who are hardworking folks. They appreciate good value and authentic, from-scratch recipes. So we’re really looking for locations that have a blend of that small-town environment and value and also an appreciation of the type of homemade food we serve and the quality that we produce,” Eastbourne Brands president Tra Williams says.

Woody Mills—who co-founded the full-service barbecue concept with his partner, Yolanda Mills-Mawman in 1980—hired Williams, a longtime friend, to generate data about the brand’s network of Florida locations. This Eastbourne insight identified the two top performing Woody’s locations, one in Macclenny, Florida, and one in Sabastian, Florida, giving birth to a expansion strategy that Williams calls the “Hometown Campaign.”

The brand will roll out this new campaign in mid- to late October, just in time for Woody’s 40th anniversary in 2020. The idea is to grow the current network of 18 stores by building new, franchised restaurants in areas that echo the demographics of the brand’s top-performing towns. The areas touting Woody’s current top performers are different sizes—Macclenny is smaller, with about 6,700 residents, while Sebastian is on the higher end with a population of 25,000 or so residents, according to 2018 U.S. Census data.

But both towns have residents who appreciate traditional Southern flavors, as well as families and laborers in search of affordable, filling fare. “We see the same hardworking people in for lunch three or four times a week in those locations, because they’re looking for value and speed of service. Then, in the evenings, we see families who are looking to feed a number of people on a limited budget. Our best customers know the importance of value and work hard for their dollars,” Williams says.

So far, the Woody’s-Eastbourne team has a list of roughly 50 locations in the Sunshine State with similar demographics to Macclenny and Sebastian. The plan is to expand first into the top contenders out of these 50 locations, a narrowed-down roster that Williams is working on putting together before the campaign officially kicks off later this fall. After pursuing growth in those targeted Florida locations, Woody’s will begin franchising in other states—Georgia, North Carolina, South Carolina, Tennessee, and Alabama—with similarly high demand for the brand’s Signature Baby Back Ribs and huge helpings of classic Southern sides. 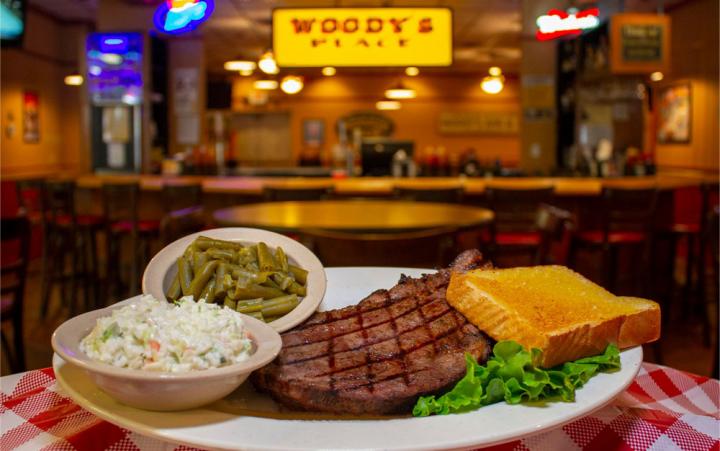 Woody's tries to appeal to all barbecue tastes with its menu.

Moving into these fresh markets will bring Woody’s into different barbecue territory, too. The range of regional barbecue preferences in the South are no joke, from Georgia’s sweeter-style sauce to South Carolina’s mustard-based condiment to North Carolina’s shredded meat soaked in vinegar-based sauce, but Williams said that the brand’s menu already includes many of these different styles of barbecue.

Customers can order barbecue slathered in sweet sauce, North Carolina pulled pork, or Texas-style beef brisket at all existing Woody’s locations, meaning that the planned growth won’t require significant menu updates or additions. If a region calls for a different variety of barbecue that Woody’s doesn’t already provide or can’t easily tack onto its menu, then the brand will stay out of that region. “Our goal is to be authentic in every step of growth,” Williams says.

The Woody’s menu is nothing if not traditional, and the brand will be pursuing franchisees who are traditional as well. The brand considers only those with at least $80,000 in liquid assets as potential franchisees, but previous experience with restaurant operation isn’t always the necessary accompaniment for those assets. Instead, Williams says dedication to the Woody’s tradition and brand culture is key for those looking to run a franchised Woody’s unit.

While there is room for slight personal variation between stores, the brand is looking for a network of restaurants that share the same from-scratch tastes, large portions, and traditional feel. And the same goes for employees; while the locations on the docket for Woody’s upcoming strategy may not be sprawling cities or large suburbs, Williams says he isn’t worried about staffing the new openings. In fact, he says the team is actually looking forward to offering positions to members of their target customer demographic, a group that, according to Eastbourne’s data, places great value on Woody’s brand identity, affordability, and traditional menu.

The Eastbourne-Woody’s growth team doesn’t have a projected completion date or end unit goal for the Hometown Campaign. With hundreds of towns across the South that share the demographics and size of the top-performing locations, the brand is prepared to build in any small town that could use a Woody’s. “This is a long-term plan for our brand. We will create in every community that wants us. So whatever number that is, that's our goal,” Williams says.