Mac's is targeting the Southeast for growth.

Why COVID Will Propel Mac’s Speed Shop to New Heights

The barbecue brand's pandemic success has it set up to grow.

Company president Shang Skipper and Mac’s Speed Shop have had a chance to catch their breath. More than a year removed from dining-room closures and the COVID-19 chaos that followed, the pandemic cleared perspective for the barbecue concept.

“I’ll be frank,” says Skipper, a former VP of operations at Del Frisco’s Restaurant Group who joined the brand in January 2020. “The pandemic, in some ways, helped Mac’s.”

This is something Darden CEO Gene Lee referenced back in June. Amid the intrepid challenges and stream of setbacks, Lee called 2020 the chance “a lot of us had been waiting for.”

At Mac’s, an eight-unit barbecue brand out of Charlotte, North Carolina, which also oversees SouthBound, The Backstage Lounge, and The Music Yard, there were things that needed to change. Ahead of new unit growth, introspection was on deck.

“What have we done really well for the last 15 years? What do we need to do better? [COVID] really gave us a time to do a bit of a reset,” Skipper says.

“You never get that chance in life, really,” he adds. “And this is one of those times where we got that chance to do so.”

Skipper most recently served as multiconcept brand leader for LMR LLC, a hospitality management company based in Raleigh. He was about two months on the job at Mac’s when the pandemic arrived.

But the brand heard rumblings before. One of the early day tasks for Skipper was to look at Mac’s to-go operations. The chain, started famously in a former transmission shop, didn’t have a solid model. And truthfully, it probably didn’t need to just yet.

While barbecue is one of those categories that travels better than most, and definitely doesn’t shy away from bulk, Mac’s is an ambiance-driven concept that’s as much about beer and live music as it is food. Simply, people had more than one reason to show up to eat.

Mac’s hadn’t partnered with a delivery platform. So it’s something Skipper was working on before COVID. “But the more we heard about coronavirus, the more we started to realize as an organization, hey, we’re going to need to move faster on this,” he says.

It fell into the so-labeled “tablet hell” camp. To-go orders flowed in, with a server or bartender plugging them into the system before they shot off to the kitchen.

For delivery, a notification popped up on a tablet, and somebody rang it into the system.

Naturally, efficiency concerns were going to flare up in a world without dine-in business.

In seven days, Mac’s identified and linked with multiple aggregators. Within a month, it rolled a new point-of-sale system (Toast) that erased the holes in off-premises execution. The brand partnered with a third-party tech company to keep servers from ringing in delivery orders as well.

Getting the word out to guests happened quickly, Skipper says. Since Mac’s was new to the third-party space, it was able to leverage incentives as a fresh client to climb the list. It made sure guests, through social, web carousels, and pop-ups, got the message. And Mac’s just launched a new website in February. If you pull it up now, the first prompt is to start an online order.

Perhaps more importantly, though, people were already looking for Mac’s. “They knew they wanted us,” Skipper says. “So there was a little bit of a natural inclination once we were on those platforms. Oh, I can order from Mac’s now? That’s definitely where I’m going.” 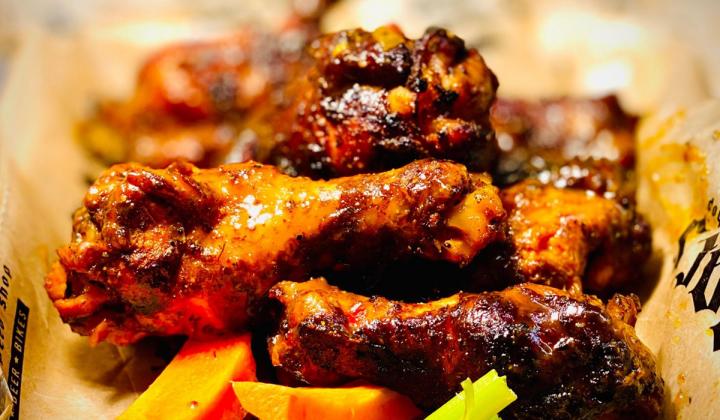 Ecommerce and marketing platform BentoBox recently released its first “Restaurant Delivery Consumer Trend Report,” something it plans to do quarterly throughout the year.

The Q1 survey found nearly one in two diners cited a desire to support local eateries as a factor in continuing delivery and takeout habits. This trend was even more prominent among heavy delivery/takeout consumers (ordering five times-plus per week, 61 percent), the most likely to continue ordering to support local restaurants.

And also vividly, nearly one in two (48 percent) said they would order directly from restaurants “if it’s easy.”

In an earlier study from the National Restaurant Association, nearly two-thirds of current delivery customers noted they prefer to order directly from the restaurant.

Of course, there are multiple factors at work, from price to increased awareness to brand versus app familiarity.

But one thing that does seem certain is there’s been a shift in preference dynamics. Pre-virus, there was a prevailing sense aggregator customers were product, not brand loyal. They wanted a burger, for instance, more than they wanted to eat at Mac’s.

Yet once dine-in left the equation, consumers flocked to comfortable options and sought restaurants they missed or trusted. And they began, to Skipper’s point, to look for their go-tos in places they hadn’t before. The only spots they could—delivery and takeout.

It was up to Mac's to make sure, for one, it was available in these channels. And secondly, to tighten operations so an off-premises flood wouldn’t overwhelm the brand and lead to poor service.

Before, Skipper had to make one of the toughest calls of his career. The company laid off about 450 people. Skipper says it was the right move because it allowed people to go after unemployment benefits. It also kept Mac’s from burning through cash.

However, the chain’s to-go business surged so quickly it was able to return 100 people out of the gate.

Mac’s forecasted if it could do 60 percent of prior business it would survive, or break even. “But we were doing 80 percent of our original volume in to-go in the beginning,” Skipper says. “It was like nothing we had ever seen. And our peers were saying, 'how are you doing this?' Again, I just have to go back to the established brand. People trusted the brand.”

Mac’s invested in better to-go packaging and ensured seals were put on bags at the restaurant, in case something went awry along the delivery path. It also put different employees on to conduct quality checks on orders as they went out.

Like many chains, Mac’s then crafted family packages and even launched a “Take a Pound, Freeze a Pound” promotion that coincided with grocery stores starting to feel the impact of limited products on their shelves.

Guests ordered pounds of meat at a time. This allowed people to bridge grocery trips during a stretch when leaving the house felt like walking into a hazard zone.

Skipper says Mac’s also recognized the importance of giving back to the same community that supported it. From local schools to Second Harvest Food Bank to the Isabella Santos Foundation for children with cancer, it launched the “Mac’s Give Back Program,” with out-of-pocket financial support, plus donations from local companies. 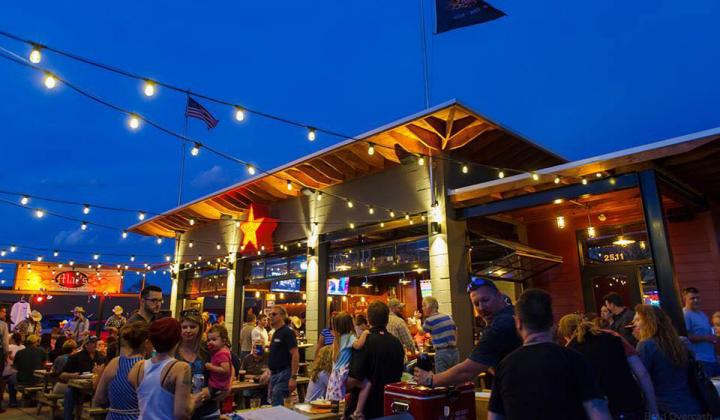 “We want people to know who we are and that we’re ready to grow,” Skipper says. “And were so appreciative of our communities. What they’ve done for us through this pandemic has really been remarkable.”

Mac’s offered customers a chance to help as well. The company created food packages guests could pay for and donate to frontline workers or any other group that needed assistance or was food poor.

They selected where they wanted meals to go, and Mac’s delivered them.

The logistics involved got complicated. Nearby hospitals were strict on how food needed to be delivered and handed-off. Meals had to be individually packaged for each to-go box and then packaged again inside large container packages. This way, individual packages wouldn’t touch anyone’s hands or the ground during transport. Then, since delivery teams weren’t allowed into the facilities and secondary barrier boxes couldn’t be carried inside, workers at healthcare facilities would come out, remove each meal by hand, and put them on carts to take inside.

Despite all this, Mac’s fed some 10,000 people through the initiative, Skipper says.

“I still believe that people knowing that we were giving back to a community in need has also helped propel us to where we are right now,” he says.

And where is Mac’s today? The brand actually has more employees than before the pandemic hit, despite capacity limits still restricting dine-in service in most stores. Mac’s had about 500 pre-virus and is closer to 550 today, with Skipper expecting more hires in the coming weeks and months. “Most locations” are outperforming last year, thanks to the elevated digital business.

Skipper says he doesn’t think that’s going away anytime soon. Returning to the BentoBox study, despite more restaurants reopening and warmer weather returning, nearly eight in 10 (79 percent) current delivery/takeout customers said they would continue to order at the same frequency they do now.

It’s inspired Mac’s to think about dedicated to-go areas. Each restaurant today currently has one, with signage up and reserved parking spaces. And typically, units have side doors where Mac’s can run the food out.

But with future design, Skipper says, the concept of a dedicated to-go spot where Mac’s can execute at a much higher level is definitely on the table.

“Do we have a to-go window even. It doesn’t necessarily fit our brand, but could it?” he says.

Mac’s evaluated outdoor seating across the footprint, too. The South Boulevard location in Charlotte was able to expand with an additional patio that tossed 12 extra tables into the mix.

Inside, COVID allowed Mac’s to reexamine things like its beer selection (does it need 365 selections for every location?) Technology. Menu evolution and development.

And all of this has Mac’s in its best financial position ever, the company said, with growth on the horizon.

Given Mac’s diverse barbecue menu—it does everything from “kick ass brisket” to Kansas City to every corner of North Carolina—Skipper believes the brand, “which is so much more than just North Carolina barbecue,” can succeed and tailor its experience to any market it lands in.

Again, this goes back to the 360-degree experience as well.

Yet just speaking about barbecue, Mac’s took first place for its house-made sauce and second place in the Whole Hog competition at the Memphis in May World Championship Barbecue Cooking Contest. In addition to first-place regional awards across the Southeast, Mac’s holds the Reserve Champion Whole Hog award for the Beer, Bourbon & BBQ Festival.

Mac’s is aggressively looking at Florida and the Southeast, Skipper says. It has boots on the ground scoping out possibilities.

“We want people to know who we are and that we’re ready to grow,” Skipper says. “And were so appreciative of our communities. What they’ve done for us through this pandemic has really been remarkable.”