At some legacy brands, the food hasn’t been the hero, says Walk-On's president Scott Taylor.

The sports-bar franchise plans to hit 150 locations in the next few years.

For many sports bars and casual-dining restaurants, the name of the game has been to slow down, cut back locations, and eliminate weak performers. And then there’s Walk-On’s Bistreaux & Bar, a Baton Rouge, Louisiana-based sports bar franchise that been expanding at a rapid-fire pace, not scaling back.

With 32 locations, the brand’s revenue spiked a whopping 56 percent last year. Moreover, it signed deals to augment that number by 30 in the near future and has its sights set on adding 150 stores across 15 states in the next few years. The key to its ascent has been its franchising expertise and management training programs, the company says.

In fact, each Walk-On’s location averages an annual revenue of $5.1 million, a healthy take for an individual sports bar.

Of its 32 eateries, 27 are franchised and five are company-owned. It’s currently located in six states, including Louisiana, Texas, Alabama, Mississippi, North Carolina, and Florida.

In 2020 alone, Walk-On’s is primed to open 22 new franchises, enabling it to surpass 50 outlets by the year’s end.

But expanding at such a rapid pace has its traps, which many restaurant chains have succumbed to. Walk-On’s must prove that it can develop management talent to keep pace with its accelerated expansion.

Brandon Landry launched Walk-On’s Bistreaux & Bar in 2003 in Baton Rouge near LSU’s Tiger Stadium, and named it for the fact that he was a walk-on player for the school’s basketball team. That meant the star players were on scholarship, and Landry had to scramble and hustle to stay on the team.

He used that metaphor, working hard and staying on course as a walk-on and putting the team first, as a theme to run his sports bar. 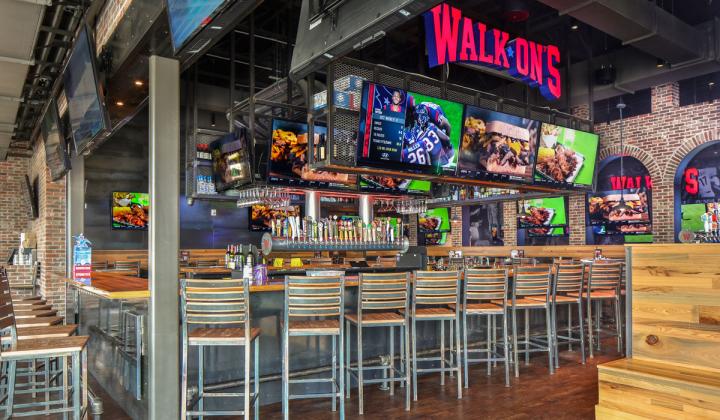 The sports-bar space might be a crowded one in full service, but there's still room for innovative brands to emerge.

When New Orleans Saints quarterback Drew Brees, a Purdue University scholarship athlete, dined there and loved it, he contacted Landry, invested in it, and joined Walk-On’s as a partner. The NFL’s all-time passing yards leader makes occasional promotional appearances when time permits.

In a previous interview, Landry said, “We’ve broken the mold of being a traditional sports bar. Our guests are coming in to eat first.”

Asked whether Walk-On’s plans are too ambitious, Joe Caruso, partner in Franchise Info, a franchising consulting firm, replied, “It’s a blend of aspiration and reality.” But he pointed out, in the last three years, it has generated steady, moderate growth, adding three outlets, then six, and then eight restaurants annually.

But when chains publish reports of opening 30 locations soon and 150 in the next few years, Caruso becomes skeptical. “Franchises love to put out numbers that are exciting to make it sound like an attractive investment to get more franchisees,” he says. Often they don’t live up to expectations.

Caruso also notes that the sports bar segment is a very “crowded space” that includes growing chains such as Twin Peaks and Arooga’s Grille House & Sports Bar. The good thing about Walk-On’s is their volumes are higher than the $4 million average store rate of many of its competitors, he says.

In order to grow at a pace of 30 new locations in a year, Walk-On’s would require “talent and capital.  You need someone who understands casual dining and the sports bar business at a unit level and someone with financial experience to help with development and securing the right locations at the right cost,” Caruso says

Despite Walk-On’s creating a career development plan for its employees, Caruso says, it will only succeed for about the first three locations before the talent base thins out. Hence it could hire a savvy vice president of operations who knows how to recruit the right management talent and sustain the pipeline. If not, problems arise when restaurant management can’t sustain the growth, he says. 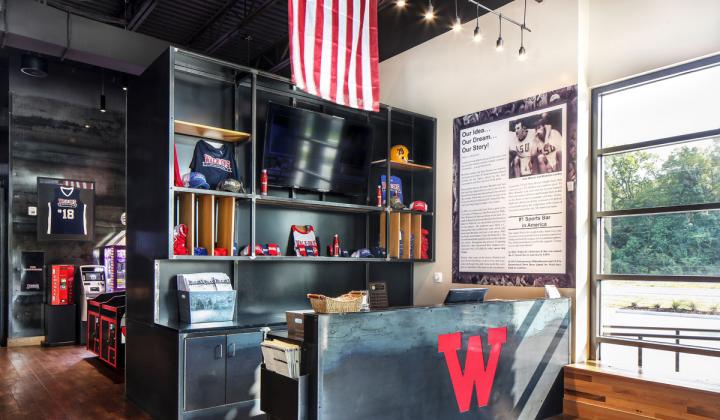 Walk-On's revenue derives from about 60 percent food and 40 percent beverages.

So far, Caruso describes Walk-On’s as a success story, particularly in its ability to attract millennials.  “They’re taking advantage of the Applebee’s effect because many are tired and consumers are looking for something new. They want something that’s hip, new, and speaks to them,” he says.

Caruso says the chain could benefit from locating new outlets in “contiguous markets, where they have operating efficiency, and which helps the supply chain.”

Scott Taylor, the Baton Rouge, Louisiana president of Walk-On’s Bistreaux & Bar, attributes the chain’s success to its competitive edge compared to many of its rivals.  Many of the casual-dining chains, he says, operate in a “sea of sameness. They’re so close to their competitors that they can’t differentiate themselves.”

On the other hand, he described Walk-On’s as a “restaurant first, more than a sports bar, a scratch kitchen, with a taste of Louisiana in our food, culture and offerings.”

Unlike most sports bars that cater to men, Walk-On’s on a typical day attracts “women, families, guys drinking at the bar and seniors, with a 50/50 split between men and women,” Taylor says. Additionally, its revenue derives from about 60 percent food and 40 percent beverages whereas most sports bar average 75 percent beverage, he says.

While many insiders view having franchisees as running a restaurant as giving up control, Taylor turns it into a positive. “The franchisees are out there, in the restaurant every day, to make it successful.” He calls them “entrepreneurs who work within the system and standards,” not outside it.

Walk-On’s also offers additional support beyond what some franchisors do. Its regional managers oversee no more than 10 locations at a time and are supported by a regional culinary manager and marketing manager who visit units twice a month to offer support.

The company uses its Bluechip program as a way to reward talented staff. “We overstaff our restaurant with management and team members, knowing a franchisee may need help. It’s a win/win for us and them,” Taylor says.

Millennials are attracted to Walk-On’s, Taylor says, mostly by the distinctive food. “They like flavorful, innovative food. At some legacy brands, the food hasn’t been the hero,” he says.

Walk-On’s offers millennials experiences beyond just dining, too. “They’re looking for fun stuff to do when eating. They can be on social media, watch a game on TV, more than just eating a meal,” Taylor says.

Taylor contends that Walk-On’s has the potential to work “in every community across the country.  Sports play well with all demographics. We’re growing at a good pace and will continue to be a dominant player in the market.”