The restaurant uses steam kettles to spice foods to the level of each customer’s liking.

Owner Ron Lynch indicates the brand could reach 200 units in less than a decade.

Next year may be the start of a Cajun, Creole, and Caribbean-style brand rising to national relevance in a category ripe for penetration.

The story begins with VooDoo Daddy’s Steam Kitchen in Tempe, Arizona, which opened in April 2019. Founder Ron Lynch, who orchestrated the growth of Tilted Kilt and Schlotzsky's Deli, says the idea originated from his Air Force upbringing. His dad was stationed in such places as Biloxi and Shreveport, Louisiana, and he and his brother were raised on the local Cajun cuisine.

“My dad got out of the military and went to school on the GI Bill, which meant he was the cook, and my mom worked outside of the home while he went to school. One of his best things was red beans and rice,” Lynch recalls. “I had a passion for this.”

As he was developing restaurants across the country, he noticed a lack of moderately priced food in the Cajun category and few national players. He hooked up with chefs Mike Bukowski and Tim Doolittle—who Lynch describes as an Emeril Lagasse acolyte— to establish the menu.

Nearly a year and a half (and one global pandemic) later, a second location is already in the works for Seguin, Texas. The new store will be led by Angela and George Green, and Christine and John Verhelst, and will open sometime in Q1 of 2021.

VooDoo Daddy’s second unit will be based in Seguin Town Square in a 1920s-era hotel that imitates the atmosphere of New Orleans.

“They’re building out right now,” Lynch says. “So as soon as they get a vaccine or as soon as people get comfortable getting out again, they’ll probably open.”

VooDoo Daddy’s, which operates with an open kitchen, offers New Orleans favorites like jambalaya, gumbo and pan roasts, red beans and rice, and po’boys. The restaurant uses steam kettles to spice foods to the level of each customer’s liking. The concept sells craft cocktails like the VooDoo Doll—a concoction made with pineapple vodka, pomegranate liquor, pineapple juice, and pomegranate syrup, topped with a pineapple wedge.

The decor includes a 25-foot long mural that displays piano keys and jazz players, which sets the color palette for the entire restaurant. Additionally, VooDoo Daddy’s hosts live music on Fridays and Saturdays.

Lynch says the restaurant saw a nice jump in November, December, and January, and began to establish its name. Then COVID hit in March, and VooDoo Daddy’s was forced to adapt quickly via third-party delivery and curbside pickup. Sales are now roughly 65 percent of what they were pre-COVID. 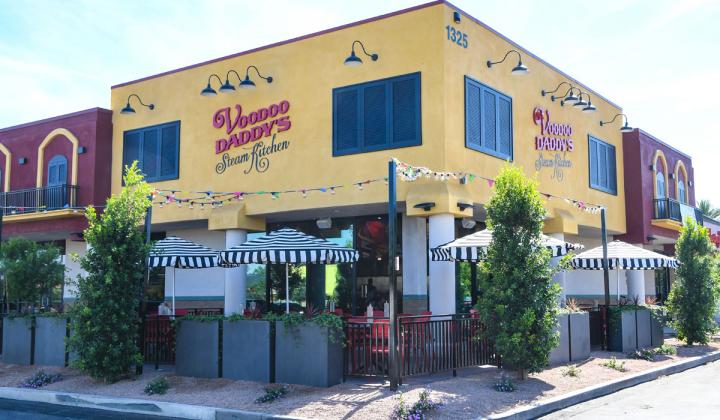 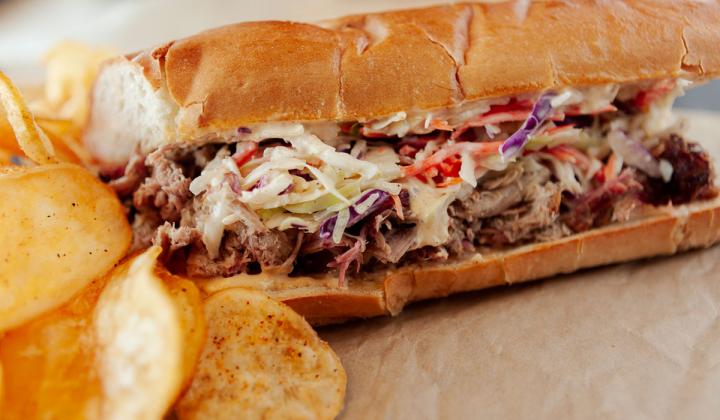 VooDoo Daddy’s Steam Kitchen aims to have five restaurants open by the end of 2021.

Although it’s a young brand, expansion is a subject in which Lynch is quite familiar. Fourteen years ago, he acquired the rights to Tilted Kilt and grew it from one spot outside of Las Vegas to more than 100 units in the U.S. and Canada before he left. He also opened more than 100 franchised Schlotzsky’s Delis in several states.

Lynch says the Seguin agreement started when an insurance writer he worked with at Tilted Kilt came to try VooDoo Daddy’s. The former coworker returned to Texas and informed acquaintances who wanted to start a restaurant. They came to Arizona and fell in love with the food and design and wanted to secure the rights for their area, Lynch says.

Even though the first franchised location came without sophisticated solicitation, that’s not to say Lynch isn’t prepared for more growth.

He has an FDD and is prepared to lift VooDoo Daddy’s similar to what he did with Tilted Kilt and Schlotzsky’s. The process just cooled once COVID hit.

He’s talking to a group out of San Diego that wants to take advantage of favorable real estate. There’s also another group in Wiley, Texas, a suburb of Dallas, that’s shown interest.

Lynch aims to have five restaurants open by the end of 2021.

“I’m saying that with some hesitation because none of us really knows what’s going to happen when they have the vaccine, which we all hope is around by the end of the year,” Lynch says. “And we really don’t know what the confidence of people is going to be in that vaccine for a while. So we don’t know for sure how quickly they’ll get back, but I’m ready to move forward. I’m confident that there’s going to be a little bit of a pantry fatigue. People are tired of staying home and preparing their meals themselves. I think as soon as they get the slightest comfort, they’ll be out, and I want to be ready for them.”

While the COVID pandemic hasn’t presented many advantages, it has provided a clear picture of where the restaurant industry is headed, particularly with off-premises. And as VooDoo Daddy’s grows, Lynch will use learnings from the crisis to build future stores appropriately.

He’s primarily interested in installing pickup windows and ensuring the parking lot is designed for them. Lynch believes that type of convenience will be desired not only for safety reasons, but also because of the heat. He explains that in Tempe, temperatures get so unbearable that sometimes people don’t want to leave their cars to go inside to the pickup area.

“I think pickup and takeout is going to be stronger than it was pre-COVID, so I want to prepare for that,” Lynch says. “… We can’t prepare quick enough for a drive-thru, but pickup would be great. They can pull up to it, and they wouldn’t have to get out of the car.”

His team is putting the finishing touches on a new website that will have all the relevant franchising information. Lynch will then give the go-ahead to his contacts in the brokerage world to pass along leads for potential franchisees.

All of the pieces for VooDoo Daddy’s expansion strategy are coming into place. The industry veteran believes there’s so much room to grow in the Cajun segment that he will be disappointed if VooDoo Daddy’s fails to reach 200 restaurants in six or seven years.

“I think that’s very possible,” Lynch says. “Our mission statement is to be the best, most respected cajun Creole Caribbean restaurant in the country, and that comes with recognition. They have to recognize the name.”