On one platform, guests are able to choose among the concepts.

Local restaurants are preparing five brands under one roof.

Concept Entertainment Group executives John Plew and Keith Castro considered the idea of an online food hall before the pandemic. But like most of the industry, COVID-19 forced theoretical considerations to become actual strategies.

CEG is mostly known for its Thirsty Lion Gastropub & Grill stores across Arizona, Texas, Oregon, and Colorado. But the online food hall owes its beginning to CEG’s other concept, Grand Central Restaurant Bowling Lounge, in downtown Portland. Trader Joe’s approached the restaurateurs—who own the building—about becoming a possible tenant, yet it wanted to gut the bowling operation, which would’ve left CEG with the kitchen.

That’s when the wheels began to turn.

“So at that point, Keith and I were like, well, gosh, we've got mountains of dollars in this infrastructure and this kitchen, wouldn't it be great to be able to really beta test the full-on pick-up/delivery concept, for a very reasonable cost, because we already had the investment there, and it was small,” recalls Plew, CEG’s CEO.

Thirsty Lion was originally incubated in Portland. However, the company divested out of the location four years ago. Plew and Castro knew there was still demand for Thirsty Lion food, but they didn’t want to build a full-service restaurant in the downtown area, especially considering COVID’s effects on urban-based restaurants.

In the fall, Grand Central Restaurant Bowling Lounge was rebranded as Central Bowl, Arcade, and Food Hall. Inside that space, CEG launched online food hall Central Kitchen, which serves Thirsty Lion and multiple virtual concepts across a variety of cuisines. In the months following, Central Kitchen expanded from the downtown Portland location to Thirsty Lion kitchens.

"We had to get really creative and figure something out,” Plew says. “So we just put our hats back on and started creating what we felt was doable within our current kitchen designs of Thirsty Lion. But we'll use the Grand Central as our test kitchen and way to figure it out.”

Castro says development of these new brands required high level questioning, such as determining what resonates with guests, what demographics are being sought after, and who’s doing the bulk of online ordering.

“We began by defining okay, what are the most popular things in that,” says Castro, CEG’s vice president of food and beverage and executive chef. “You can't have a full-blown menu, but you got to have the most popular items within that culinary genre. And so we began to whittle that down and then create food from that based on the equipment that we had. We also remodeled the kitchen a little bit, brought in some other equipment that would support these items, and then just really went after 200 really different plates of food and then started narrowing it down. Then we began to define the recipes and to define the process, which is very intricate. We were very methodical about that.”

The rollout was possible only after Thirsty Lion reopened and stabilized its restaurants following the decision to lay off 1,200 workers in March. The brand reopened one unit in Phoenix in May with Plew, Castro, and a few other key members all learning how to integrate pickup and delivery into the system.

“So the first day we did it and we marketed it like you're opening a restaurant, all of a sudden, all of our screens started lighting up,” Plew says. “And you're like hearing this ding ding and everybody starts cooking food and you turn around and there's nobody in this 6,500 square foot restaurant. You’re going, ‘Wait a minute. What's going on here?’ So it was so unnatural to go and do $2,000 worth of food and there's nobody in your restaurant. I mean, it was very strange, but that was just the Thirsty Lion.” 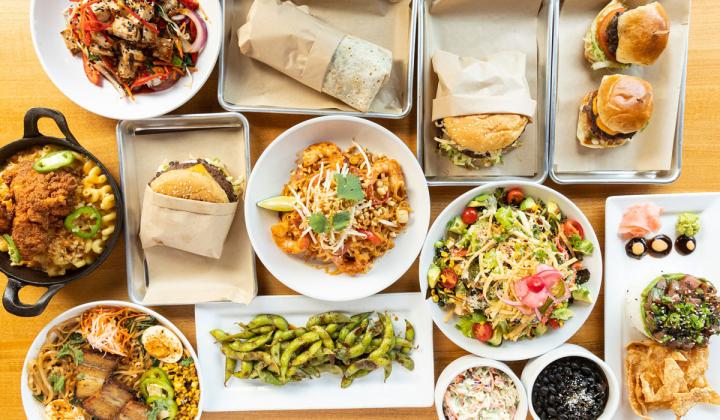 The jury is still out on what will become of the virtual concepts once restaurants return to 100 percent seating.

Once the virtual concepts were fully curated, they were intertwined with one Thirsty Lion kitchen after the other. As Castro explains, the most important part of managing five brands under one roof is being able to see it, understand it, and produce the food. To improve speed and accuracy, Thirsty Lion uses Chowly to transmit third-party delivery orders directly into the kitchen.

Every order that comes through is timed so that items—no matter the cooking procedure—are bagged at the same time and sent to either a delivery driver or customer. For example, if a guest orders a fried chicken dish that takes 12 minutes and an ahi poke bowl that requires four minutes, the back of the house will see the fried chicken meal first. They won’t see the poke bowl until it gets down to four minutes.

To further reduce complexity, the back of the house also shares ingredients among the brands.

“That’s one of the things that you have to really be careful of, otherwise you get ingredients all over the place, and then the stuff starts dying if you can't move fast enough,” Plew says. “And that was another thing that we did probably two or three weeks into this thing. We looked at data every day. We determine what's moving, what's not moving, where we're wasting all those things, and we started trimming those things off the menu before they ever got to the Thirsty Lion brand. So what we've gotten for Thirsty Lion is a really efficient brand that doesn't create a lot of waste. That's really important for us.”

After food preparation, the next concern was packaging. Castro notes when operators normally develop food, restaurants create a beautiful plate presentation so that people eat with their eyes. The main objective was to accomplish that feat, but inside a box. Castro says the team pored over hundreds of choices; the group wanted sustainable packaging, so that narrowed the field. The process included questions like “What does food look like in a box?” and “How does it travel?” The brand initiated some testing and continued to refine until it reached a complete package. Then it proceeded to add the proper logos and stickers to the bag, which is a whole other layer.

“The end result is people really like having the option,” Castro says. “Everybody wants something different. But if you could get it all in the same bag and pay for it on one bill, that's a pretty good deal, right? That's where we went with that.”

In terms of marketing, Plew says Thirsty Lion wanted to make sure integration ran smoothly before potentially opening the floodgates and crashing the system, so promotions were gentle on the front end. Eventually, the brand leveraged third-party platforms to advertise introductory-type specials to build trust with consumers.

The restaurant also cross-promoted the virtual concepts with its customer database, which includes roughly 100,000 loyalty members. Other strategies include driving customers back to Central Kitchen in each to-go bag, establishing public relations in each market, calling on 15 to 20 food blog influencers to spread the word, and sending direct mail to local communities.

“So it is really like launching a whole new food hall,” Plew says. “We would take the same marketing steps and leverage those assets—Instagram and Facebook, emails and texts, and flyers and PR—very pretty much like what we would do with the regular restaurant.”

The jury is still out on what will become of the virtual concepts once restaurants return to 100 percent seating. Central Kitchen began for two reasons—to take advantage of the kitchen space in downtown Portland and to form a bridge to the post-COVID world. But Plew says that within that journey, Thirsty Lion appears to have struck gold.

Do you keep them? Do you turn some of them off? Plew did note there’s a space next to the downtown Denver store that used to be a small quick-service spot. So do you take those virtual concepts and pull them out of Thirsty Lion and operate in that space instead? And what about college and corporate campuses, food halls, airports, and other nontraditional areas?

The point is, there’s viability. Other virtual restaurants are on the way, including a Mediterranean concept, a health-conscious brand, and a coffee/breakfast burrito idea to capture the morning daypart. Even beyond that, one of these plans may even transform into a secondary storefront brand behind Thirsty Lion.

Through necessity, Plew and Castro stumbled upon greatness.

“It was a lot of hours,” Castro says. “We tried a lot of food. I would cook all day long and John would eat and we spent an enormous amount of hours putting this thing together and beta testing it and blowing it out. But looking back, it’s almost miraculous to pull it together like that.”