Branch Line’s open kitchen is the centerpiece of its historic location, a space that was once one of the largest Army arsenals in the U.S.

Often an afterthought on fine-dining menus, classic rotisserie-cooked chicken is bringing in the crowds at Branch Line.

At Branch Line, guests can peer into the open kitchen and watch whole chickens turn on a spit, the flames kicking up. It’s a simple, time-tested approach, but one that feels as classic and refined as the historic setting itself. Located in what was once one of the largest U.S. Army arsenals in America, the Watertown, Massachusetts, restaurant has not only shifted chicken to the center of plate—the bird is also unquestionably taking center stage.

“The Rotisol represents a benchmark in rotisserie cooking,” says Andrew Holden, Branch Line’s managing partner and co-owner of the restaurant. “It’s a beautiful piece of equipment with tempered glass that has very even heat distribution.”

The restaurant also roasts chicken for a host of other dishes, including Lemon Chicken Soup with oregano, Greek olives, and big crusty croutons, and a Chopped Salad featuring chicken, avocado, and Feta.

Soon, Holden says, the Rotisol will be used for additional menu items such as potatoes, leg of lamb, cabbage, and fish.

The concept is part of the Watertown Arsenal, a historic series of distinguished buildings that dates to 1816.

“The Watertown Arsenal grew dramatically through the big world wars but it eventually evolved into a research center and was later sold in the early ’90s,” Holden says. “There is a long-term vision for the complex by its developers—one where the community is a big part of it.”

“We keep the food simple with bold flavors, but not too many components on the plate,” Holden says.

Branch Line, open Monday through Saturday, has lunch tickets that average $18 while dinners come in around $55. Moving forward, Holden says, it’s likely the restaurant will also open on Sundays.

Branch Line’s interior is warm and welcoming with high ceilings, wood floors, marbled accents, and a decorative back bar. “It feels very comfortable and is bright during the day because of the huge windows. At night, the lights are low, and it’s a very sexy room,” Holden says.

“The uniforms hit just that right note of energy and spirit but also class and professionalism,” he explains.

Branch Line also showcases a finely honed draft beer list featuring about 20 varieties. “These were meant to be consumed right after they are brewed,” says Holden. Beer accounts for 12 percent of sales. 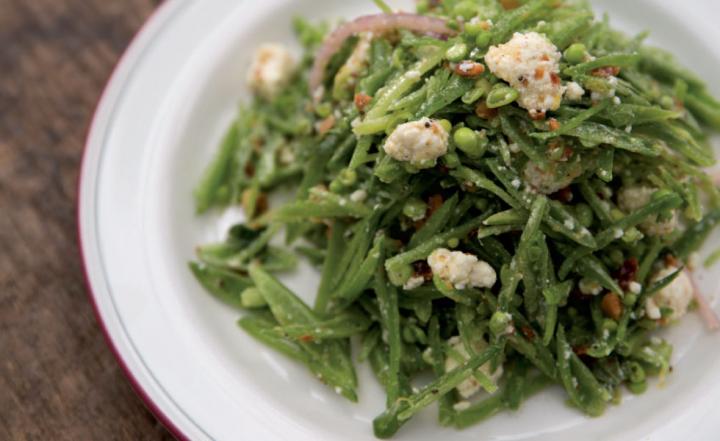 There is an equal amount of art and precision that goes into the tightly focused wine program, featuring Mediterranean wines. Wines by the glass range from $9 to $14, while bottles sell for between $35 and $140. Wine sales account for 23 percent of sales.

“These wines are old to the world, but new to us,” Holden notes.

While Holden and Harker didn’t expect many private parties when the restaurant opened in October 2015, the bookings have proved otherwise. “It didn’t feel like a private-party type venue, but there has been a huge demand,” Holden says. “We have had buyouts of the bocce court as well as the enclosed patio. We never thought this would happen.”

With its strong response from neighbors, Branch Line is ahead of projections for the first year, and its tables turn up to four times nightly.

“The reception has been extremely positive,” Holden says. “It’s hard to imagine how it could have been better.”

“Make sure you have fun every day at work,” he continues, referring to the lessons he’s learned over the course of the year. “As a manager you have to be positive, a bit of a morale booster. Let the staff contribute, and ask them for ideas. You will always come up with better results when you listen.”