Nobis will also have a boutique hotel next door.

The former CEO of Punch Bowl Social is ready to reenter the eatertainment segment. But that's hardly the full story.

Regardless of where the COVID-19 closure figure settles, there is one indisputable point. The vast majority of vacant restaurants will eventually backfill with new ones. Darden has brought this up before—the notion of “once a restaurant, always a restaurant.” Generally, it is more desirable and cost-effective for operators and landlords to take that angle.

Now, imagine the conversation for a 25,000-square-foot eatertainment box.

Given consumers’ preference for crowd avoidance and contactless options, the socially driven segment has taken an especially fierce COVID blow. And it will witness substantial closures before the dust clears.

When Robert Thompson resigned as CEO from Punch Bowl Social in August—a brand he created eight years ago out of a former Big Lots—he tried to distance himself from the category. He founded an incubator platform out of Denver called Thompson Growth Group and unveiled three fresh brands: growth-ready Dinette Fine Foods, which he likened to an “urban Waffle House;” upscale experiential Fiona, complete with a flower and coffee shop; and Nobis, an ambitious 45,000-square foot, multi-faceted concept that already has a location in the works (more on this shortly).

But eventually he couldn’t resist the familiar lure. Over the last couple of months, investors and landlords reached out to Thompson about taking over second-generation eatertainment spaces. “So I have decided to go ahead and develop another brand,” he says in an interview with FSR.

Thompson isn’t ready to divulge details just yet, but his reputation points to some bankable expectations. “I’m going to develop something that’s differentiated,” he says. “I’m not going to put out something that’s bland and in the middle with everyone else.”

Expect it to be design forward. Scratch kitchen oriented. Craft beverage focused. Sound familiar? Punch Bowl’s differentiated nature was one of the key tenets in Cracker Barrel’s decision to spend $89 million for an initial non-controlling stake, with the promise of providing upward of $140 million to fuel growth. COVID collapsed the deal and led to Cracker Barrel absorbing a $133 million hit to cut ties with Punch Bowl, known for its shuffleboard, ping-pong, bowling, pinball, and Skee-Ball.

Going back, however, the best example of Punch Bowl’s unique nature in the category, as it scaled to 18 locations in less than a decade, was the fact nearly 90 percent of its revenue stemmed from food and beverage. It once engaged “Top Chef” judge Hugh Acheson to curate menus before he left to focus on other commitments. Ahead of COVID, the chain reported targeted average-unit volumes in the $7 million to $8 million range, with new unit store level EBITDA excluding pre-opening of 17 percent or higher. Cracker Barrel said last September it saw potential for 100-plus domestic locations.

For perspective on the F&B mix, Dave & Buster’s amusements accounted for close to 60 percent of the company’s total revenues in a pre-virus world.

Thompson says his new concept will separate from Punch Bowl is one clear direction—instead of catering to millennials, it will lean more into developing the Gen Z psychographic.

“Many people don’t really know how to dissect the nuances between Gen Z and millennials,” he says. “And they’re not violent sort of differentiation points. But there’s enough nuance to this psychographic and the way they look at brands and what they expect from brands that, for me, I will use them as my muse.”

There’s no question opportunity will be present. As Thompson points out, the cost of repurposing a 25,000-square-foot eatertainment box would be “extraordinary” for the landlord. It’s exactly why they’re calling him and asking to backfill. The other reason, naturally, is his history. “I have the credibility for them to call and say, ‘hey, look, we know it’s a sweetheart deal so if we’re going to gift this to someone, we’re going to give it to someone who actually knows what they’re doing,” Thompson says. “It’s created an opportunity for us.”

It costs roughly $6 million to develop a 25,000-square-foot concept, he adds. But you can get open and rebrand in a conversion for a fraction of that. “And that’s where the investor’s angle came in,” Thompson says. “With me, they were saying, geez, you’ve got to take advantage of the opportunities that are being presented.”

Unsurprisingly, this isn’t the only scheme Thompson has cooking. In addition to the eatertainment landscape, there’s another opportunistic hole surfacing. Casual-dining chains, especially in recent years, have drifted toward 4,500–5,000-square-foot spaces. And high-capacity dining rooms are only on the decline in a COVID dynamic. It’s why hordes of quick-service brands are concepting drive-thru only models, or shrinking dining rooms in favor of off-premises potential.

What Thompson noticed was an abundance of vacant 8,000-square-foot restaurants dotting the map. One example being Brio Tuscan Grilles, part of the FoodFirst Global (Bravo Cucina Italiana is the other brand) group that declared bankruptcy in April. The concepts sold to Earl Enterprises—parent of Planet Hollywood, Buca di Beppo, Bertucci’s, Earl of Sandwich, and Chicken Guy!—for $30 million in June.

So Thompson began to think, why not develop a concept that flourishes in what most would consider a large-format restaurant? A brand that could, on day one, drop into the real estate left behind?

The answer was a concept Thompson is calling, “Mexican Chocolate.” He says they’re going to announce a deal “pretty soon.”

It was developed, as noted, to fill larger vacancies that might seem daunting to some. “If you know how to create concepts, and you understand consumers, this is really fertile ground right now,” he says. “If you look at the strategic angles and say, OK, there is 50 8,000 square-foot-boxes out there and how many do we want? The only way to take advantage of those and go fast is to create a single brand with one concept, one management team, one operating model and standard, and drop into as many deals as makes sense.”

Mexican Chocolate embodies Thompson’s DNA as a concept creator. He believes there’s opportunity in the segment. There are several national brands, but a lot, Thompson says, serve a product that is commodity. Mexican Chocolate will lean into desert and the heritage of Mexico, especially the prevalence of cocoa in cooking. 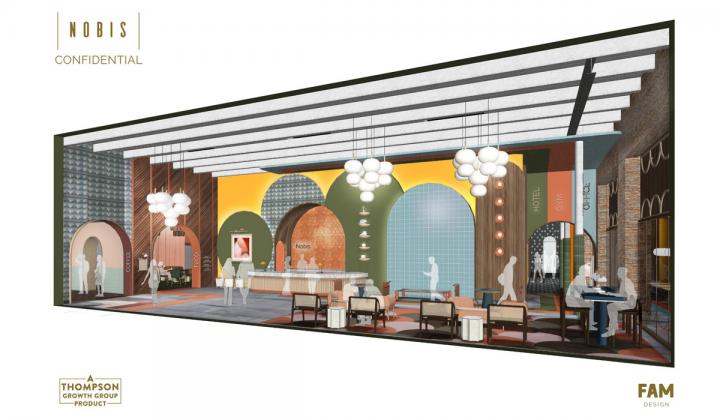 Nobis will begin its growth journey in the company's home base of Denver.

When Thompson outlined TGG’s plans in August, Nobis, which translates to “we” or “us” in Latin, was really the one with the most buzz behind it. Oriented toward millennials, the brand combined a health club, private restaurant, cocktail bar, and social space to create a “third-place” designed for a modern era.

At the time, Thompson said Nobis had more demand than it could handle. Akin to the eatertainment whitespace, developers were rushing to find an alluring concept that could not just flood massive spaces, but attract foot traffic back to complexes in the wake of COVID.

And now, Nobis has its first site locked in. The brand will spring to life in Denver’s Rhino District—one of the hottest development areas of the past six years.

It’s a 45,000-square-foot project that, as the rendering atop shows, features a pool component. Nobis will also eventually attach a boutique hotel on the connected parcel.

The concept is designed with a private and public component. One restaurant that welcomes walk-ins, one that doesn’t. And the rest of the features exclusive to members and hotel guests. So there will be a members-only craft cocktail bar, 10,000 square feet of fitness, and a dedicated work-space area for people who don’t want to sit at home forever.

Thompson calls it “a matrix of concepts.”

“People need a third place to go other than home. So if they’re only going to go to the office twice a week and they’re expected to work from home three days a week, we don’t think that’s what consumers want,” he says.

Thompson also thinks Nobis can commit some companies to provide a stipend for employees to join.

Regardless of what feature people flock to, though, whether it’s the gym, social element, or work setup, the idea would be offering adding value on top of whatever they’re targeting. And for the price of a high-end gym membership, Thompson says.

He expects the project, which is repurposing an old building, to take roughly 24 months. A Punch Bowl used to take 18.

Nobis will also open opportunities for members to host events and book private parties. Thompson particularly expects wedding events and parties to take advantage of the pool space and room blocks. On day one, there will be five hotel rooms facing the swimming pool.

To date, he says interest has been substantial. And while he’d like to perfect the concept before expanding, the construction timeline doesn’t really allow for it. In other terms, at best, they’d open two years or so apart. So now that the debut site was selection, Thompson says he’s open-minded to fielding conversations about future locations.

Despite everything that’s going on, “It’s a fun time to be a national restaurateur," he says.