Jon Taffer knew expectations would be high when he opened. And he's delivered.

To understand the formation of Taffer’s Tavern, “Bar Rescue” star Jon Taffer takes you back to life before the COVID pandemic.

He remembers a slim number of eligible workers, the push for $15 minimum wage, and language barriers with new Americans. At the time, Taffer believed the casual-dining model, as it existed, couldn’t survive without a viable labor pool.

“So I said, I'm going to see if I can create the casual-dining model of the future,” Taffer says. “And my goal was to establish a restaurant that had 60 percent lower back-of-the-house labor costs by using technology.”

Taffer proceeded to foster partnerships with dozens of companies to create the kitchen, bar, and food programs of the future. He worked in test kitchens for two years and focused on sous vide cooking as the approach. Through this method, he accomplished quality, consistency, and extended shelf life.

When that was combined with proper technology, Taffer ended up with a kitchen that had no stove, no hood, and no raw proteins. The cooking process requires no human contact, and cooking time is four to six minutes. He says the kitchen has one-third, if not 20 percent, of the counter space of a regular kitchen. And less space means a smaller chance of contamination. The bar includes a nitrous system that slams every glass with nitrous oxide to bring the temperature down to almost zero, killing any bacteria before the drink is made.

He took it to the next level by introducing the “Taffer Safe Dining System,” which added policies, procedures, hand-scanning technologies, and uniform and product handling requirements.

"I'm convinced I have the safest operation in America,” Taffer says.

Without much marketing, Taffer’s Tavern quietly tore the paper off the windows in late October and opened in Alpharetta, Georgia, a suburb of Atlanta. Since the beginning, the restaurant has been filled, Taffer says. The store is performing more than 200 percent over its COVID-19 revenue budget.

Taffer attributes early success to the foundation laid out two years ago. COVID changed the way Taffer’s Tavern designed policies and procedures—like the addition of PPE and compartments to isolate contaminants—but the kitchen, bar, and layout already ensured maximum safety.

“I found that as a restaurateur, if I implement the policies that really make employees feel safe, that really gets communicated to the customers,” Taffer says. “… Opening the restaurant with 80 employees during COVID was tough. We put people obviously in protective masks, etc. But we put them in pods and kept them isolated in pods and went about this in a really smart and strategic way. The employees really started to trust us and our systems for safety. And because of that, we were able to draw better employees. And I think if you make your employees safe, then your customers are inherently going to be safe.”

The development of the menu, which features Roast Beef Au Jus, 72-hour Short Rib, and Pot Roast Stroganoff, started with the premise of “what is a tavern?” Before settling on that name, Taffer’s team mulled a variety of monikers, such as “lounge,” “bar,” “cafe,” and, of course, “restaurant.” Taffer says they landed on “tavern” because it has an expectation of food, warmth, coziness, and predictability. The bricks, woods, finishes, and colors amplify those traits. Taffer hates using the term “comfort food” because it’s cliché, but if he’s being honest, that’s the type of cuisine Taffer’s Tavern provides. 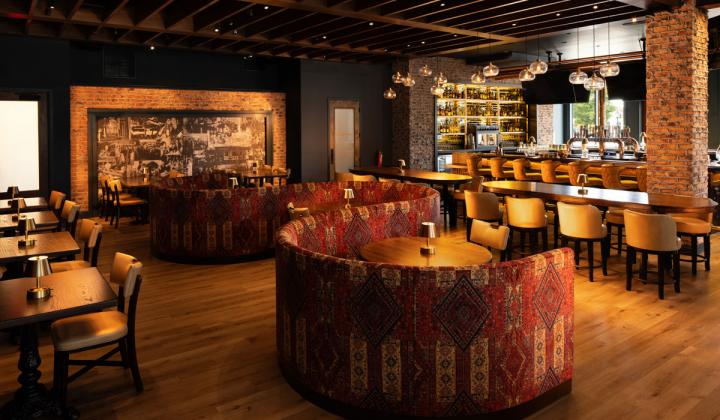 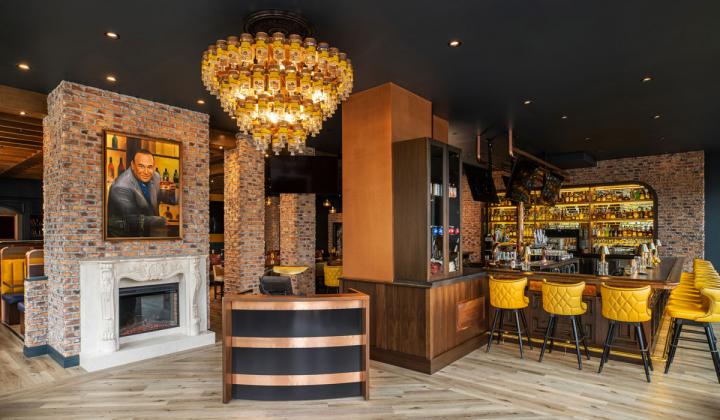 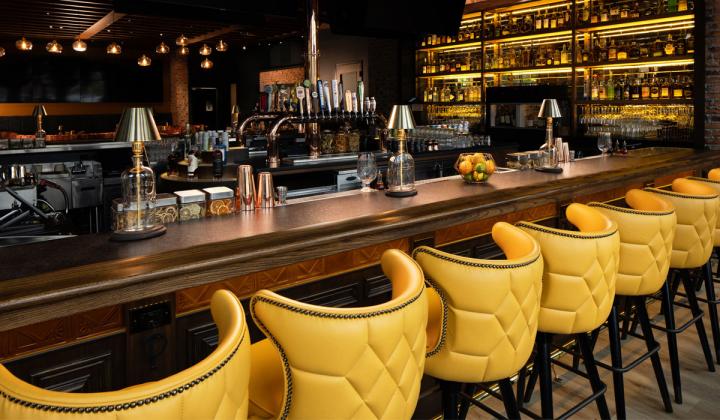 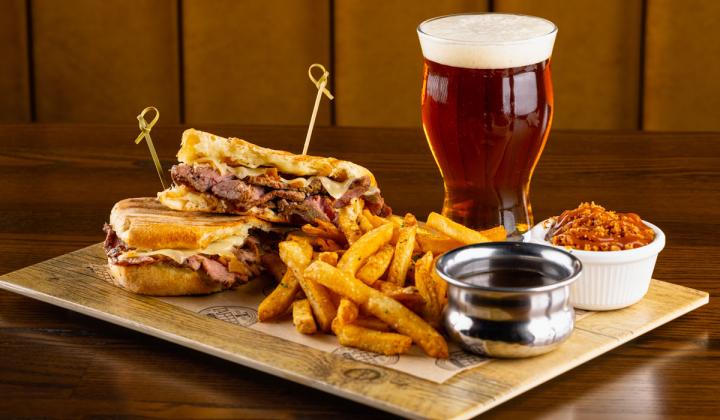 Why Tavern? It carries an expectation of food, warmth, coziness, and predictability.

However, it appears the beverage program—teeming with a collection of crafted cocktails, beers, and wines—deserves just as much of the spotlight, mixing 45 percent in the first few weeks. With a show named “Bar Rescue,” Taffer knew there’d be high expectations, so the bar was designed as such. Some of the cocktails are complex, so to eliminate extra pivots and wasted motion, Taffer’s Tavern worked with Krowne, a stainless-steel manufacturing company, to develop a flow in which the bartender doesn’t need to take a single step.

“So we call it a bartender cockpit,” Taffer says. “It’s sort of wraps around you. And you pivot from that central location. And there's no movement from side to side. Everything is right there. So working on this premise of a cockpit rather than a station and working with Krowne, we really effected unbelievable efficiency. So we're putting out more complex cocktails with more steps about as quickly as we put out a pretty basic cocktail.”

While Taffer welcomed innovation into his new restaurant, that doesn’t necessarily mean he is bullish on every trend in the industry, particularly ghost kitchens and virtual brands. He says he wouldn’t run to invest in those for Taffer’s Tavern, but he does note that digital kitchens may make sense for certain delivery areas where sit-down concepts don’t fit.

“I personally think that the ghost kitchen thing is going to be based upon branding expertise,” Taffer says. “And does a ghost kitchen have a branding advantage over freestanding branded restaurants with the exterior and a sign and market reputation and an address and all of that? I'm not sure. And I'm not sure I buy into a virtual brand premise. I also think that competing with the DoorDashes of the world is not going to be such an easy equation. So I'm one of the people in the industry who thinks that the ghost kitchen thing is a little over-exploited, over-energized, and doesn't necessarily hold water as it relates to the branding of a brick and mortar—driving by, it's been part of the community for years, has an in-person experienced neighborhood marketing program, a connection to a location. That stuff's not so easy to overcome.”

But that’s not to say Taffer’s Tavern isn’t in the off-premises game. The restaurant has a PUC system (Pickup Cabinets) in the back wall of the restaurant. For off-premises orders, the package is placed in a stall inside the kitchen. When the delivery driver or customer comes up to a specific cabinet, they scan it with their phone and the door pops open. The food never goes to the front of the house and workers never go outside.

"There is an opportunity for a real boom town in the restaurant business, if things move as the science suggests that it would," Taffer says.

When the COVID smoke clears, Taffer anticipates many restaurants will see off-premises account for roughly 25–30 percent of sales. That will certainly be higher than pre-COVID times, but also not at the levels seen by restaurants during the pandemic. Taffer predicts delivery will become extremely competitive, leading to much discounting and giveaways amid a noisy marketplace.

Taffer knows many restaurants have attempted to cut costs by investing in kiosks, tablets, and the off-premises channel, but he’s not a fan of sacrificing the front-of-house experience. To avoid this problem himself, Taffer’s Tavern produced savings in the back so it could spend more time focusing on the restaurant. He’s confident those entertainment dynamics will be a powerful growth vehicle.

“I caution those restaurants who think that their future lies in the delivery business post-COVID. If they keep cutting back the front-of-the-house experience, then their future will be in the delivery business,” Taffer says. “And when that business comes down 30 percent or 25 percent of industry revenue, they'll be gone. So I caution that part of the industry that is impersonalizing the front-of-the-house experience of their restaurants. And I'm of the belief that putting technology between us and a customer and a full-service environment is a major mistake. I believe that technology should be behind the employees, not in front of them.”

Taffer’s Tavern has 11 committed units that will follow the Alpharetta location—four in the Atlanta area, two in the Washington, D.C. market, and five around Boston. Roughly a half-dozen other territories are in talks currently.

According to Taffer, now is the time to make deals because of the negotiation power with landlords.

“It's an excellent time to realize that the pandemic is coming to a scientific end with the vaccine by May or June,” Taffer says. “There is an opportunity for a real boom town in the restaurant business, if things move as the science suggests that it would. So we as a company see boom town this summer for the restaurant industry. We see a lower capacity on a very high market demand come summer, and many of our franchisees share that view. So we're getting our franchise deals done now so that we can start working with landlords sooner rather than later. We're concerned that months from now, landlords might get a bit aggressive as the marketplace starts to come back.”

So, how does Taffer ensure that his own restaurant doesn’t become the latest “Bar Rescue” episode?

It starts with his name being on the top of the building. The brand is a big deal to him, and he wouldn’t have done it if he didn’t have the confidence in the systems and procedures put in place. His team has been selective with the store design, menu, locations, and franchisees—every single aspect. Taffer says that most companies would send a corporate training team in for two to three weeks, but his team will be in Alpharetta for three and a half months to perfect and refine the store.

Taffer’s unsure how that episode would go anyway.

“What am I gonna do?” Taffer jokes. “Throw food at myself?”