Brand is maintaining a 100 percent increase in off-premises sales.

It was especially jarring for Grumpy’s, a breakfast and lunch diner with little takeout business and no third-party delivery partners.

“[Off-premises] is not a huge business for us, given our industry—breakfast and lunch,” says Daniel DeLeon, co-owner of the emerging brand. “How many times have you went out and picked up breakfast unless it’s a drive-thru at McDonald’s or some quick fast-food option? You’re not really going to a hometown diner often for to-go.”

DeLeon says staff transitioned well to the new off-premises only model, although business started slow. Consumer confidence was at an all-time low and sales initially dropped 80–85 percent. But numbers sequentially improved each week until dining rooms were allowed to reopen. Grumpy’s implemented off-premises only for about six weeks until it was allowed to reopen at 25 percent. Capacity was eventually increased to 50 percent and now 75 percent. DeLeon notes the brand has maintained a roughly 100 percent increase in off-premises sales compared to pre-COVID figures.

However, Grumpy’s separated itself from other brands in how it carried out the pivot. Even though operations shifted, DeLeon says, the company’s main goal was to maintain the status quo.

One part of that objective meant no changes to the menu. Revamping the food was part of the restaurant’s turnaround when DeLeon and his wife, Megan, took over in 2017. All orders are made to order and made from scratch, whereas before, there were six or seven freezers onsite.

“We didn’t want to eliminate someone’s favorite item, especially during this time,” DeLeon says. “I know a lot of people like the limited menus. I’m not a believer in that. I get why they did it—ease of operation, limited food costs—lot of reasons why that would be helpful. But for us, it really was not about it being easier or cheaper. We wanted to maintain the system for our guests.”

Additionally, Grumpy’s has no plans to delve into the third-party delivery market. DeLeon explains that business is doing well, and the last thing the company wants is to be inundated with delivery orders and have customers waiting inside the restaurant.

So, in a break from most other restaurants, Grumpy’s isn’t going to push that particular channel.

A third leg of the status quo has been maintaining all staff members throughout the pandemic.

DeLeon forwent his salary to ensure everyone had some form of employment. He adds that Grumpy’s had a three-day notice to prepare for the reopening of dining rooms, but the transition was seamless since operations never ceased.

“We knew there would be an end,” DeLeon says. “We would come to a point where we’d roll this back out, and that’s why we wanted to maintain that status quo because just given my experience with store openings and things of that nature, it’s very hard to shut down an operation and then open it right back up. It’s almost like a new store opening. We have to gear back up, prep all the food.”

“ … A lot of the places just furloughed or straight laid people off,” he continues. “They’re scrambling trying to call people back. What type of loyalty do you have at that point where you just kick them to the curb in one hour?” 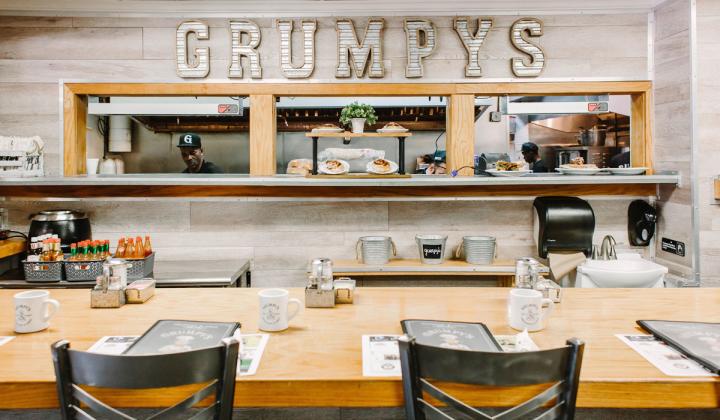 Despite the pandemic, Grumpy’s, which was founded in 1999 by a U.S. Navy cook known as Chef Grumpy, still plans to expand for the first time in its history later this year.

Externally, Grumpy’s used the pandemic as an opportunity to strengthen its bond with the community, which is part of the diner’s DNA, DeLeon says.

This included produce drives and a campaign in which customers could purchase a breakfast for first responders, emergency workers, or anyone in need. The restaurant has delivered more than 700 meals to hospitals, police departments, fire departments, and even Winn-Dixie.

“We did the grocery workers, and they loved it,” DeLeon says. “They’re silent heroes where they’re working hard and stocking the shelves. We brought them food, and they were ecstatic.”

Despite the pandemic, Grumpy’s, which was founded in 1999 by a U.S. Navy cook known as Chef Grumpy, still plans to expand for the first time in its history later this year.

The brand launched a franchise program last year. DeLeon, who has experience as a multi-unit franchisee for multiple foodservice brands and as a franchisor for Restaurant Brands International, says franchising gives Grumpy’s the opportunity to quickly scale into other communities.

The brand currently has two developments in progress in St. Johns and Middleburg, Florida, and is eyeing Amelia Island and New Smyrna Beach, Florida, for expansion—areas that DeLeon says could comfortably hold two Grumpy’s locations each.

He says Grumpy’s hasn’t marketed franchising amid the pandemic, but there’s still been a high level of intrigue in the brand from potential franchisees.

“The interest is there,” DeLeon says. “People want traditional Americana. People love our brand. It’s something you connect with and really, it’s where you want to be during anything like this. … People want that nostalgia. They want to go to a place where they feel comfortable at and know the employees and servers.”

Looking toward the rest of the summer, Florida remains a hotbed for COVID-19 cases. The Sunshine State saw a record 9,585 new cases on Saturday and 8,530 more on Sunday. On June 1, there were 667 new daily cases.

DeLeon says there is a level of concern, but he is confident that Grumpy’s has instituted sufficient and effective sanitary measures. The restaurant has nine hand sanitizing stations and all employees are required to wear masks and gloves. Also, both workers and vendors must undergo a temperature and wellness check prior to entering, and all door handles and high-touch surfaces are placed in anti-microbial wrap to minimize spread of germs.

To him, restaurants are probably the safest place to be with the heightened sanitation and social distancing requirements.