Son of a Butcher

FB Society oversees a wide-ranging portfolio of concepts, including the new Son of a Butcher.

The group is focused on incubating fast casuals through its food halls.

For Front Burner, adversity triggered an epiphany. The new era of dining forced leadership to look at itself internally and formalize its mission. The brand chose to define itself as an entity that has the courage to create and execute experiences never imagined. Front Burner has thrived as a brand incubator, but now it’s doubling down on concept creation.

The transformation, equipped with a sleek new website, will carry forward under a refreshed moniker called “FB Society.”

Jack Gibbons will serve as CEO after eight years as president and chief creative officer. Randy DeWitt, founder and former CEO, will be chairman. Additionally, through a partnership with strategic marketing brand R Circle, Rae Phillips-Luther will take on the role of chief brand officer.

“In a pandemic, you have to think about, is your company going to survive to begin with?” Gibbons says. “If the pandemic hadn't hit, I don't know if we would have made all the sweeping changes that we did. What the pandemic did is make us rethink our existing business and what it looks like moving forward.”

Currently, FB Society’s compass is pointed toward growing fast casuals. The process involves what the company calls “restaurant reimagining.” The CEO says FB Society constantly thinks about how its restaurant could be different or better, what the competition would be, what the availability of market share is, and how it can tie the concept to the consumer. Gibbons calls it “the blue sky,” in which the company is always considering the big opportunity. FB Society then creates the DNA, a step that helps the brand answer why it should exist.

“So we have this process of really figuring out what the business opportunity is, where the brand should live, and then really tying it in to our employees and consumers to find out what that journey looks like,” Gibbons says.

The standalone store was converted from Melios Bros Char Bar, which operated for nearly 50 years before closing in 2019. Gibbons says Son of a Butcher kept the historic look of the building—including the three peaks—and added a new veneer. 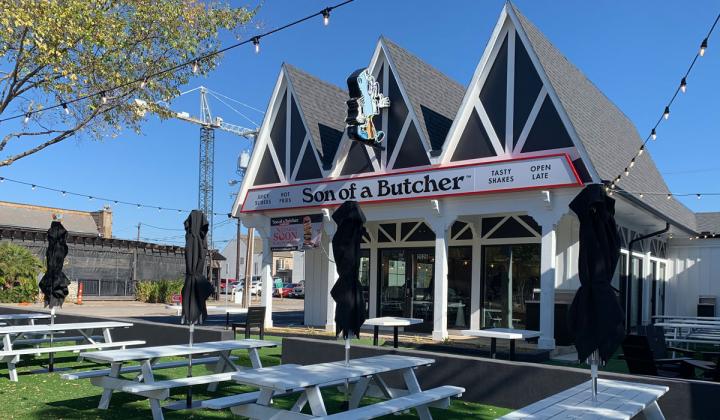 Son of a Butcher

In 2021, FB Society also plans to debut Buttercup, a concept that Gibbons describes as a “new look at chicken tenders from a culinary perspective with interesting flavors and just a whole different look.” The tagline of the brand is “Love Me Tenders,” harking back to the classic Elvis Presley song and movie. Similar to Son of a Butcher, Buttercup’s journey will begin in Legacy Food Hall. The other new fast casual set to premiere next year is the Italian Job. The brand will offer fresh made pasta and pizzas by the slice.

“I think there's a hole in fast casual of higher, better-in-class food choices,” Gibbons says. “And I think for the consumer in a lot of fast casuals, the whole consumer experience is weak, and what we do is think through not only the journey of the consumer with the food experience, but also the journey with the digital experience and how to make it as easy as possible for them.”

FB Society has plenty of resources to test and grow its new concepts. Dallas-based Legacy Food Hall consists of three stories and more than 55,000 square feet of space, enough to house more than 20 food stalls and five full-service bars. In the spring, FB Society’s Food Hall Company will also open Assembly Food Hall in Nashville, which will have almost 100,000 square feet of room, more than two dozen food spaces, and a full-service wine focused restaurant.

Gibbons says the leadership team is full of restaurant junkies who study the business, and so they’re aware of other incubating methods such as ghost kitchens and virtual brands. The CEO says FB Society hasn’t played in that area yet, but it’s certainly considered it.

“For some of the more experiential restaurants, it's hard to imagine Grubhub walking up for a wing shop at one of our higher-end places because a lot of the places that are doing it in their own restaurant, it's to support capacity because they have excess capacity,” Gibbons explains. "Our brands don't have that problem, but as far as creating a brand for a ghost kitchen, that's something that we have talked about and looked at.” 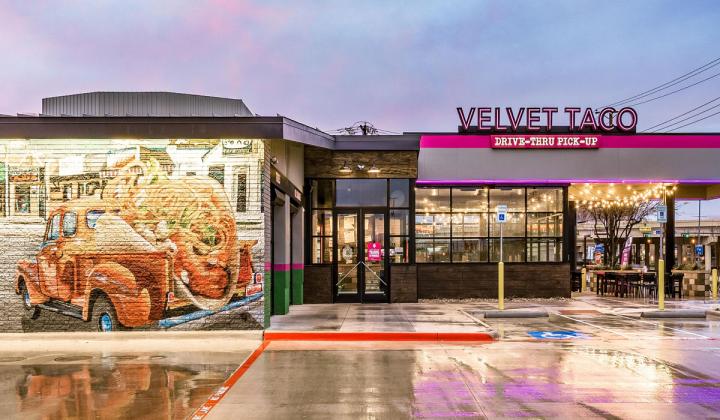 “And I think it's great—like the way that we're using the food hall,” he continues. “It's an excellent way to do R and D in your organization because I think in the past, restaurants in general have not been innovative enough on creating new, exciting product lines, and whether it be through food halls or through ghost kitchens, you can really, for a very low cost, test your ideas and market them and see if there's actually demand for them. It takes a lot of risk out of the business, and the business itself needs less risk.”

Gibbons says the strategy is to return to normal, but there’s been a lot of pivoting along the way. For example, early into the COVID crisis, the Whiskey Cake team added groceries like milk and toilet paper to every pickup order.

Curbside pickup didn’t exist for the experiential brands until COVID, but each restaurant has adjusted to create unique packaging that makes consumers feel like they received something special. Gibbons says the atmosphere “can actually leave the restaurant and go to people's homes.”

“I think that's been the big pivot to help those experiential brands because what we do is we call it experience in a box,” Gibbons says. “… You could enjoy that with your family and bring back memories and feel special about it.”

When the environment returns to normal, Gibbons wants his restaurant group to be in the forefront when it comes to innovation in the restaurant space.

The CEO says FB Society isn’t afraid to take a risk and execute something different and unique, to the point that people say, “Wow, that's a super innovative company that's always trying new and different concepts.”

“For us, fortunately, a lot of them have worked really well, so it's really put us in a leadership position,” Gibbons says.