The emerging chain is garnering interest from both operators and car dealerships.

Henry Ford, the godfather of mass-scale automaking, once said, “businesses that grow by development and improvement do not die.”

Ford’s Garage, a 16-unit chain founded nine years ago less than a mile away from Ford’s winter home in Fort Myers, Florida, fully stands by that message. Almost a century after those words were published, the brand is seeking its largest unit development push in company history, even as the country continues to shake off the remnants of the COVID pandemic.

“As we come out of this mess we got around the world, people are ready to get out,” says brand president Steve Shlemon. “They’re looking for entertainment. They’re looking for some great food and great energy in a restaurant that is unpretentious.” 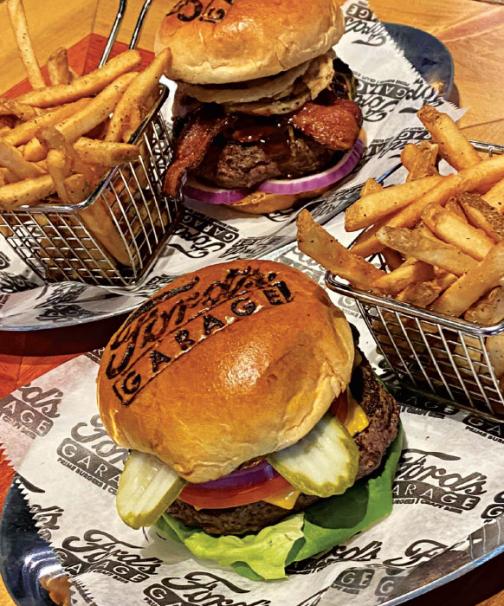 The restaurant, which signed a licensing agreement with Ford Motor Company in 2016, is completely franchised, with 14 stores in Florida, one in Noblesville, Indiana, and another in Dearborn, Michigan. Expansion will start in the Sunshine State, with at least seven planned Florida openings between 2021 and 2022. Ford’s Garage will also build out the Indiana and Michigan markets while venturing into new trade areas, including Texas, Ohio, New York, and New Jersey.

The expectation is to open eight to 10 restaurants next year and then 12 to 15 stores per year beginning in 2023. Ford’s Garage is drawing interest from its core group of franchisees, new operators, and Ford dealerships that want a restaurant in their town. The growth should equate to about one or two locations per franchisee per year.

Shlemon, who formerly served as president of Carrabba’s Italian Grill, president and CEO of Benihana, and CEO of Whiskey Cake and Ida Claire, began his tenure at Ford’s Garage in October 2020. Since then, he’s worked to build a management team to support the chain’s upcoming growth spurt. Those hires include Mike Ronan, director of purchasing; Jessica Tomlinson, director of culinary; and Angelina Sabatini, director of training and development.

“We’ll moderate growth only to the extent that we can manage it and be able to handle it,” Shlemon says. “We’re not about trying to grow fast. We want to make sure we don’t make real estate mistakes, we grow smart, and put the restaurants in the right spot.”

In addition to internal hires, Shlemon uses outside consultants he’s worked with in the past to lead space planning and help Ford’s Garage transform second or third-generation sites.

Each restaurant is sculpted to look like a 1920s gas station and is filled to the brim with Ford memorabilia, including vintage vehicles, fixtures, and gas pumps, as well as a model car suspended above the center bar. Shlemon says much time is spent on musical selections and interior and exterior lighting so that the environment “hits you upside the head before you get into the restaurant.” Playing further into the theme, servers are dressed similar to mechanics and blue shop towels are used as napkins.

The chain is known for its burgers, which are branded with the Ford logo. Other comfort food options include meatloaf, chicken wings and tenders, onion rings, and macaroni and cheese. The beverage program features 150 types of beer—40 on draft—along with wine, cocktails, and nonalcoholic options. Average check per person is $21, a price point that improves customer frequency, Shlemon says.

When the brand struck a licensing agreement with Ford Motor Company five years ago, it became the first and only restaurant allowed to use the blue oval logo, imagery, and archived photos.

“The reputation of Ford Company around the country is extremely strong. Its goal as a company is to be the most trusted company in America. Everybody recognizes the blue oval of Ford,” Shlemon says. “Leveraging that name and having Ford’s Garage under the license agreement with them is critical to us, and we have an excellent relationship with the family and with Ford Motor Company in Detroit. We’ll continue to build that out with the dealership networking around the country.”

This quest for larger buildings differs from the current trend in casual dining. For instance, Perkins Restaurant & Bakery is reducing its prototype to 4,100 square feet, and brands like IHOP and Smokey Bones are planning similar “restaurants of the future” in light of rising real estate costs and surging off-premises sales.

Ford’s Garage remains on course for bigger spaces because of its valued experiential atmosphere. The majority of its business comes through large groups of families on Friday, Saturday, and Sunday, and the restaurants need enough capacity to fill demand and generate a sufficient return on invested capital.

“If we don’t think we can make the design happen and get the energy in there, we just don’t do the site,” Shlemon says, adding that is the reason why the company spends a great deal of time visiting all the sites and perfecting the store layout.

Even though the restaurants adhere to an overarching brand theme and design, they also sport individual elements that set themselves apart. “Each one is going to be a little bit different. A little bit unique. We like that about it—that they’re not all cookie-cutter,” he says.

The brand president says Ford’s Garage will look for new operators who are local and involved in the community; he has no interest in “somebody living in Alabama and developing in Tennessee.” They don’t necessarily need to be restaurateurs, but liquid capital and a solid reputation in the marketplace are both requirements.

If the real estate makes sense, the company may look to build more stores on the campuses of dealerships. The company opened a restaurant in St. Augustine, Florida, adjacent to a Lincoln dealership, and sales have exceeded expectations.

Dealerships, operators, and customers across the country are taking notice—a trajectory that Henry Ford would be proud of.

“We’re really interested in the sales volume of the restaurants,” Shlemon says. “We want to make sure that there’s a good cash-on-cash return with their investment … so that the franchisees can be extremely successful.”